Attorney-Client Privilege, According to Donald Trump

Ever since the arrest of Michael Cohen, Trump’s personal lawyer and bronze medalist in the St. Paul Saul Goodman act-alike competition, the president and his surrogates have been in a bit of a tizzy about attorney-client privilege. It’s very much like when someone insults Trump, and suddenly he remembers that he wants to have stronger libel laws so people can’t say bad things about him and hurt his feelings. Trump seems to have approximately the same understanding of attorney-client privilege as he does of libel law: if he can’t benefit from it directly whenever he feels like he should, that law has got to change!

Attorney Client privilege is now a thing of the past. I have many (too many!) lawyers and they are probably wondering when their offices, and even homes, are going to be raided with everything, including their phones and computers, taken. All lawyers are deflated and concerned!

The entire law profession is “deflated,” floppy bags of skin lining courthouses and gasping their collective last breaths! Someone get the pump! While the shock has largely worn off, it’s still somewhat remarkable when the president does his toddler imitation. 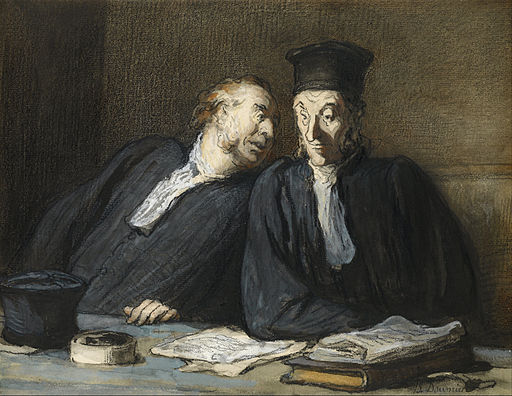 Of course, it should be no surprise that Trump’s thin-skinned criticism is completely misplaced. But why, exactly?

Attorney-client privilege is actually extremely strong. It keeps conversations between lawyers and their clients completely confidential from the state, permitting a free discussion between client and attorney without fear of reprisal or prosecution over the content of the conversation. But lawyers absolutely cannot help their clients commit or cover up crimes. Even someone lazily watching Law and Order in a bar would know this, but Trump seems to not grasp this incredibly obvious idea.

If the court has a compelling belief that a lawyer under investigation has helped his clients commit crimes and could possibly destroy evidence, they can break the seal of attorney-client privilege and raid the lawyer’s office without warning. That is, in fact, exactly what happened to Michael Cohen.

Declaiming that “attorney-client privilege is dead!” because the court thinks Michael Cohen committed crimes is absurd. There ain’t no reason to protect lawyers who commit crimes with their clients. Any honest lawyer will tell you the same, regardless of their political affiliations. Furthermore, the bar for breaking attorney-client privilege is remarkably high. Courts take this stuff incredibly seriously, and won’t rip through this privilege without a seriously strong belief in the likelihood of criminal activity being conducted.

The mistake runs in the family, too: Little Donnie Jr. believes that attorney-client privilege protects basically whatever he wants it to provided a lawyer is within shouting distance. He basically told Congress that lawyers emit a magical fairy dust that settles on your communications and makes them privileged! Like bullshit magic! Get ready for The Avengers: Attorney-Client Privilege War.

What’s the point though?

You might think that a good lawyer or person of average intelligence wouldn’t preserve evidence of a crime. So it’s just a partisan witch-hunt. Why bother pursuing criminals at all?! They’re too smart for us. Let’s just drink a beer and take in a minor-league baseball game.

But in reality, this is incredibly bad news for Cohen and Co.

Even evidence of destroying incriminating documents would look bad for Cohen. And people are historically real dummies about destroying evidence properly: ask anyone who has tried to cover up a white-collar crime. It ain’t easy, and it only takes a small mistake to shut you down. Not that the government exactly sentences white-collar criminals to do hard time, but you get the idea. It’s comparatively hard time, so that’s something!

Even if people do try to cover up their criminal conspiracy, that’s what forensic investigators are for! And mobile phones are like the worst thing to ever happen to criminals. People text each other about crimes with astounding regularity, and if you think that Michael Cohen and Donald Trump have the intellectual chops to avoid that particular pitfall, I’m afraid you are grossly overestimating their ability to think past their own noses.

Will they go to the big house?

This tonight from a former FBI colleague:
??????
“I’ve been an FBI special agent for 20 years and have only seen a handful of searches executed on attorneys. All of those attorneys went to prison.”

Unlikely, my dudes. But getting Donald out of office could be enough. We’ve persisted in the belief that our fellow Americans are, by and large, rational people who can avoid peeing on themselves. A rebuttal of Donald Trump’s parade of duplicitous incompetents would go a long way towards proving that point and improving the global community’s confidence in the U.S.

Despite r/The_Donald’s insistence on Trump’s constant game of five-dimensional chess, the evidence strongly suggests that Cohen and his merry band of venal politicians are barely above the bragging-about-crimes-on-Facebook-with-location-data-turned-on intellectual level.

Learn more about this insanity below:

How to Act Innocent, According To President Apprentice Host