by Justin Andress 5 years ago6 months ago

There is a renegade among us, folks. A man who is breaking rank on the order of the President to keep the public informed on a vast conspiracy perpetrated by the most villainous characters the Deep State Has to offer. This hero’s handle is QAnon — or just Q if you’re nice — and he’s here to blow the lid off the most pervasive conspiracy ever to threaten the God-given glory that is the United States of America.

Either that or he’s a total nut job who has managed to lure the more impressionable parts of the internet into his conservative fever dream. You can decide.

On October 28 last year, 4chan received an early Christmas gift in the form of a post on the site’s /pol/ board. In recent years, the /pol/, or “politically incorrect” sub-section of the controversial message board site has become a hotbed for all the best kinds of people: guys who support the men’s rights movement, bros who think women have physically smaller brains than men, and out and proud Nazis. You know, the cream of the crop (and definitely not a niche assortment of neckbeards who desperately wish they could blame their mediocrity on minorities and special interests.

On that fateful October day, an anonymous poster identifying himself as “Q” visited a /pol/ thread titled “Calm Before the Storm,” (a reference to an ominous Trump quote made weeks prior) and let it be known that he was on a mission from on high.

According to QAnon, he was a high-ranking government official with Q-level security access, the highest government classification available. Further, Trump had tasked Q with dropping “crumbs” of information to keep the people informed about the real truth, even as they were buried in the poo of misinformation shilled daily by the evil Mainstream Media.

This obviously legitimate government official then set about his task, posting a series of questions that are certainly not meaningless: 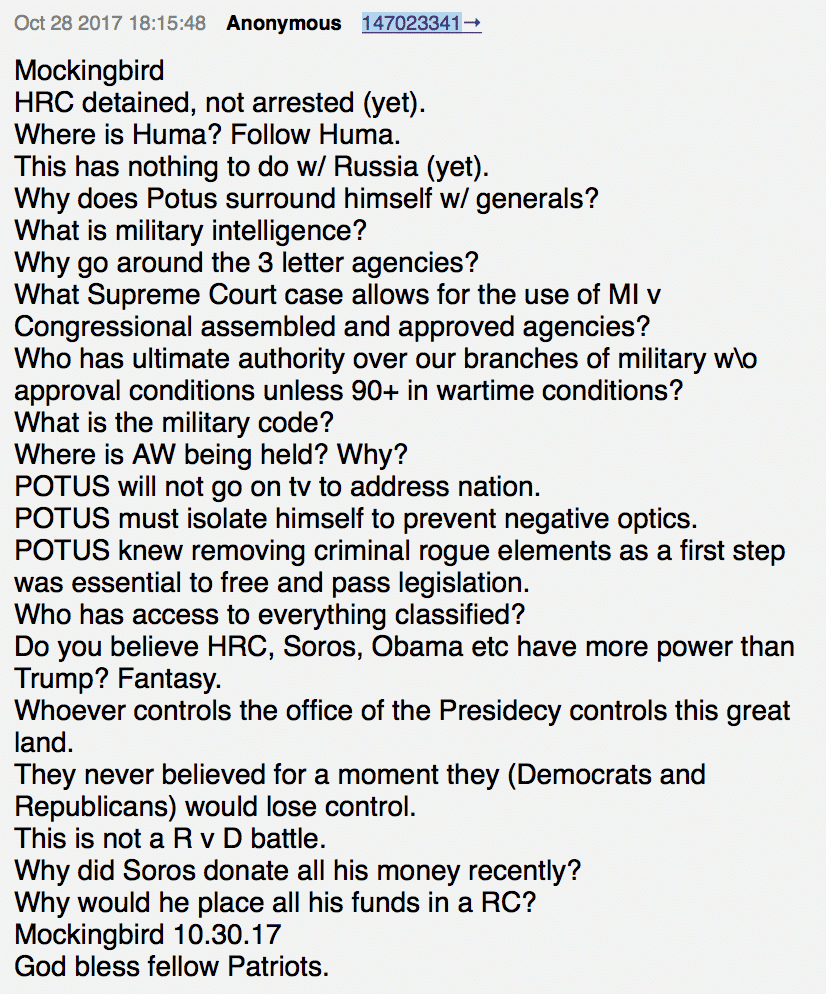 The Nostradamus-style delivery ignited the passions of the right-leaning inhabitants of 4chan who set about dutifully decoding QAnon’s slapdash insanity. Over the next several weeks, Q published several posts, each as cryptic as they were inane.

Here is what they “found out.”

1. Donald Trump Is an M-Effin Genius and Super Patriot

According to old QAnon, the President assessed the political climate during his campaign and realized that the United States we knew and love does not exist. Instead, our formerly glorious country is in the stranglehold of a cabal of evil Democrats that include Nancy Pelosi, Barack Obama, Hillary Clinton (of course), and oddly enough John McCain. These nefarious globalists work tirelessly to rob us of our freedoms, traffic children across the world, and spread the worship of Satan.

Putting his Stephen-Hawking-level brilliance to work, Donald Trump set about taking back the country, seizing control from the deep state, and making America Great Again.

The plan would be known as, “The Storm.”

2. Robert Mueller Is a Double Agent, Working for Trump

Don’t be fooled by the repeated attempts from Trump to get the special investigator fired. It’s all part of a labyrinthine plot to get to the real bad guys. Because every fairy tale needs a villain, QAnon has propped up the GOP’s favorite targets in his story.

Okay, so Q claims that Donald Trump cozied up to Vladimir Putin and the Russians in an attempt to spark a false flag operation. See, Trump’s whole clumsy, greedy schtick is a clever ruse designed to give Mueller the freedom to investigate the real people who are in league with the Russians: Barack Obama, Hillary Clinton, John McCain, rich person George Soros, and HRC advisor Huma Abedin.

A total WITCH HUNT with massive conflicts of interest!

Trump calling the Mueller investigations a total “witch hunt” has been a complete smoke screen.

3. Hill-dog and Barack Are Also In League With the Muslim Brotherhood

Apparently, they’re also Satanists! Pretty much any diabolical thing that someone can get into, these guys are working on.

4. The Democrats Are Actively Working to Control the Black Population

When you’re running a government within a government, maintaining an iron grip over the minority population is critical. In Q’s own words:

For anyone keeping score, that last bit of “history” is Trump’s favorite kind, the patently false kind.

5. The Omnibus Spending Bill Was a Cover for Trump’s Crackdown

In March, the Republicans passed a $1.3 trillion spending bill; according to QAnon, this bill was actually a crucial part of Trump’s plan; it was designed to gift the CIA, the FBI, and those other three-initial guys with a massive infusion of cash that would allow them to take back the country.

See, you thought that Donald Trump really wanted to veto the spending bill because it wasn’t racist enough:

I am considering a VETO of the Omnibus Spending Bill based on the fact that the 800,000 plus DACA recipients have been totally abandoned by the Democrats (not even mentioned in Bill) and the BORDER WALL, which is desperately needed for our National Defense, is not fully funded.

But it’s all an act to depose the real evil plaguing our society.

In all fairness, this is just Q piggy-backing something called “Pizzagate,” a debunked conspiracy theory that claimed Hillary Clinton and her cohorts were trafficking children and performing Satanic rituals out of a pizza joint in the nation’s capital.

Fortunately — according to Q — Trump was hard at work liberating these dens of iniquity. He just didn’t let the press congratulate him for it, because he didn’t want to alert the culprits (or some bull crap like that).

This story gained so much traction that even Roseanne Barr bought it. In a now-deleted tweet, the sitcom actor stated:

“President Trump has freed so many children held in bondage to pimps all over this world. Hundreds each month. He has broken up trafficking rings in high places everywhere. notice that. I disagree on some things, but give him benefit of doubt-4 now.”

She’s even gone so far as to request a chat with Q himself … no word on whether or not it’s come to pass.

QAnon Is Out There, and the Truth Is Not Safe

Kevin Williamson, a contributor to the National Review, called The Storm “a catharsis.” He said that it was hokum dreamt up as a means of finding relevance in our “safe and boring” times. Comparing the turbulent times Trump administration to the long-forgotten political scandals like the Mulligan letters (because both seem important right now, but neither will matter 100 years from now), Williamson explained:

“If there isn’t some secret cabal pulling the strings behind the scenes, then that means that we are — God, no! — responsible for the state of our own lives and, corporately, for the state of the union. If things are as they seem and got here in the ordinary way, then blame will fall as the rain does on the just and the unjust alike.”

In other words, The Storm allows people to believe that something huge is about to happen because nothing significant is going on in our own times.

Williamson’s is an overcomplicated explanation. The Storm is at its core a theory concocted by a bunch of ill-informed, xenophobes who desperately want to believe that the man they helped elect isn’t a corrupted pile of spray tan residue. It might be a catharsis, as Williamson says, but it’s not a release from boredom, it’s a release from the truth, that Donald Trump truly is just a windbag who’s getting scalded in the court of public opinion for his many (very real) past transgressions.

How Conspiracy Theories Go Viral On Facebook [With Data, Charts And Stuff]