Childish Adults Who Felt The Need To Troll Teenage Activists...

Twitter trolls aren’t just disguised bots being run by countries overseas who are trying to meddle with our lives. They’re also grown adults who don’t know how to behave on social media. Respected members of the media, politicians, entertainers, and more. Recently the survivors of the Parkland shootings in Florida have been major targets, in particular, those who’ve had the nerve to speak up for gun control. These are some of the adults who are targeting teenage activists and childishly trolling them on Twitter.

David Hogg Rejected By Four Colleges To Which He Applied and whines about it. (Dinged by UCLA with a 4.1 GPA…totally predictable given acceptance rates.) https://t.co/wflA4hWHXY

Laura Ingraham clearly has some serious self-esteem issues, which she childishly took out on the young activists born from the Parkland shooting in Florida. Either that or she has been selfishly using their tragic experience to get more public recognition and ratings for her show. Conservative or not, trolling kids on social media is absolutely pathetic. And yes, they may be having some seriously adult conversations, but if they didn’t speak up then who would? One of the first instances this occurred was in response to student turned activist, Sarah Chadwick. She hilariously tweeted, “We should change the names of AR-15s to ‘Marc Rubio’ because they are so easy to buy.” Ingraham didn’t like this though and called the teen out on Twitter by quoting her and writing “HOW TEENS SPEAK TO AND ABOUT ADULTS” implying that she shouldn’t be taken seriously. In her tweet, Ingraham labeled her as a Stoneman Douglas sophomore, which Chadwick corrected in a modest response informing the newswoman that she’s actually a junior. Gotta learn to fact check!

That was just the beginning, however. Ingraham also trolled David Hogg who is another survivor of the Parkland shooting. Her tweet, seen above, publically shames him for being rejected from a few of the colleges he applied to. The article she links to quotes Hogg where he talks about not being accepted to several schools, and it might have to do with his recent activism but he doesn’t have much time to worry about it. He was accepted to a few schools as well, and none of what he said should at all be labeled as whining. Ingraham later apologized, but only after receiving a lot of backlash from her post. These kids are making a huge impact on the world while other teenagers their age are more concerned with finding a prom date and photoshopping pictures for Instagram. Regardless of where or if they go to college, their future is certainly looking bright. 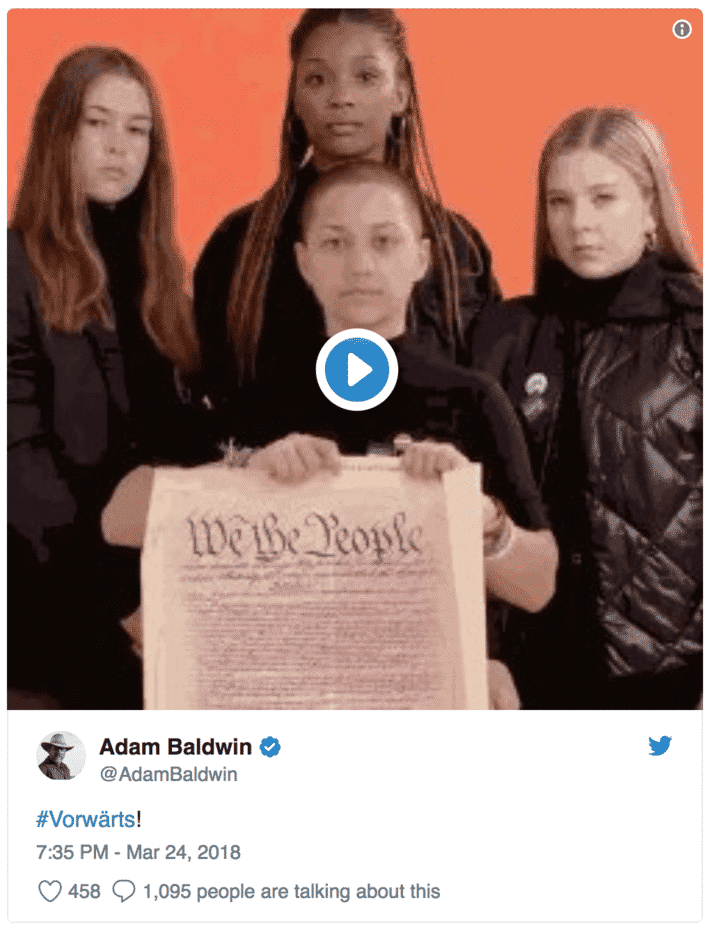 No relation to the famed Baldwin brothers, Adam Baldwin, who is best known for his small roles in Independence Day and Full Metal Jacket, decided to share the infamous fake picture of Emma Gonzalez of her ripping up a copy of the U.S. Constitution. Whether he thought this photo was real is unknown, as his political beliefs are a bit unusual. Apparently, he has been registered as a Democrat since the ’80s but has considered himself a “small government conservative libertarian” (whatever that is) for the past few years. Known for his absurd tweets, Baldwin captions the Photoshopped GIF with “#Vorwarts!” which translates to “#Forward!”. Vorwarts was a small German publication that was short-lived running for just one year, 1844. It was considered the only uncensored radical publication and was run by activists of the time who later went on to develop the Communist League, a revolutionary socialist group.

Baldwin defended his tweet saying it was “political satire” but after doing just a little bit of research into his hashtag, it’s clear that he was trolling her for being a leftist as they say. All because the poor girl was traumatized by a school shooting where several of her classmates were killed and she dared to speak out and demand gun control. Baldwin is a bit nuts though, and this isn’t his first ridiculous tweet. Back in 2014, he posted this head-scratcher that read, “What’s wrong, now, with a father marrying his son for love & to avoid tax penalties?” Ummm, huh? 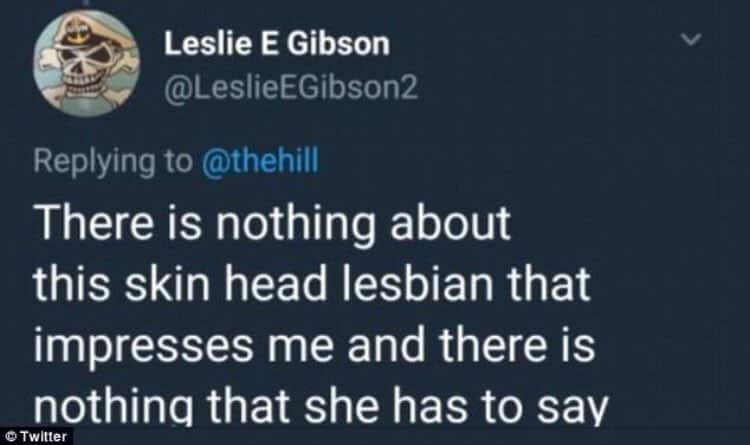 This guy takes stupid to a whole new level. Imagine ruining your political career because you couldn’t help trash talking some kids on Twitter? That’s what this guy did. Leslie Gibson was a State House candidate in Maine who blew it when he called Gonzalez a “skin head lesbian” in response to an article about her having more social media followers than the NRA. Sounds rational, right? (Also, umm, it’s *skinhead…) Gibson didn’t stop there however and continued to dig his grave by sharing that he didn’t think Gonzalez should be allowed to call herself a survivor since she was on a different side of the school when the shooting occurred.

Once again, he didn’t stop there. Gibson also attacked Hogg, who said that NRA spokeswoman Dana Loesch “owns” members of Congress, by calling him a “moron” and a liar. In probably what is one of the most epic forms of backlash any troll has ever experienced, Hogg used his platform to share what Gibson wrote and to encourage other Maine residents to run against him, as he was running unopposed at the time. Not only did Gibson find himself with an opponent but he also received so much negativity in response to his tweets that he deleted his Twitter and dropped out of the race. He made some lame apology and released a statement that he’d be walking away from the candidacy with his head held high. Hopefully not so high that he thinks he can ever run for a political position ever again.

Insanely inappropriate, to say the least, radio host and conspiracy theorist Alex Jones thought it would be appropriate to create this video where he dubbs Hogg’s gun control speech with one of Hitler’s. He then takes things even further by creating another video where Gonzalez is portrayed as a member of the Hitler Youth. Jones talks about how he feels that Hoggs and Gonzalez are all about control and is paranoid that NRA and Second Amendment supporters will somehow be banned from social media and forbidden from talking about their precious guns.

Other insane conspiracy theories people are coming up with are that these activists are actually paid crisis actors, that Hogg is covering up something related to his father and the FBI, and that Gonzalez bullied the shooter making the school shooting her fault. It should be these kids who are being immature and causing a ruckus on Twitter, but it’s not. Surprisingly, it’s the adults who need a lesson in morality and I have a feeling that these young activists are about to teach them something.