I have halfheartedly joked about World War 3 starting during the Trump administration in many articles over the last few months for a few simple reasons. One, joking about something that scares the absolute piss out of me helps me (and come to find out, quite a few other people as well) cope with those exact fears.

Two, honestly, it just seemed very likely. America and how we are viewed on a global scale has shifted in the last few years, and now you can feel the slow-simmer we h ave been sitting in coming to a boil. You would need five hands to count all the countries who don’t like us right now. But even I didn’t see THIS coming this quickly. 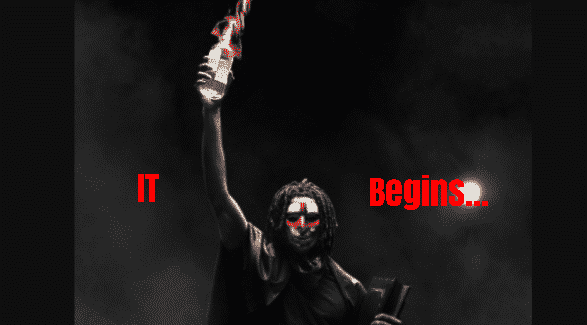 Something happened last night (this morning).

Some insanely juvenile part of me almost wants to say, in jest, I told you so, but this is far too grim to even joke like that. Last night, on Friday of the 13th day in the 2018th year (yeah, the date does make all this slightly creepier), the U.S., the U.K., and France (who the f*ck saw THAT trifecta coming?) cooperated on an air strike (close to a thousand missiles, it is speculated) against a specific spot in Syria where it was believed chemical weapons were being stored. RUMORED by the way.

Bill Clinton did an air strike during his run under the same belief years back and ended up blowing up a factory where medicine was made for sick locals, which is, well, pretty dark, said with all due respect to all you grass-fed ‘patriots’ yielding guns right now. Actually screw that, not gonna walk on egg shells for psychopaths who think this sort of barbaric sh*t is okay, ESPECIALLY without OUR input as a people. Really, we just started World War 3.

While one can understand why such drastic measures were taken (if they were right about the location, which NO ONE is answering or stating yet), and it could also be said it is nice to see a unification between France, the U.K. and the U.S right now, we may have just started the ball rolling in what could turn out to be a VERY ugly turn of events (for all sides involved.)

Many people took to social media essentially declaring this the unofficial start to World War 3, like I just did but maybe shouldn’t have but still stand behind. Yes, it does seem a quick and extreme conclusion with which to jump, but when three countries come together to attack another country, that is a World War, down to the very definition (ALMOST).

As you can imagine, the public had a lot to say:

Trump’s decision to launch airstrikes against Syria without Congress’s approval is illegal. We need to stop giving presidents a blank check to wage war. Today it’s Syria, but what’s going to stop him from bombing Iran or North Korea next?

Theresa May proves yet again with Britain’s involvement in air strikes against Syria last night, without allowing a debate in parliament, that she is no friend to democracy and that the only voice she listens to is Donald Trump’s. #NotInMyNameTheresaMay

“AGAIN, TO OUR VERY FOOLISH LEADER, DO NOT ATTACK SYRIA – IF YOU DO MANY VERY BAD THINGS WILL HAPPEN & FROM THAT FIGHT THE U.S. GETS NOTHING!”

Government: “We were all moved by the terrible suffering caused to people in Syria by bombs”

“So you’ll take in some refugees?”

So as you can see, many people are feeling a myriad of emotions about the undemocratic events that unfolding unbeknownst the people in the very countries doing the attacking (kind of proving democracy, at least here in the U.S., is very much a facade hiding the darker truth that we have no voices in the moments that truly matter).

I ask of all of you, at what point do WE become the terrorists? Really, ask yourselves:

It’s a scary thing to try to comprehend, but a fair question for me to pose. And honestly, we cannot declare this World War 3 (even though that was trending at one point) yet for only ONE simple reason:

Technically, World War 3 does not begin until we are officially attacked back, but I can also say to you that, without question, that is the scariest f*cking thing I have ever typed, and this is my 7,042 article I’ve had published. No, not kidding. And I wrote about some straight up scary sh*t SPECIFICALLY, and this still overshadows any of that by miles. Like, blast radius miles. See, joking in the face of terror, it is my shtick. Beats pissing your pants, which tweets like the following make me wanna do:

Again, I am by no means STRAIGHT-UP declaring this the start of World War 3, but history repeats itself. Fact. I also am wise enough to know that last night was the start of something awful, and now we just have to wait and see just how awful. Perhaps this will all be over before it even begins, but I have to call a spade a spade here. The truly philosophical approach is, did we all just start World War 3, or did we end it before it began?

There is no clear answer yet, unfortunately. Or perhaps FORTUNATELY depending on how extreme Syria’s response will be.

Remember, no action is without consequence, no matter WHICH side you are on, be it “winning” or “losing”. Though in war, as many far wiser than I have stated, there truly are no winners.

Another Foretelling of World War 3 From Last Few Weeks

~Bob Dylan, Masters of War (as covered hauntingly by Pearl Jam, above)~