Donald Trump could have been born in a suit. Even before he managed to snag the role as president, it was unusual not to see him in one, so on those rare occasions that he’s caught in something different it’s like getting an unexpected glimpse of Big Foot. Joan Rivers would have had a fit over some of these outfits, but since the Fashion Police can no longer weigh in, we’ll just have to make due without them. Let us know what you think of Trump’s worst fashion choices over the years! 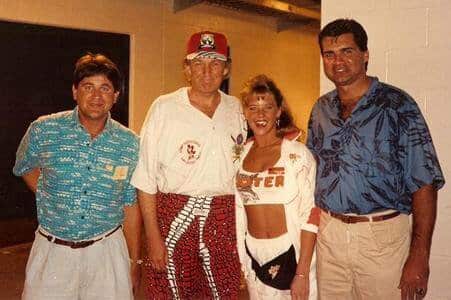 Leave it to Trump to take advantage of an opportunity to take a picture with a Hooters waitress. Any excuse to put his hands on a beautiful woman, especially a blonde! Obviously, this photo was taken quite a few years ago, but there’s no excuse for whatever that is that Trump is wearing. Is that a skirt? A towel? Or are those pants with ostrich legs on them? Whatever they are, they’re a tad oversized or as the president would say they’re “YYUUUUGGE!” His loose tucked in shirt isn’t doing him any favors either. He looks like a teenage girl who got in trouble for not following the dress code and was forced to wear one of those oversized t-shirts provided by the school. Not cute! 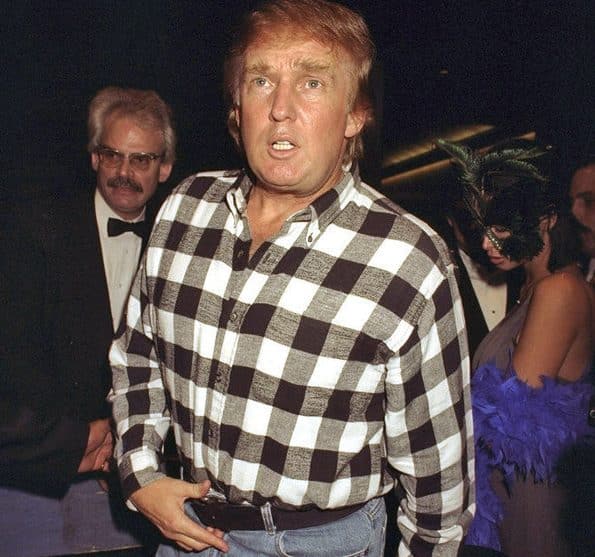 This photo of Trump rocking the farmer joe look may have been taken at a Halloween party, but it’s hard to say if he’s dressed in a costume or not. Shocking, to say the least, that the president ever owned a pair of jeans, this flannel shirt is either his attempt to appear casual at the party or a half-assed attempt at a cowboy costume. Considering the party he was attending was being thrown by Naomi Campbell and Kate Moss to start off Fashion Week, you’d think he would have stepped it up a notch. At least throw on one of the ridiculous trucker hats we all know he loves. Speaking of which… 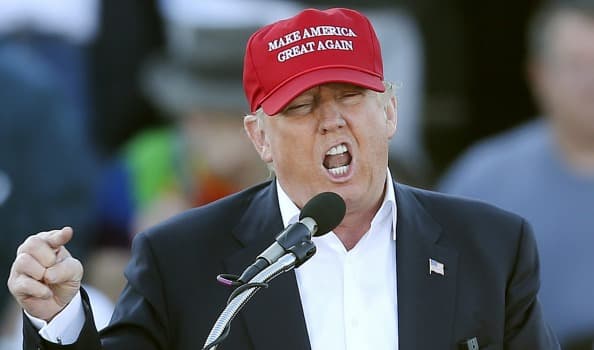 Trump’s slogan may have helped him win the election, but wearing an obnoxious red trucker hat with a suit is a huge no-no. Certainly, not his first time wearing one, as he’s rarely seen on the golf course without a hat on his head, but this fashion choice is not only bad, but it started a trend. Trump supporters all over the country are wearing their “Make America Great Again” trucker hats with suits, t-shirts, biker vests, and dresses. A look that is both hideous and absurd. 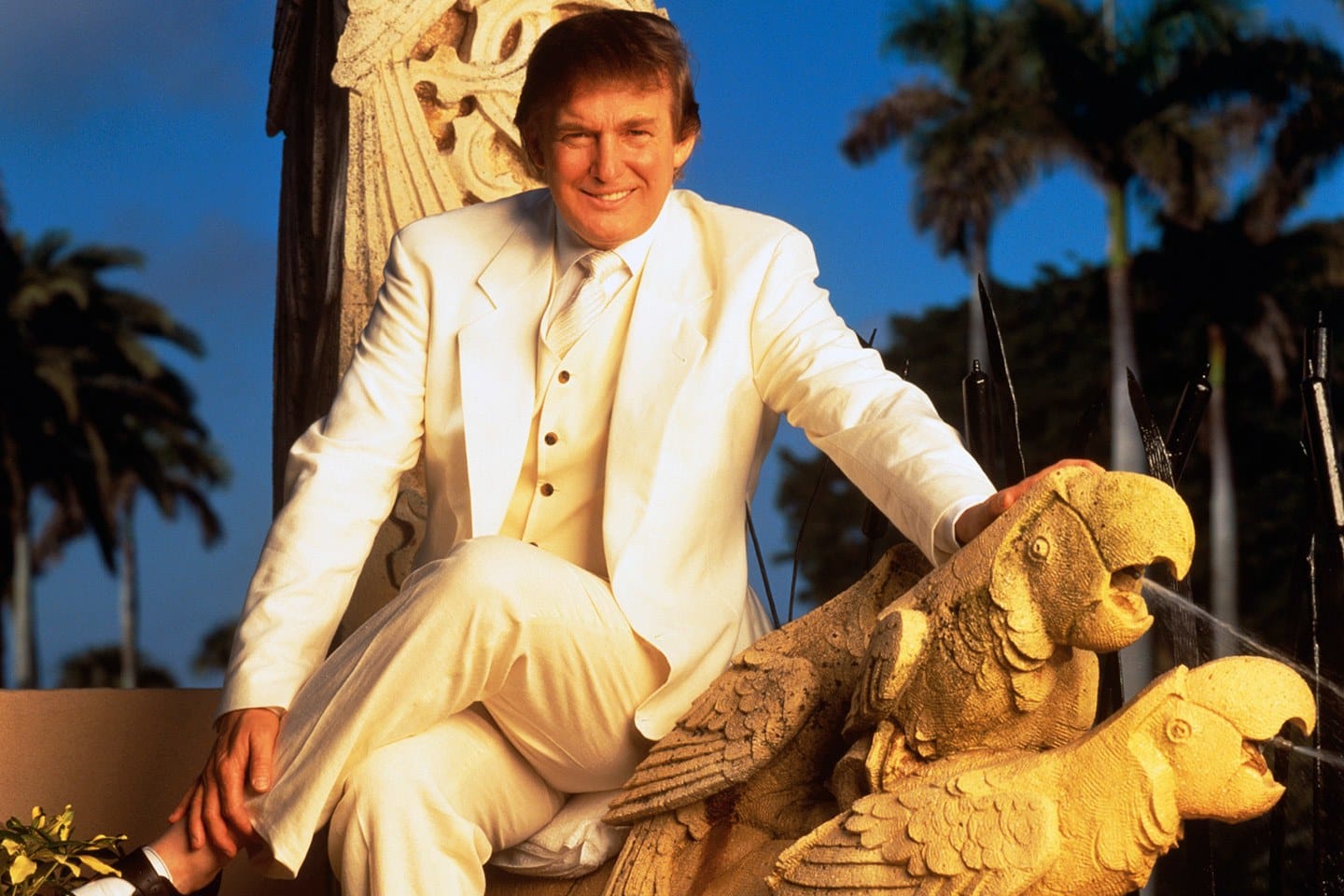 Wow, if those parrots could talk! Trump wore this white monstrosity for a photo shoot years ago that most of us have become familiar with since he got in office as it’s the same one where he has a young Ivanka sitting in his lap. Even if it’s after Memorial Day, an all-white suit should be saved for wedding days, pimps, and ’70s discos. Hopefully, this suit has ended up in a donation bin since this picture was taken. 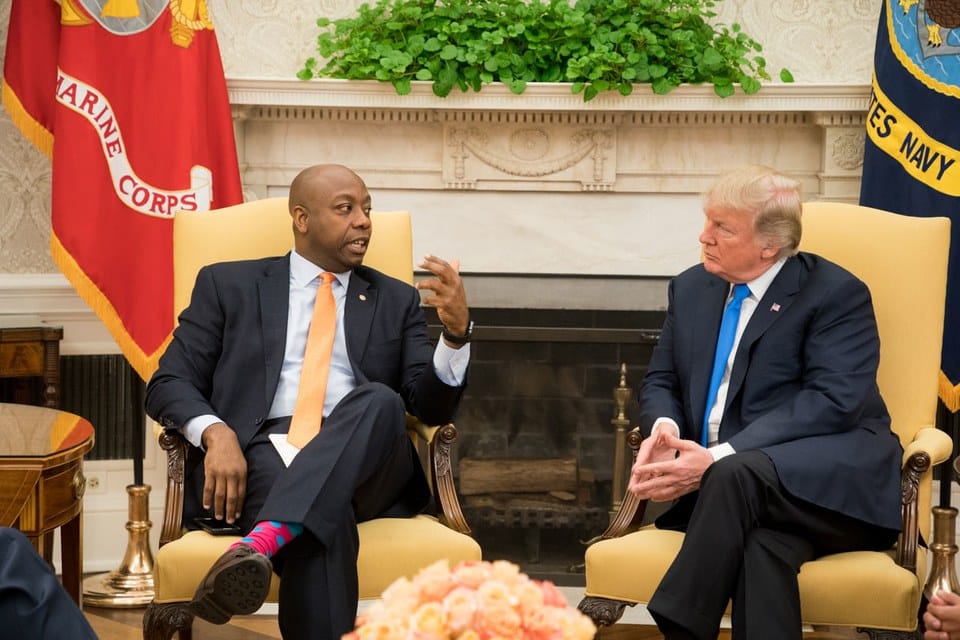 It looks like Trump had a rough morning on the day Senator Tim Scott of South Carolina stopped by the White House for a chat. Either that or he pissed off Melania right before she laid out his clothes for the event. If you haven’t noticed yet what’s wrong with this picture, take a closer look at Trump’s suit. Notice it now? The suit jacket belongs to a navy ensemble while the pants are clearly black. The fashion world had a field day with these photos, completely distracting the media from the fact that Scott is wearing pink polka-dot socks. Likely Trump didn’t let his wife pick out his clothes again after this incident.

This Other Farmer Joe Look 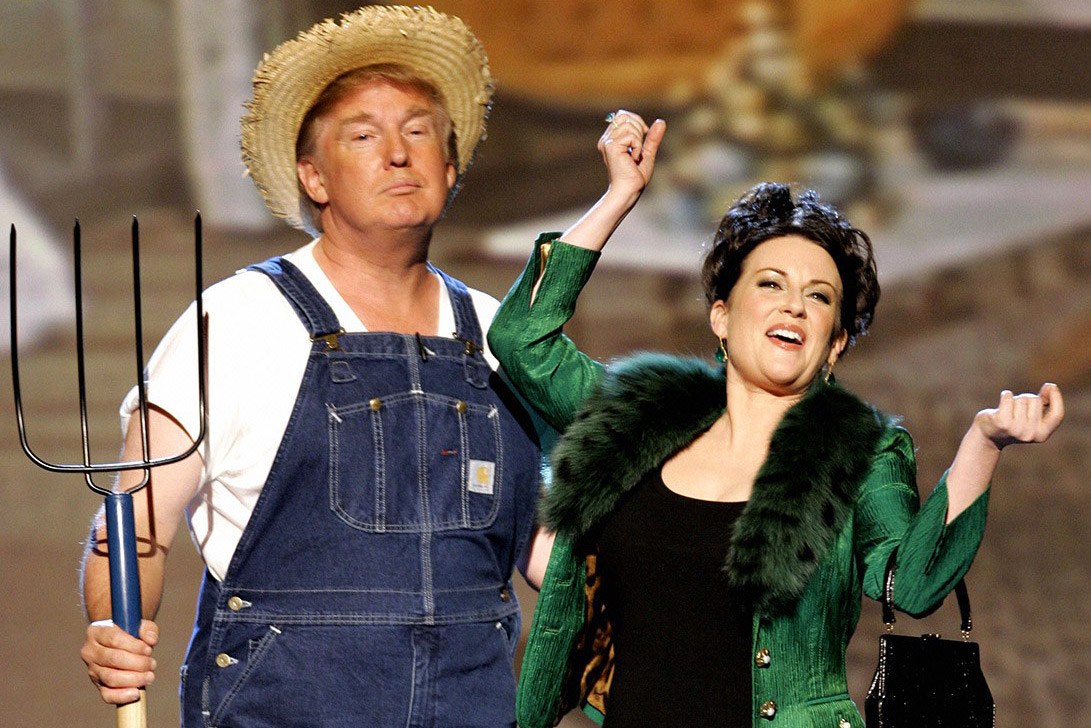 Now, this is what Trump should have worn to Naomi Campbell’s Halloween party. The world seems to have forgotten this 2005 moment at the Emmys, so obviously we need to bring it up again and discuss it at length. Trump walked out on stage with Megan Mullally singing the Green Acres jingle, keeping in line with the award show’s American Idol theme. If you’re unaware of what Green Acres is, don’t worry you’re not alone. It’s a show from the ’60s about a lawyer who moves to a farm to take on a simpler life, hence Trump’s overalls and pitchfork. Luckily for all of us, this epically hilarious moment was caught on camera so we get to bask in Trump’s humiliation as often as we’d like! 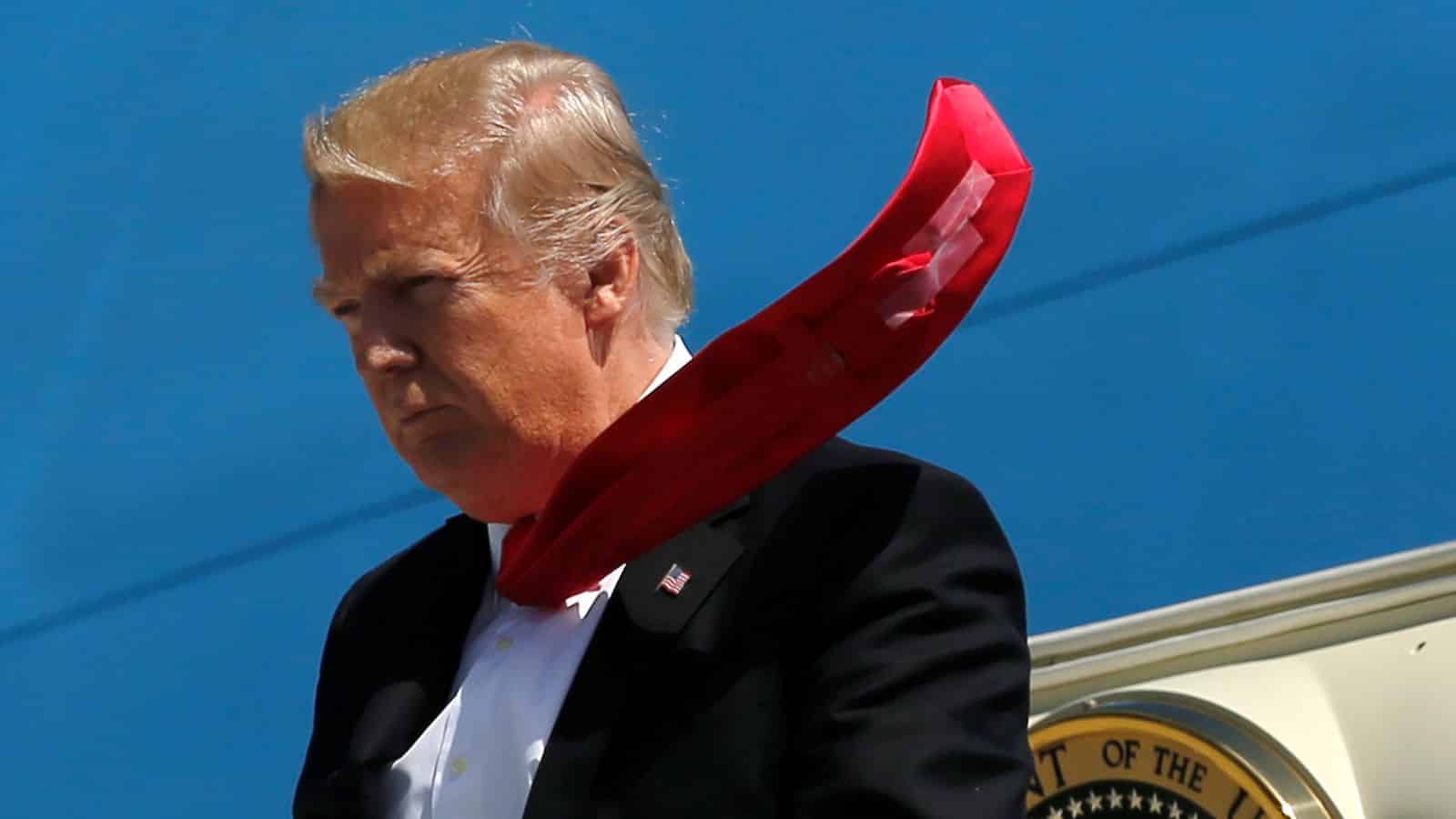 No, your eyes aren’t deceiving you. That is Scotch Tape holding together the president’s tie. Far from the only time Trump has been caught doing this, it makes us beg to question what the deal is. Does he not own a tie clip or a pin? Well, we know he possesses at least one pin because he’s wearing one on his collar. Why not just move that pin from the collar to the tie? It would be far classier than taping it together, but it’s just another one of the president’s many quirks. You’d think someone would have stopped him from doing such a thing by now. 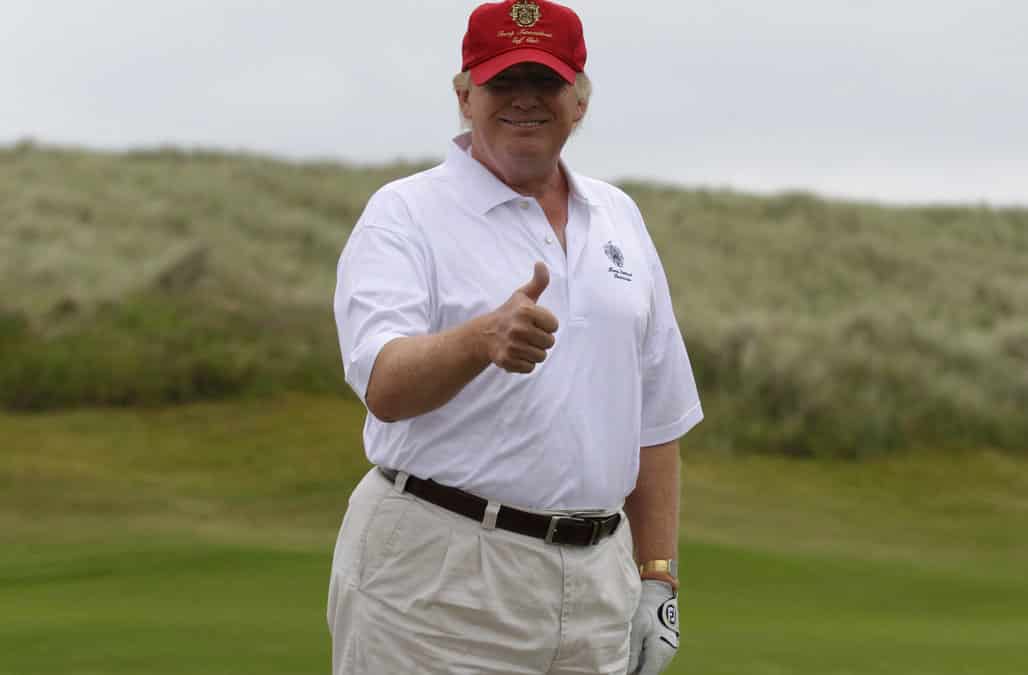 Nothing is more nauseating than a pear-shaped man with his shirt tucked into his pants. On the golf course or not, this is an absolute fashion crime that should be accompanied with hefty fines. These particular pants don’t fit Trump very well at all and give him a very womanly figure. In fact, if he were a woman he’d have a pretty nice rear but since it’s Trump, I think it’s safe to say that no one wants to see this. He needs to take note of how Obama dresses while on a golf outing. Particularly, he needs to see how Obama and pretty much every man in the world allows some room for the belly to breathe during the tucking process. Otherwise, the public gets an eyeful of all that junk in Trump’s trunk as his tucking technique shows off far too much of his figure. Or, rather, lack thereof.