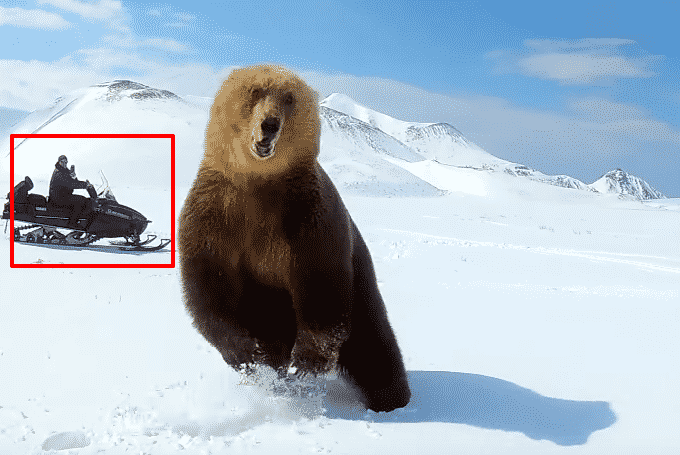 Okay, this really happened, and honestly, it all happens so fast that it is actually scary to watch, but then it gets funny, in a kind of sad way. So two snowmobilers were hitting the snowy trails, one with a GoPro attached to his helmet to catch all the action. Suddenly (and literally kind out of of nowhere) a rather large bear appears, and it clearly wants to chow down on some tasty snowmobile-human combo meal, with the GoPro user clearly being the desired main course.

Nature is not one to be toyed with.

Now obviously, the man escaped the clutches of the bear, or we wouldn’t be sharing this story with you, but upon trying to catch the perfect screen grab for this article, I unintentionally noticed that his friend does not drive off or attempt to scare the bear (which is actually possible, by the way) but actually, decided to stop behind both his friend and said bear and capture his friend’s demise on his cellphone, as captured perfectly by the lead-in photo accompanying this article:

Listen, I am not trying to judge, but when a close friend stops to film your violent death to then post on social media, you may want to find some new friends who, you know, actually DON’T wanna see you die?

Another Animal Teaching Another Stupid Human Being A Valuable Lesson

For anyone wondering who this MyPillow guy is, this article will tell you all about him and his role in Trump’s last struggle for power. It is almost second nature for the internet to find humor in many serious events in government. Could this be this generation’s way of coping? We don’t really know. Let’s… END_OF_DOCUMENT_TOKEN_TO_BE_REPLACED

Trump is the First American President who gets impeached for the second time. Trump’s second impeachment became a trending topic on Twitter after the terrifying terrorist attack on Capitol Hill on the 6th of January. Twitter is at it again, being flooded with memes and Twitter jokes surrounding Trump’s second impeachment trial. Americans are trying to… END_OF_DOCUMENT_TOKEN_TO_BE_REPLACED