Mind-Blowing Tweets Show Just How Far Republicans Will Go To...

They’ll do anything to save an unborn fetus from abortion, but when it comes to the lives of actual children Republicans seem to only care about keeping their vast gun collections out of the hands of the government. Not that it’s even realistic for them to take them all anyway.  So they prefer to do nothing, because as long as it’s not their kids being killed then their lives can go on uninterrupted. Those of us on the other side of the political spectrum, at least those of us with any form of common sense, know that something needs to be done. We might not know what exactly, but stricter gun laws are as good a place to start as any. Republicans have some of the most mind-blowingly idiotic arguments as to why gun control isn’t an issue, and thankfully they’ve tweeted some of them for us to enjoy. Check out just how far they’ll go to keep their precious guns.

One of the things Republicans just love to do is to compare numbers to irrelevant matters. This guy, for example, decided that he needed to inform his Twitter followers that the most gun-related deaths are caused by suicide, not school shooters. What he’s saying is true, there were significantly more suicides in 2017 using firearms than there were deaths caused by mass shootings, but the point of stricter gun laws has clearly gone over his head. Keeping guns out of the hands of teenagers may not prevent school shootings altogether, but it will certainly give kids sitting in class each day ease of mind. Yes, kids can still go on the internet and create some kind of explosive device and they can certainly steal an assault rifle from a parent, but the funny thing about kids is when they have to put even an ounce of effort into something, they tend to give up. Even if they don’t, this kind of setback might give them the moment they needed to rethink their actions. So, yes, mental health is a huge issue in America but gun control is as well. One has very little to do with the other.

Wherever your political beliefs fall, it’s safe to say that pretty much all of us are against any form of dictatorship forming in America. We’d like to think that our government protects us from tyranny, but if it doesn’t, your guns aren’t going to defend us from squat. They might help you to put up a good fight, but when it comes down to it the military is going to stay on the government’s side. If you’re trying to avoid having a dictator in charge, perhaps stop voting men like Trump into office! What really irks me about this tweet, however, is that it implies that masculinity and guns go hand in hand. So, females who run out and buy a gun tomorrow are then considered masculine? And all of these teenage boys who are so desperate to become grown men, all they need to do is buy a firearm? And this, alongside a bit of training I would hope, is all that is needed to overthrow our government if warranted? What an incredibly disturbing thing to not just think but to share with the public. 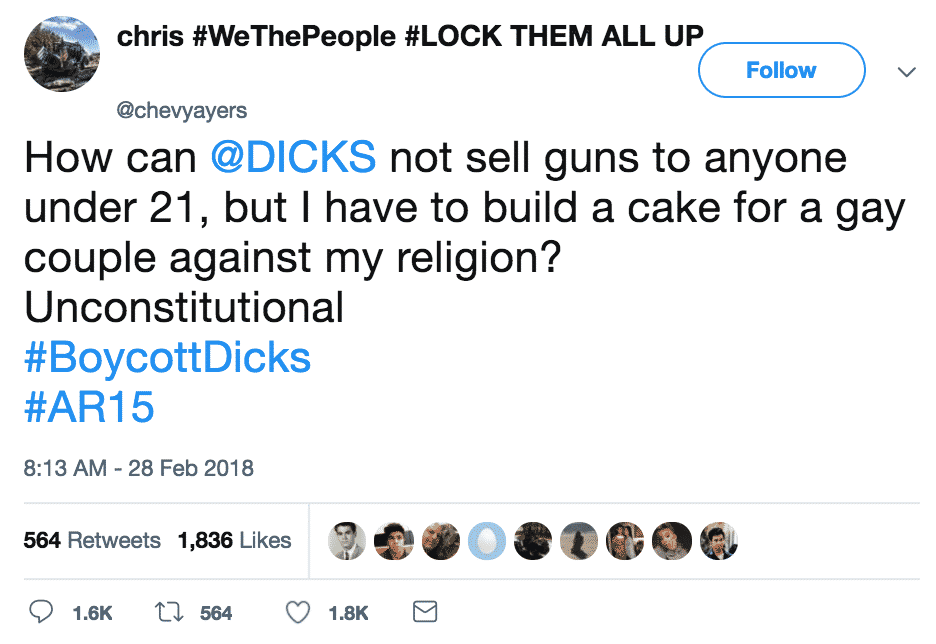 There are so many things wrong with this guy’s tweet it’s hard to know where to begin. First, let’s start with DICKS’ decision to increase the legal age to purchase a gun at their stores. Many major stores that sell assault rifles have chosen to change the legal age for buying firearms as it helps keep them out of high schools. Legally, any business can do this as it’s not unconstitutional as long as the same rule is applied to every customer. What this guy on Twitter isn’t aware of is that refusing to sell a couple a cake simply for being a member of the LGBT community is discrimination. Also, cakes aren’t built. They are made, or baked, or decorated but definitely not built. And my final statement is that DICKS doesn’t care if this guy boycotts them. Besides, if he’s running around “building” cakes for clients he likely doesn’t have the money to spend in their store anyway. 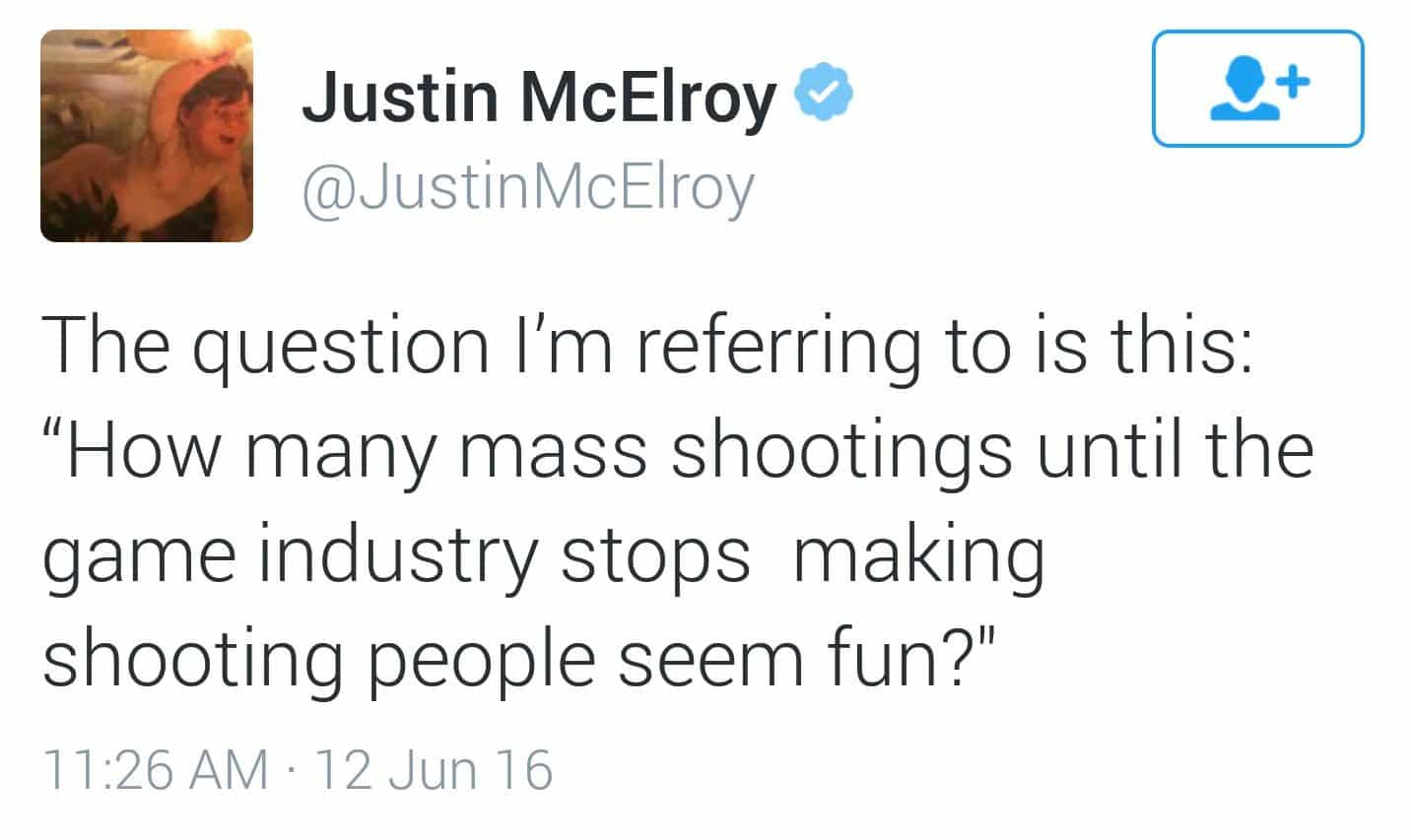 Whether it’s accusing video games or terrorists, Republicans are always trying to place the blame on anything other than gun control after a mass shooting. If a video game is enough to inspire someone to shoot up a school, club, or concert then we really need to reconsider our country’s education system. There’s a clear line between entertainment and real life, and if someone doesn’t know that then it’s because they are ill. Not because they played too much Call of Duty growing up.

Only a Republican would think it was appropriate to compare the death of hundreds of children to pizza. There’s absolutely no correlation between heart disease and mass shooting other than the two end up putting a lot of people in the morgue. Likely if pizza slices were running around slaughtering people in violent and painful ways we’d have to say goodbye to everyone’s favorite drunk food, but that’s far from the case. Since we can’t label any individual as someone more prone to shooting as that would be discriminatory, stricter gun control laws are the next best solution. Unless people are ramming pizza down the throats of those on the brink of going into cardiac arrest, this comparison has absolutely no leg to stand on. Is that the expression?

Have you noticed that while Republicans seem to have a lot to say on the gun control matter, they’ve yet to propose a reasonable solution? All they care about is that they can no longer send little Jimmy down to the Walmart to pick them up a pack of smokes and that AR-15 they’ve been eying. Now they have to get off their lazy butts and go get it themselves. The exercise might just do them good since I heard the death rates for heart disease is through the roof these days.