Hideous Trump Tattoos That Will Make You Feel Better About...

Trump supporters are all about the Trump t-shirts, Trump hats, Trump bumper stickers, and now it seems that when they’re not yelling the president’s name that they’re taking the plunge into a more permanent representation of their political alliance with Trump tattoos. While most of these Trump fans likely consider their new ink to be “winning” they were clearly performed by drunk amateurs on Pogo sticks, and even that’s being generous. Hideous yet hilarious, these Trump tattoos will make you wonder if there’s an anti-Trump tattoo artist running around intentionally giving out bad tattoos. On the plus side, however, their ink will definitely make you feel better about even the worst decisions you’ve made in your life. 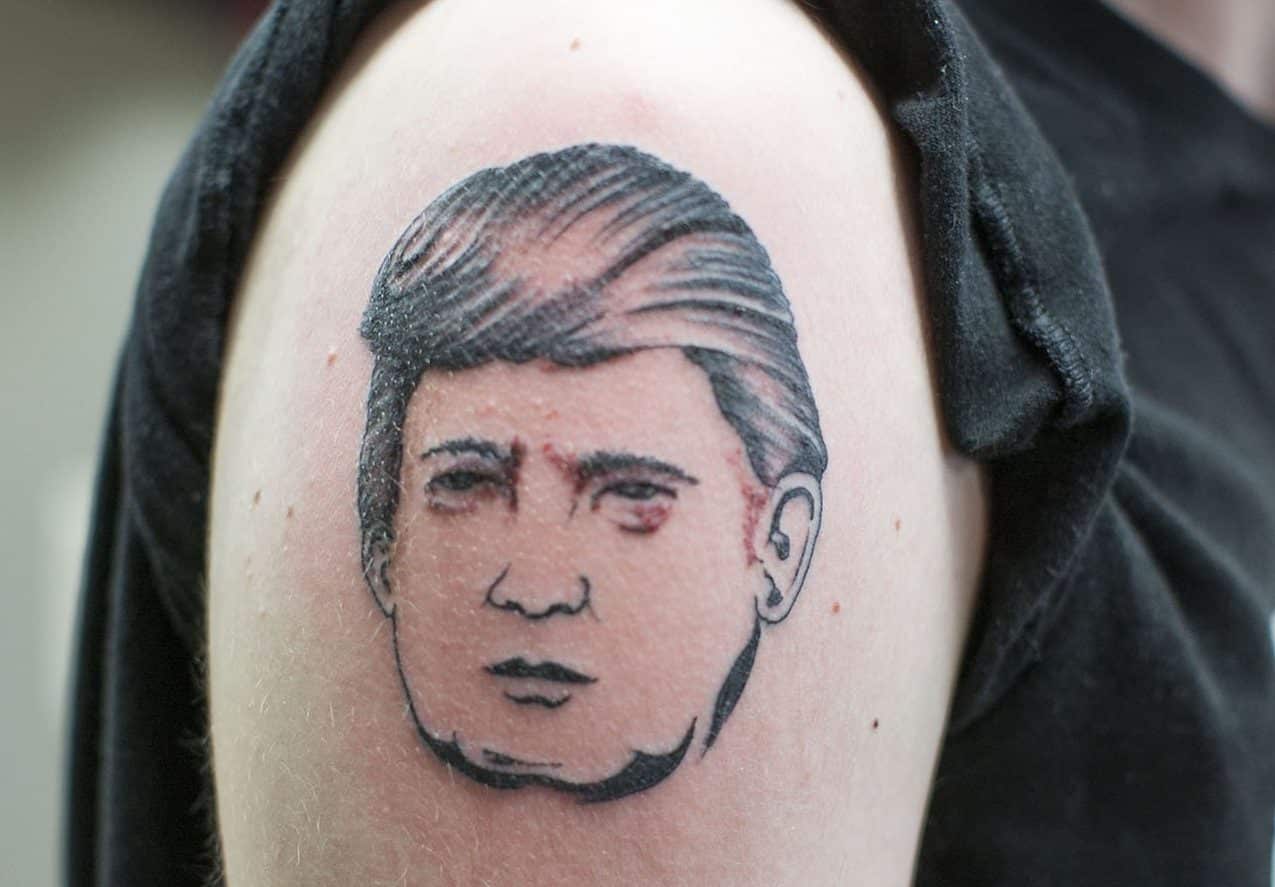 This guy showing off his ink at a Trump rally has others wondering whether that’s a lesbian biker on his arm or a depiction of Meryl Streep’s infamous imitation of the president. Aside from the fact that the tattoo is poorly done, there’s no way you can have an accurate depiction of Trump with that much hair. It throws off the entire piece and likely has people asking this poor guy who the woman on his arm is. It’s more believable that this is a memorial tattoo dedicated to this kid’s grandmother than a dedication to Trump. Imagine what this thing will look like 50 years from now. Yikes! What a concept! Dressing Trump up as Superman and having him rip open his shirt while the American flag blows gracefully in the wind in the background. If only this Trump supporter had gotten his ink done by a professional, then maybe he wouldn’t have ended up with an aged Ken doll on his leg. Those dreamy eyes and chiseled jaw don’t even replicate a young Trump let alone the lumpy, saggy skin the president has these days. And what’s with the flag? It’s not straight, it’s not blowing, it’s not a rectangle, and it appears to have just six stars. Hardly patriotic.

Trump Fandom At Its Worst 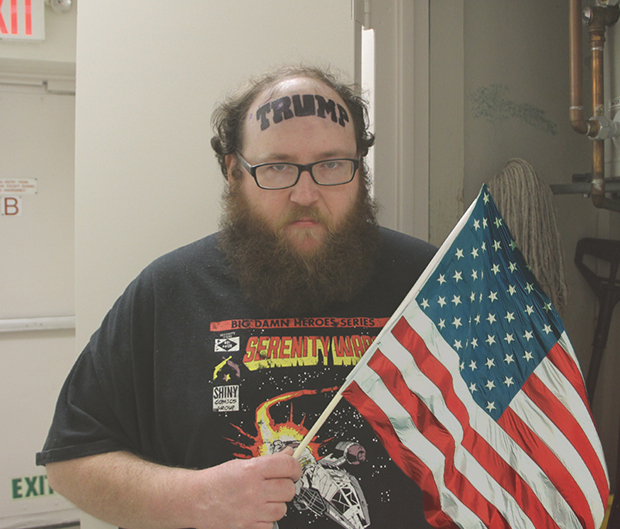 As a man that has inspired many hilarious memes, this guy’s forehead tattoo is unfortunately as real as Trump himself. While his new ink doesn’t take away from his gorgeous face, it certainly doesn’t help it much. Perhaps he’s expecting some of his hair to grow back so that the tattoo is eventually covered and far less obvious when he eventually has to go to work and continue being a respected member of society. Because he looks like he contributes a lot to the world, right? 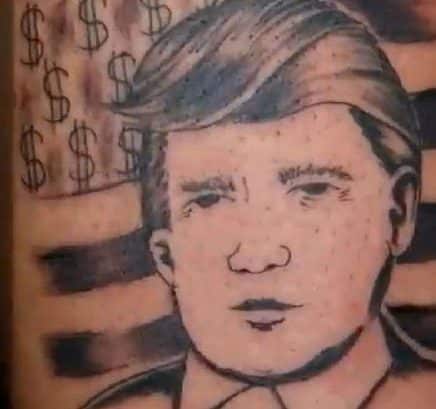 Is it just me, or does this Trump tat kind of look like Kim Jong-un? That flat wide nose and that rounded chin certainly don’t belong to Trump and actually makes him look like a little boy. The only indication that this is actually a Trump tattoo is the incredibly common hair illustration that’s found everywhere and the American flag being desecrated by a bunch of dollar bill signs in the background. While there’s a fine line between what’s legal and what’s not, Trump supporters are hardly new to disrespecting our country’s flag.

After looking at several images of this guy’s tattoo from multiple angles, there’s no doubt that Trump’s teeth are all sorts of messed up in this image. Given that this guy chose the goofiest Trump expression for his ink and the smile is pretty busted, he might not be a Trump supporter after all. Since the details of the tattoo look great, especially the hair and double chin, it’s hard to say if the owner of this arm is pro or against the president. Regardless, it’s still pretty hideous and even sort-of creepy.

This guy had to of lost a bet as there’s no human being in the world who would get this Trump tribal tramp stamp tattoo simply because they wanted it. Especially considering that this particular ink appears to be on the lower back of a grown man. Likely this awful tattoo was the result of one of the several tattoo artists around the country who offered free Trump tattoos during the height of his campaign. Not all of these artists were Trump supporters, however, which might explain the abundance of awful tattoos like this one. I predict a drastic increase in laser tattoo removal needs come the 2020 election.

Another victim of people giving out free Trump tattoos, this woman’s lower back tattoo seems to emphasize how loud and obnoxious the president is through use of bullhorns and dollar signs coming out of his mouth. Whether it’s for or against Trump is questionable. Perhaps this woman is a Trump supporter who enjoys the garbage that spills out of his pie hole and this tattoo is a commemoration to the man’s ability to lie to an entire country and still manage to get elected as president. If that’s the case, then great work! Otherwise, her tattoo artist might have taken advantage of her lack of artistic insight. 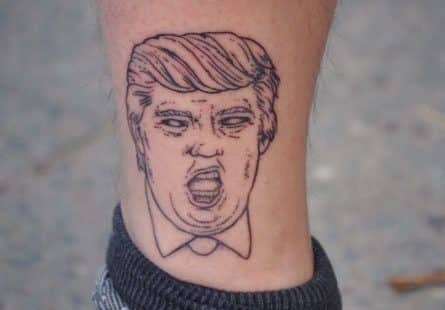 A demon depiction of Trump is obviously the first thought anyone looking into getting an ankle tattoo has, and this guy managed to pull it off. While the tattoo work on this piece isn’t actually that bad, the eyes clearly show an indication of demon possession. The artist may have tried to give Trump some serious side-eye here, but they went too far and the eyes look completely blank. His open mouth appears to be the result of demonic possession as the dark spirit is entering his body at the exact moment this image would have been captured, likely while he’s rattling off some nonsense about swearing he never slept with Stormy Daniels. At least when the next president is in office and Trump is hardly relevant this guy can just put on a higher pair of socks.

The moral of the story is to think before you ink and if someone offers you a free tattoo, maybe take a look at their previous work before you let them permanently scar your body.

So Just How Hard Would Joe Biden Punch Trump?