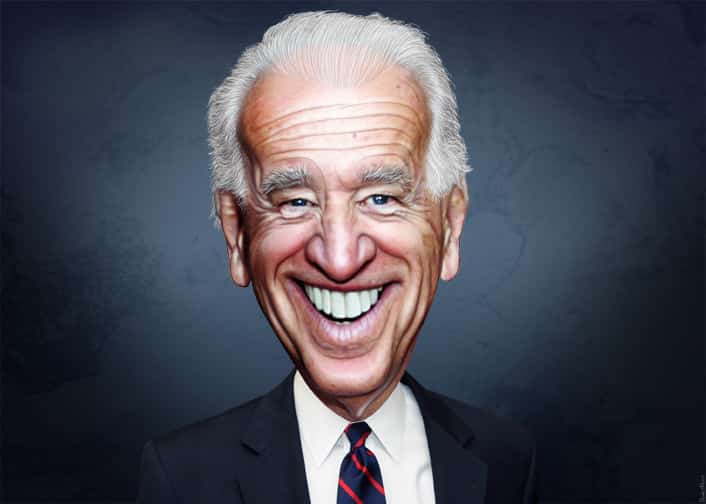 If you don’t keep up with every inane thing Trump says (love my job…), you might have missed Trump getting into a Twitter spat with former Vice President Joe Biden. You know, shirtless-Corvette-washing, meme-generating, America’s-fun-grandpa Joe Biden.

Like two high school jocks in a dick measuring contest in front of Suzy the Hot Cheerleader, these out-of-shape old men whipped it out and got into a multimedia tiff about which one would administer the best beat down.

It all started with Joe. Mr. Biden was speaking at a rally to combat sexual assault and was asked about President Trump. After referencing Trump’s “grab them by the pussy” comment and (fairly) accusing the president of contributing to an environment where sexual assault is normalized, Biden went on to say, “If we were in high school, I’d take him behind the gym and beat the hell out of him.”

Trump, perhaps predictably, reacted like a drunk hillbilly shouting at his ex-wife outside a battered double-wide trailer. To wit, the President of the Free Gosh-Darned World hopped on Twitter to shout about how his honor was impugned. This could not stand! His hands are huge!

Crazy Joe Biden is trying to act like a tough guy. Actually, he is weak, both mentally and physically, and yet he threatens me, for the second time, with physical assault. He doesn’t know me, but he would go down fast and hard, crying all the way. Don’t threaten people Joe!

Fair is fair: Biden was out of line here. I don’t want to make excuses for threatening people as a form of discourse. It’s too common in today’s fetid “marketplace of ideas,” and threats of violence have no place in meaningful conversations.

Was it classy for Joe Biden to say he would “beat the hell” out of the president? Definitely no. As much as we dislike Trump, the president is not a schoolboy you can take out to the woodshed. But I understand his feelings. Biden did say that he regretted making the statement, which is more walk-back than Trump’s bananas rhetoric ever gets.

But for the President of the United States to BRAG that he could beat up an old man on a public forum… man, these history textbooks are gonna be so weird.

Joe Biden Vs. Trump: Who Wins?

Let’s get to the real question: who would win? In a toe-to-toe matchup, there’s no way that hot jar of mayonnaise Donald Trump is coming out on top against a dude that actually knows how to wear sunglasses. Joe Biden, once-skilled athlete and well-liked-if-doddering codger of the American left, would absolutely stomp the opossums in a hairpiece that apparently run President Trump’s Twitter account.

Joe Biden: Being Vice President Is A B*tch

Presidential pardons are one and many in the history of the US. There are many times when US Presidents granted reprieves for their citizen’s misdeeds. The US President may grant a pardon for any individual, including himself, for any crimes done against the country and its citizens. This issue of Presidential pardons has been trending… END_OF_DOCUMENT_TOKEN_TO_BE_REPLACED

President Biden has tapped Rachel Levine to be his assistant secretary of health, making her the first publicly transgender federal official. In 2017, Democratic Gov. Tom Wolf appointed Levine to her current post, making her one of the few transgender persons serving in appointed or elected positions countrywide. Biden said in a statement: “Dr. Rachel… END_OF_DOCUMENT_TOKEN_TO_BE_REPLACED

The minimum wage hike has always been an issue in the US for the past decades. With only a few hours before Biden gets inaugurated as the President of the United States, people are excited for all his promises to take place. One of these is his plans to raise the minimum wage of workers… END_OF_DOCUMENT_TOKEN_TO_BE_REPLACED