Who would have thought that our country would have a First Lady with a former career in nude modeling who takes style tips from the Kardashians before having our first female president. Not to mention the fact that she’s a Slovenian immigrant married to a president who won his place in the office based on a promise to deport immigrants, but that’s a story for another day. Aside from being known for taking her clothes off in front of the camera, Melania Trump has a few other things in common with the Kardashians. Check out these photos which prove that either Melania steals Kardashian styles on a regular basis or she’s a huge fan of reality television.

1. When Melania Wore This White Dress 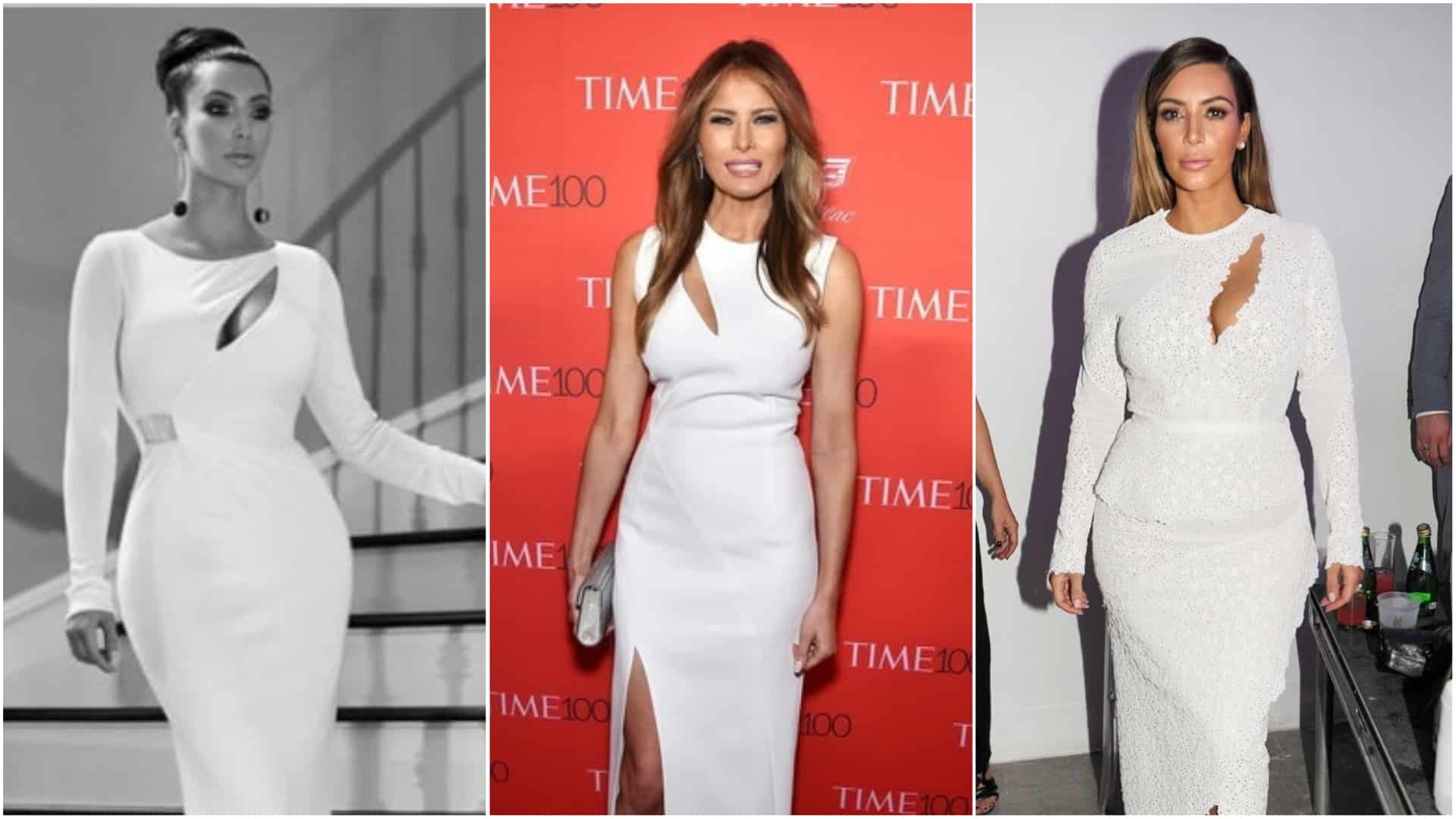 These high-neck white dresses with a chest cut-out were rocked by Kim K years before Melania tried it out. Kim’s first dress is a classic gown that she wore for her family Christmas card back in 2010. Her second dress is more textured with a peplum waist, which she wore in 2013 before she was to marry her current husband Kanye West. Melania’s white gown is an obvious replica copy of a style that was long come and gone when she wore it in 2016 to the Time 100 Gala. If we’re talking about who wore it better, it’s obvious that Kim’s original dress in 2010 takes the cake. 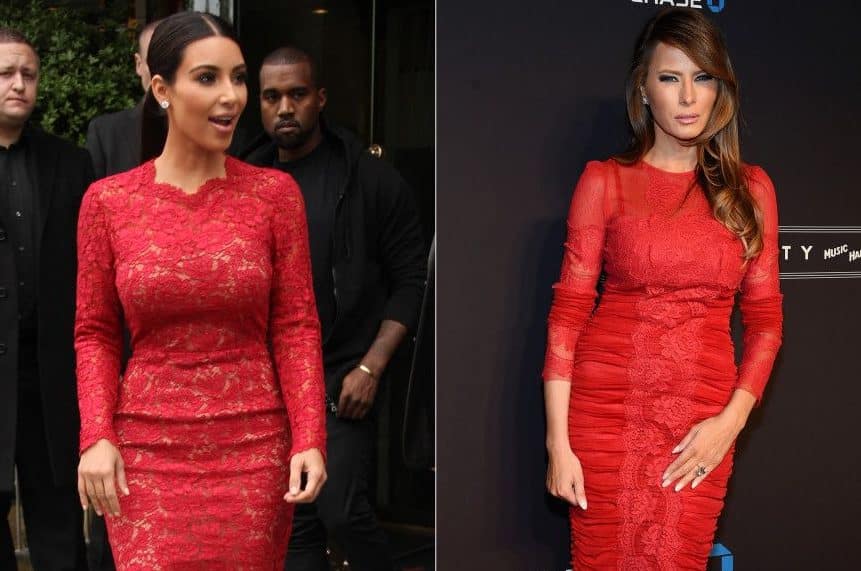 Kim K wore this sexy number back in 2012 at the peak of the lace bodycon trend and seemingly at the peak of her body period. Melania wore her dress several years later in 2015. It’s similar in style, however, the extra lace ruffles on the sides of the waist and skirt aren’t very flattering. This dress may not have come directly out of a Kardashian’s closet, but it does hold enough resemblance to make up wonder how long she’s been Keeping Up With The Kardashians.

3. When Melania Wore This Black Suit 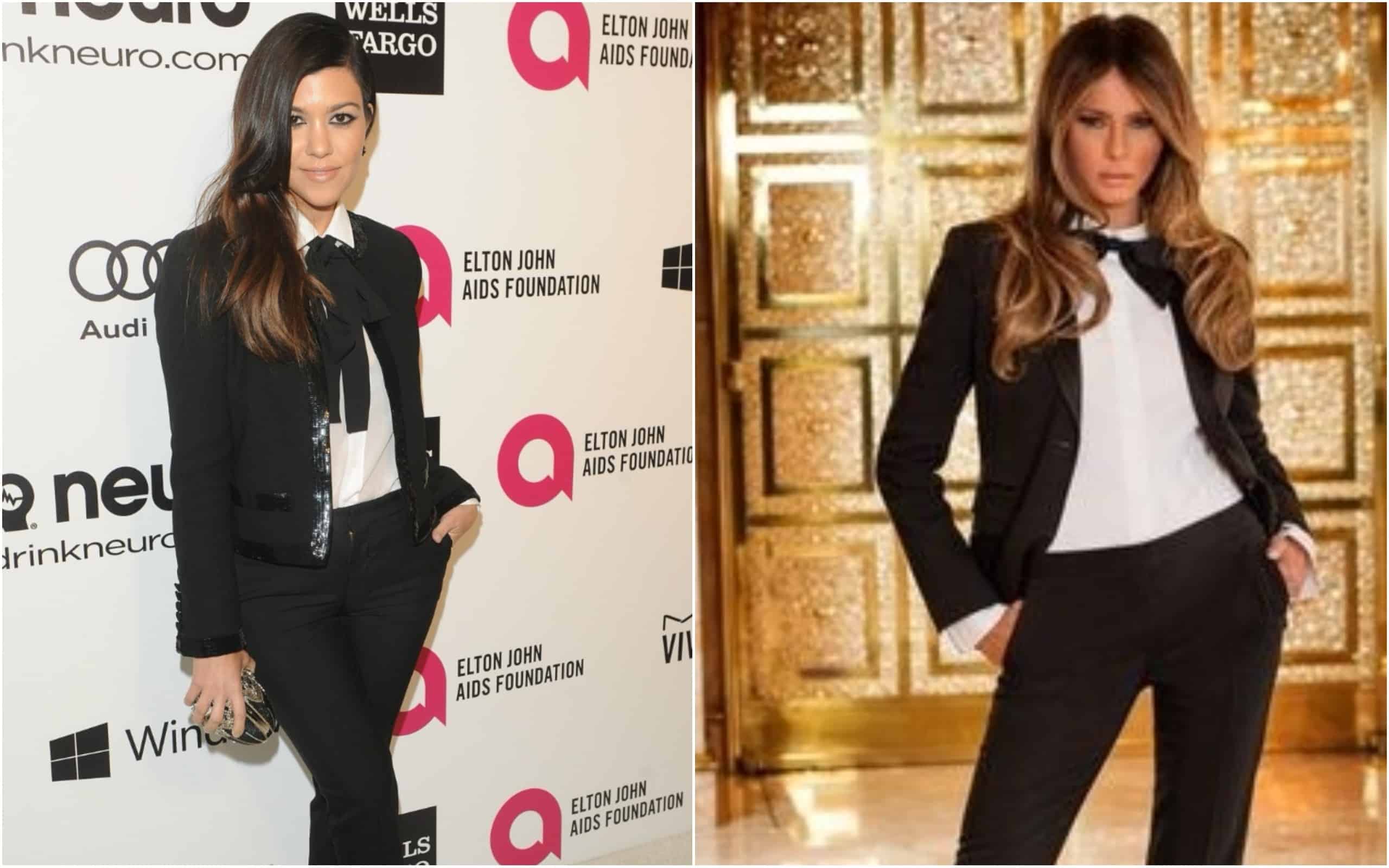 It’s not just Kim who Melania likes to steal her style from, but she has stolen some looks from Kourtney as well. So, Kourtney wore this suit to the Oscar Viewing party back in 2014 and perhaps Melania liked the look because she used it two years later in that infamous photo shoot the Trumps had in their home. You know the one, where the Trump’s basically show off how much money they have and how truly obsessed Trump is with the color gold. They both look incredibly sexy, but once again Melania was late to the game and wore it after a Kardashian.

4. When Melania Wore This Pointy Thing 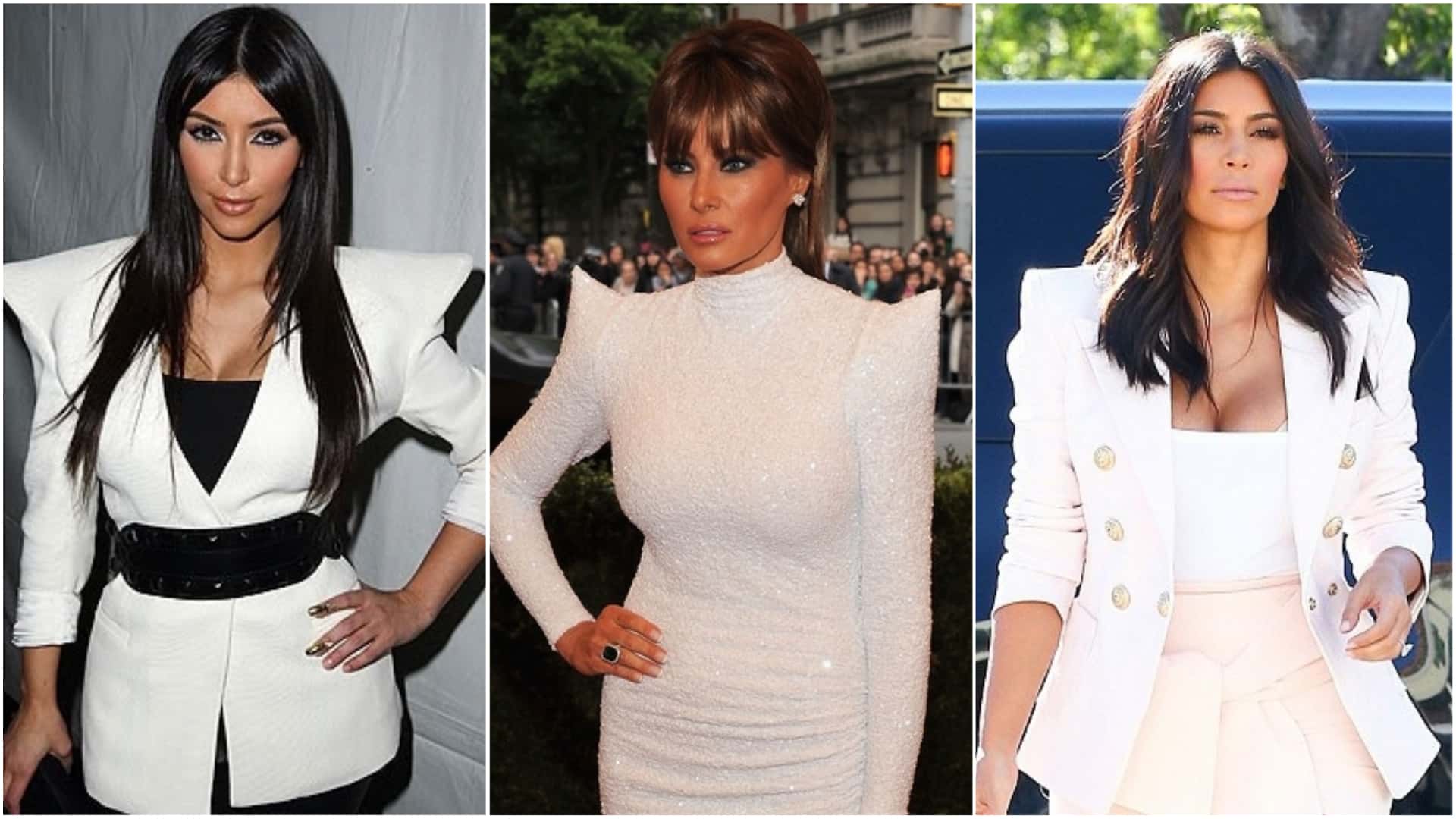 While it’s unfortunate that this look was ever in style to begin with, it came back along with other looks from the ’80s back when Kim K was still dating Reggie Bush. As a notorious style for overly-accessorized pop stars during an era when Lady Gaga dressed in meat on the red carpet and Nicki Minaj wore wigs taller than some people, it wasn’t uncommon to find pointy shoulder pads stuffed into the jackets and dresses hanging in clothing stores. Melania took on Kim’s ridiculous look later in 2012 while attending the Met Gala, but she’s certainly rocking that dress.

5. When Melania Wore This Burgundy Dress 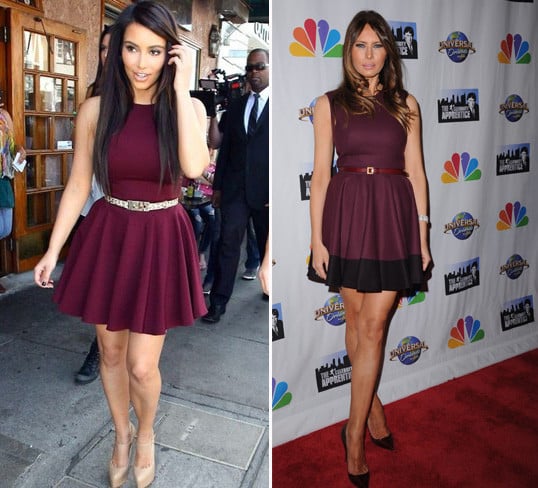 Is it just me, or does Melania continue to be a few years behind the trends? This adorable burgundy dress got a ton of attention when Kim wore it while she was out shopping with her sisters back in 2012. All you fashionistas out there probably remember when the short flare dress accompanied by a skinny belt was all the rage, and in some ways, it can be seen as a classic look for daytime. However, Melania wore something very similar later in 2015 on the red carpet for Trump’s Celebrity Apprentice finale event. Still adorable, but this has to be more than a coincidence.

6. When Melania Wore This Monstrosity 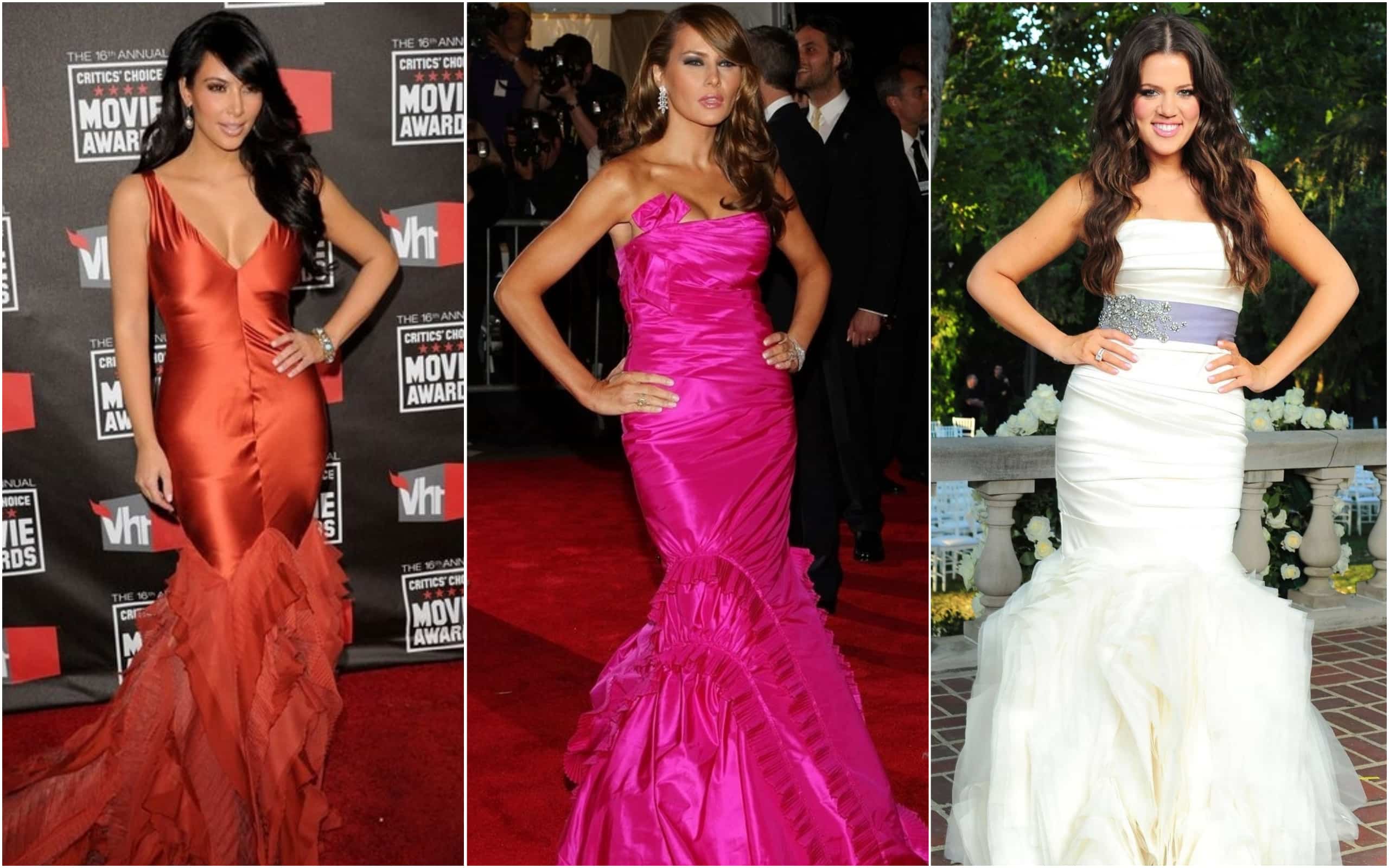 Mermaid gowns may have been the thing for a while, but you have to admit that Melania looks like it’s 1984 and she’s posing for her prom photos. Barbie pink just doesn’t work for everyone, and when it’s put in the shape of this kind of gown it’s just far too much for the eyes to handle. The Kardashians were all big fans of this style as it can be flattering on girls with more curves. Khloe even chose this style for her wedding, but Melania’s figure is swamped under all of those wrinkles and ruffles. In regards to who wore it better, let’s just hope all of these dresses have been retired since these photographs were taken.

7. When Melania Wore This Conservative Piece 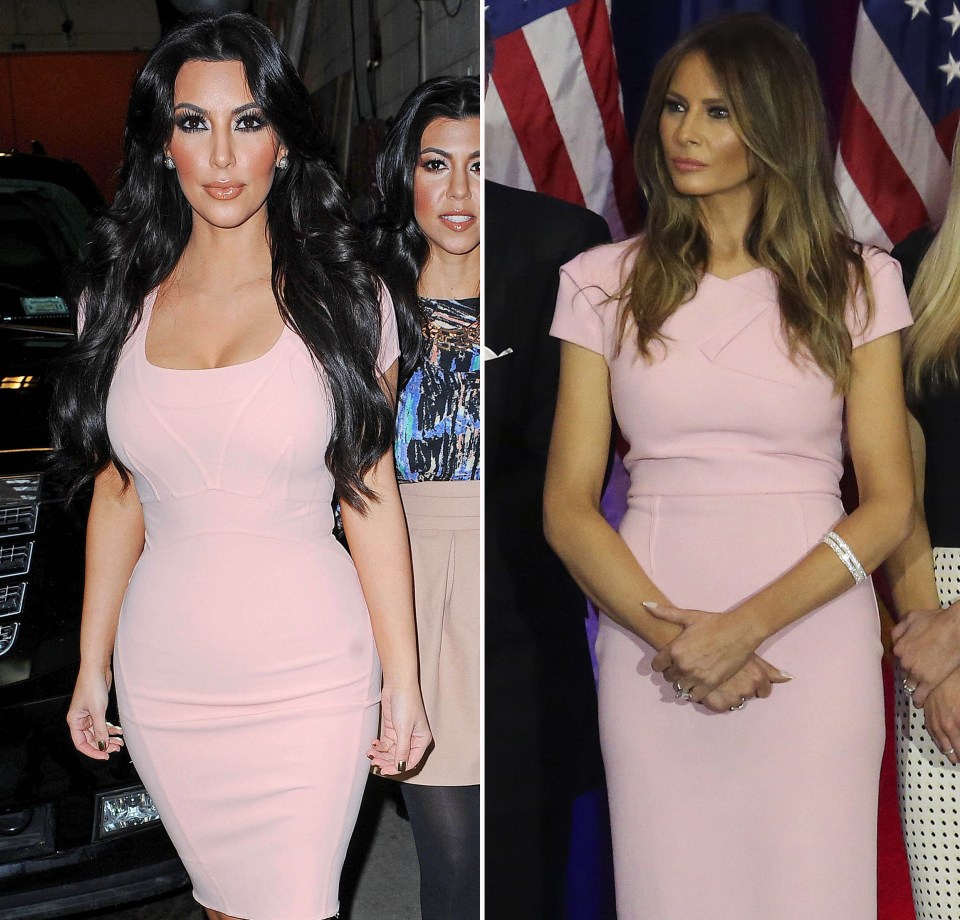 As the First Lady, Melania’s style has changed drastically. Her high-collared powder pink dress demonstrates her more conservative look these days, which she’s able to pull off flawlessly. Kim seems to be wearing the same exact dress, or something very close. Her neckline is lower and combined with a full face of makeup she gives her outfit a party dress appeal in contrast to Melania’s. It’s almost as if Melania has shopped at a Kardashian garage sale one too many times. 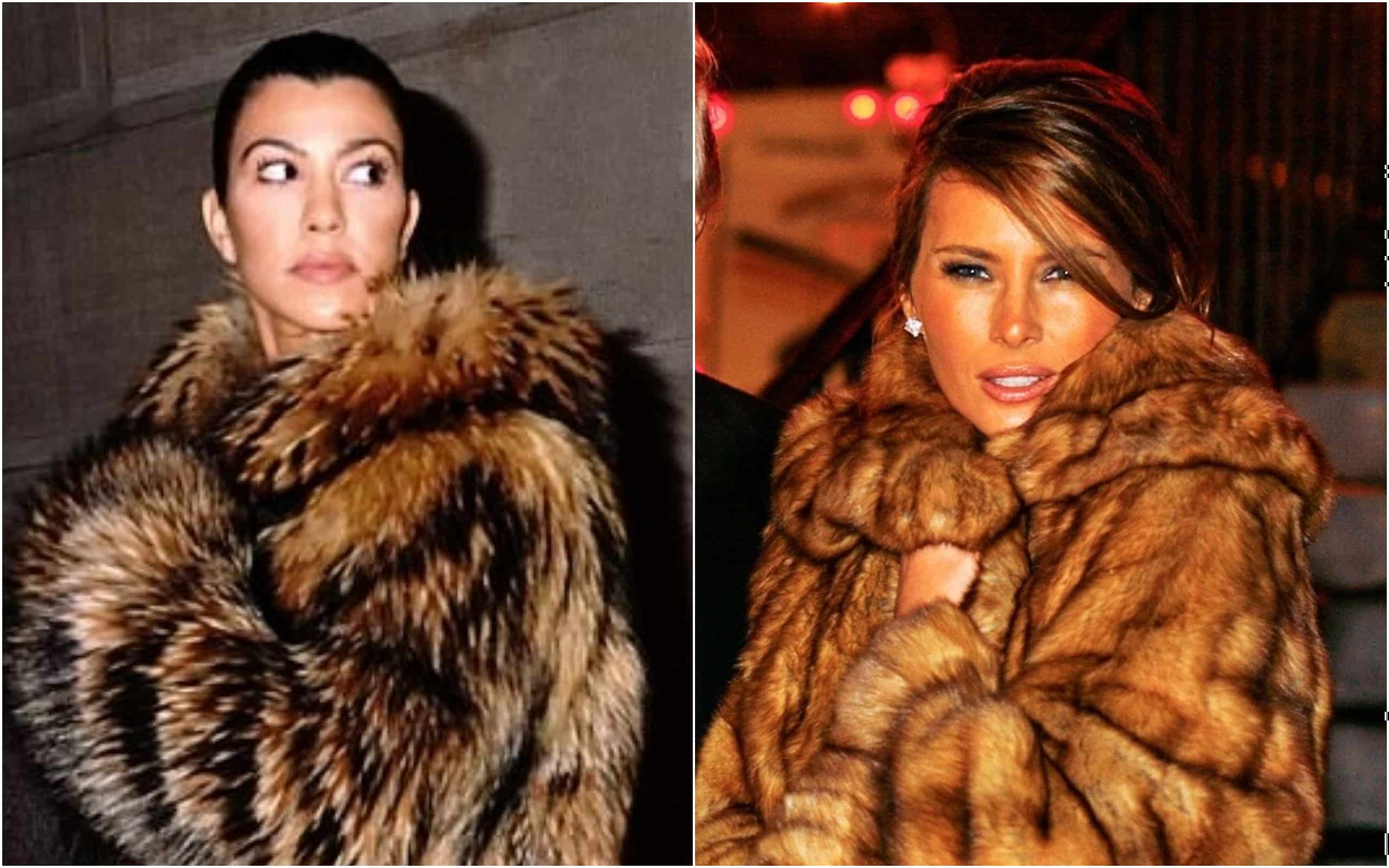 Both Melania and the Kardashians seem to have a thing for fur and wear it quite often. Even little North West has been rocking a collection of her own tiny fur coats practically since she first began walking. There’s something about wealthy people and their need to show off how much money they have by flaunting their ridiculous fur coats. Both Melania and the Kardashians own so many fur coats, it hard to say who stole this style from who!

There’s absolutely no way that it’s a coincidence that Melania’s style is so closely aligned with the Kardashian’s. Even if they shared the same stylist, they’re not doing Melania any favors by giving her all of the Kardashian’s old look-books. It’s more likely that Trump is too cheap to get his woman her own stylist and Melania is forced to Google what’s popular, and we all know when it comes to trends the Kardashians are always ahead of the game. On the bright side, now that she’s the First Lady, she’s being sent a ton of new clothes from the best designers so she’ll no longer have to look to reality TV stars for fashion tips!

Proof That Melania Truly Believes That Looks Can Kill