Popular Twitter Hacks That Will Surely Make You Laugh

It cannot be denied that hackers have become more intelligent. With their improved hacking skills, these cyber criminals are now capable of penetrating websites and social media accounts of large corporations and even celebrities.

A 2016 study conducted by the Pew Research Center to look into the cybersecurity habits and attitudes of adults found that majority (64%) of Americans have directly experienced some form of data theft or fraud. Many also claimed that they don’t have confidence in various institutions notably social media sites and the federal government to keep their personal data safe and are not following digital security best practices in their personal lives. It is for this reason that social media users and publishers should be more particular about privacy policies. Publishers including bloggers, for example, should ensure that their web hosting providers providers are capable of protecting their data at all times.

Among the well-known figures, Hollywood celebrities have also become victims of hacking. Some of them had a scary experience such as those whose personal photos were stolen and released on the internet while the others had a funny experience as hackers posted strange and annoying updates on their social media accounts.

On Twitter, here are funny and serious hacks that targeted some celebrities. 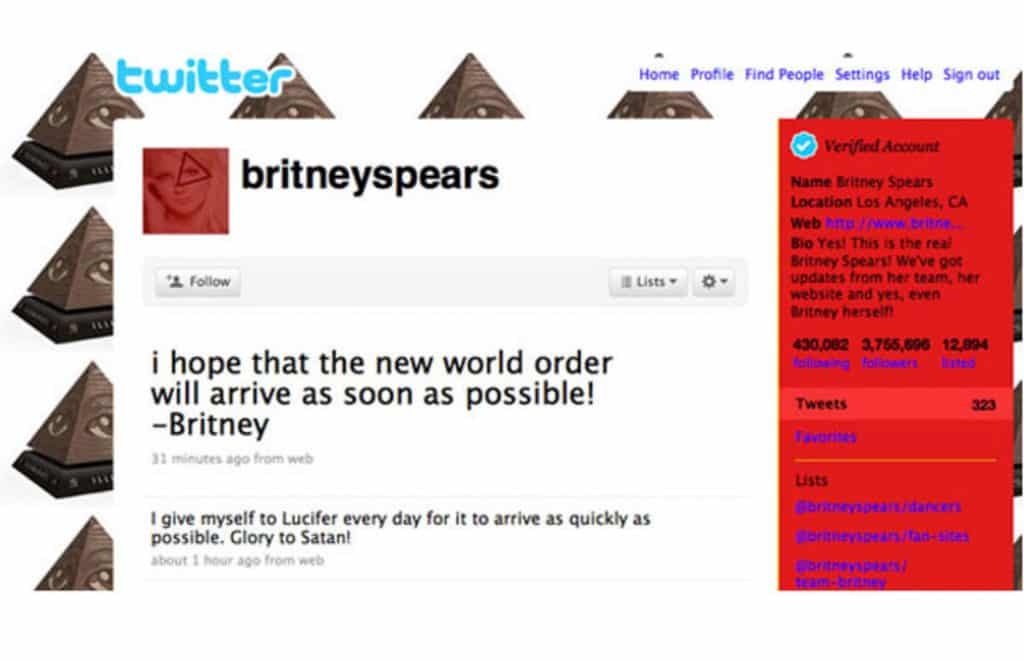 Back in January 2011, Britney Spears’ Twitter account was hacked not just once but twice. The first tweet said “I give myself to Lucifer every day for it to arrive as quickly as possible. Glory to Satan!” The second tweet posted a little over an hour after said “I hope that the new world order will arrive as soon as possible!”

The first hack was said to be part of a death hoax Twitter campaign that targeted celebrities while the second one that also edited her profile photo was aimed at spreading rumors that Britney Spears was a worshipper of Satan. 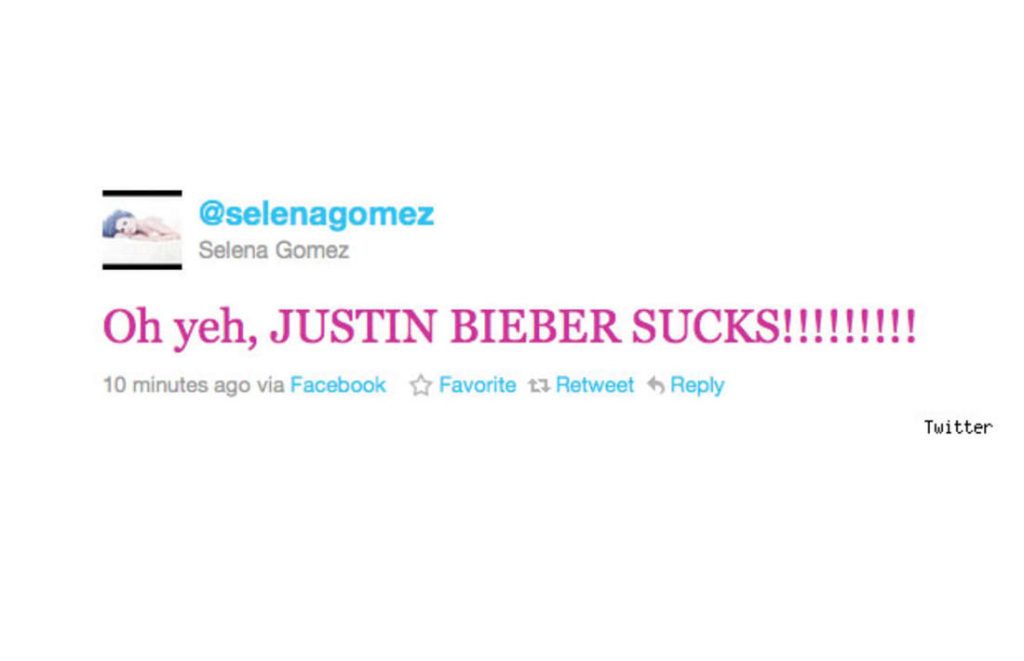 Selena Gomez also became a victim of hacking during the same month and year that Britney Spears’ Twitter account was hacked. This was after the singer and boyfriend Justin Bieber made their relationship official. Numerous Bieber fans made death threats to Selena and one of them named Pkinj0r-aka-Prokill broke into Selena’s Facebook and Twitter accounts. The hacker lashed back at the singer’s bashers and tweeted “Oh yeh, JUSTIN BIEBER SUCKS!!!!!!!!”.

It was later found out that the hacker was only seeking attention. This was after he uploaded a video on YouTube entitled “SELENA GOMEZ FACEBOOK GETS OWNED!” 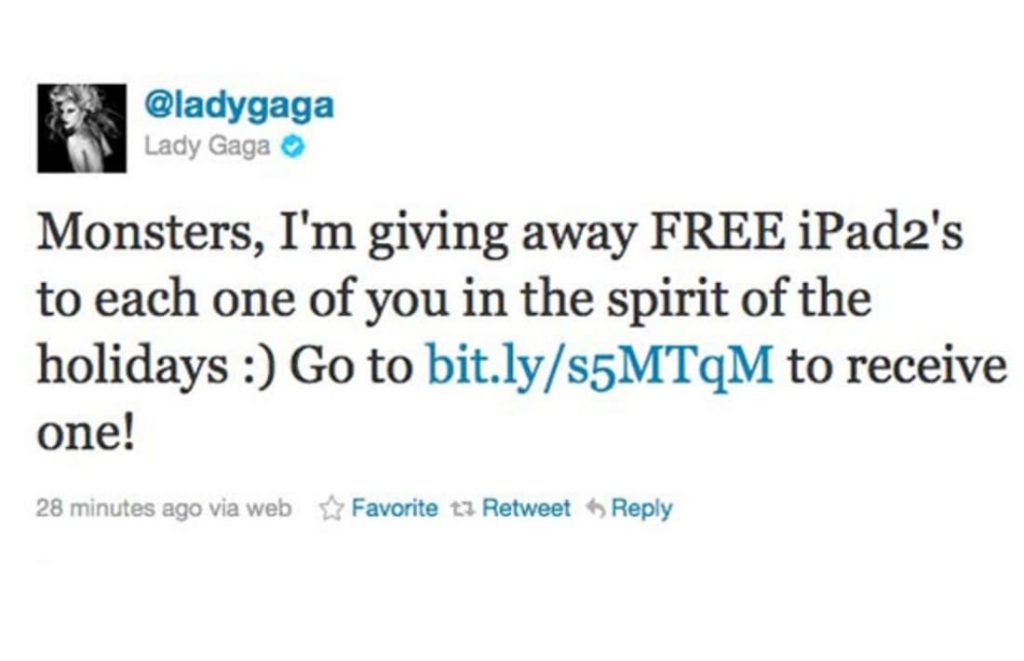 It was in December 2011 when Lady Gaga’s Twitter got hacked. The tweet that made her millions of fans happy and sad said “Monsters, I’m giving away FREE iPad 2’s to each one of you in the spirit of the holidays :)” A link was attached where people can avail of the iPad but the site was apparently spam. The singer’s Twitter account was hacked three times during that time with the third one promising free goodies with a bit.ly link attached.

Following that hacking incident, Lady Gaga tweeted “Phew! The hacking is over! And just in time, I’m on my way to Japan! So excited to spend Xmastime with my TokyoMonsters!” TechCrunch later reported that some 7,000 of Gaga’s fans clicked on the link and some of them even retweeted the offer. 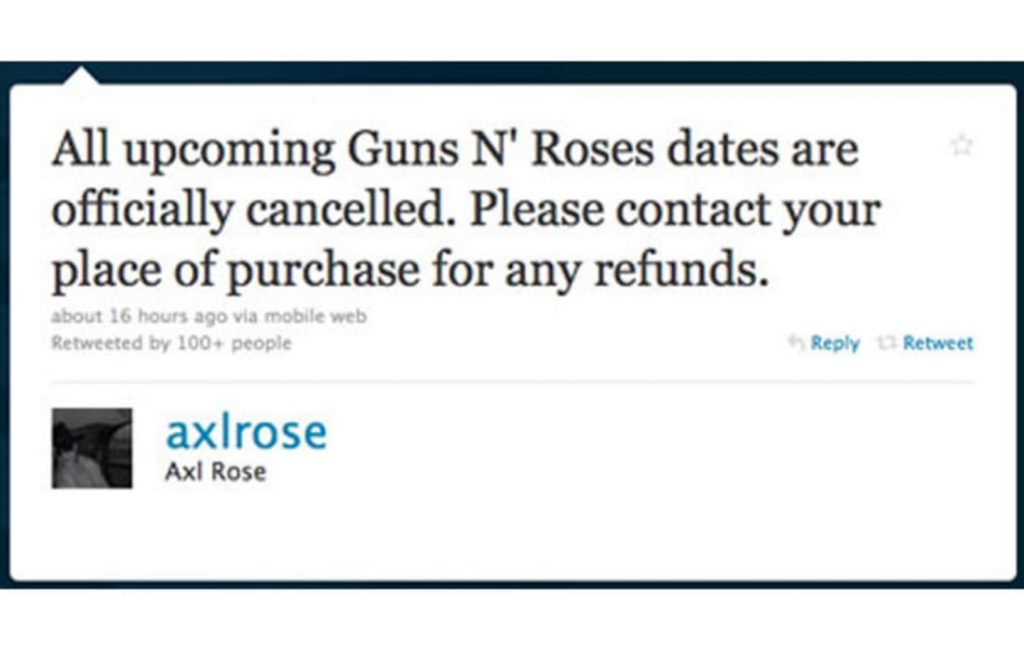 In 2010, the account of Guns N’ Roses lead singer was hacked by a prankster who tweeted that the band’s European tour was canceled. The tweet stated “All upcoming Guns N’ Roses dates are officially canceled. Please contact your place of purchase for any refunds.” The hacking occurred after the band performed late than their scheduled time at the Rock’N’Rev. You could just imagine the panic it caused the U.K. promoters who immediately clarified the truth to ticket buyers. The European tour at that time was in line with the release of the band’s Chinese Democracy album after almost a decade.