Trump’s Unnatural Orange Hue Is Killing The Tanning Trend And...

Remember when it was all about gym, tan, laundry? Well, it appears that most people will be skipping the tanning portion of their weekends from now on and it’s all Trump’s doing. His Cheeto-orange exterior has scared so many people away from the once popular trend that we’ll likely see a huge dip in skin cancer diagnosis over the next few years. Well, overseas at least.

A poll was recently done in Britain on tanning bed use and the results are hilarious. It showed that 73 percent of those who previously used tanning beds (or considered it) said they would never do it again, and all for the same reason. Apparently, the Brits aren’t huge fans of the American president and will go to great lengths to avoid the slim chance of having even the slightest resemblance to him, a man which they described as having “panda eyes” and an “orange hue.” It’s only a matter of time before tanning salons start shutting down all over the UK and it spreads to Europe, and let’s face it, those guys don’t get much natural sun over there no matter what time of the year it is.

So, tanning salons might not actually be shutting down, but it’s a definite possibility. Before we can determine whether their fears are legitimate or completely irrational, we need to examine Trump’s tan and figure out how he manages to get such a unique coloring. Anyone with a working set of peepers can tell that Trump’s skin is far from the natural hue of anyone on this planet, but it might take a trained eye to notice the signs that prove he uses a tanning bed. Several tanning salon pros have been interviewed over the years in regards to this very topic, and every one of them seems to agree on the fact that the president’s tan is a result of one too many fake-and-bake sessions. The white skin circling his eyes is caused by tanning goggles, used to protect the eyes. With the slightly orange hue he likes to maintain, however, it’s possible that he receives a spray tan as well.

Anyone who doesn’t tan at a salon likely wouldn’t catch on to this, but it was pointed out by some of these tanning salon experts that the goggles he wears while tanning is likely a bit over-sized. Otherwise, he wouldn’t have such obvious white circles around his eyes. These days tanning salons provide you with adjustable eye protection that basically looks like a lame sticker, but it gets the job done and eliminates that pesky white skin. It begs to question, if he’s using older goggles for his eyes, what kind of dinosaur tanning bed is he using? Likely one that was made in 2006 around the same time when he was whoring around town while his latest wife was home with their newborn. 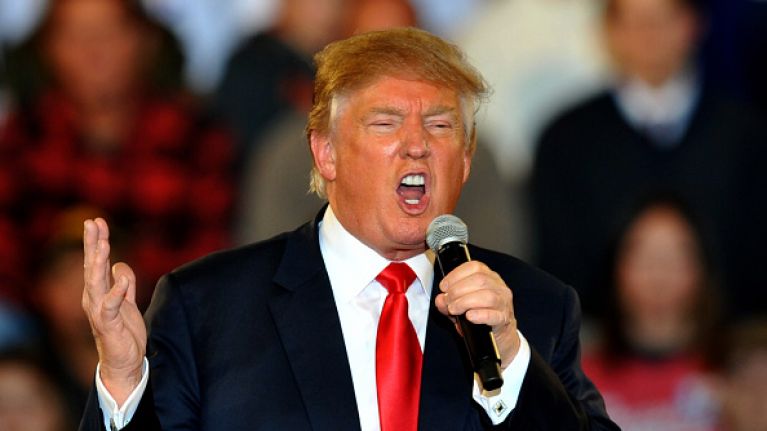 Since Trump’s tan makes him look like he’s trying out to be the newest member of the Jersey Shore cast, there’s like a 2 percent chance that he doesn’t own at least one tanning bed. It might be older than his last the woman he hired for sex, but it gets the job done. Or so he thinks. This is the only sort-of acceptable reason for his appearance, as you can’t expect a tanning bed that old to provide great results. Owning one in each of his homes is really the fiscally responsible thing to do because we all know he won’t be having a professional back to the White House to spray his naked belly again.

To Wrap It Up

In conclusion, there’s absolutely no way that Trump isn’t guilty of spending far too much time laying on his back in a tanning bed. And while it’s ridiculous for this to be a reason to avoid tanning salons, it’s also not such a bad thing for people to stop doing.

Ever wonder what Trump would look like without his infamous tan? Then you need to check out this video.

WARNING: Once viewed, you cannot unsee this image.

Even Lawyers No Longer Want To Work With Donald Trump

Even Lawyers No Longer Want to Work With Donald Trump