The 5 Types of Trump Supporters

Those of us who see the truth about Donald Trump, who see past his bluster and boasting and lying, have a hard time understanding his supporters. How can they be so blind? So trusting? So foolish? I mean, seriously, how dumb do you have to be to buy into this man’s baloney?

Well, there are a bunch of morons out there, but there are other kinds of Trump supporters, too. They’re not all idiots, either. The majority of them know exactly what they’re doing (even though some are in denial). Maybe they don’t really want to support him but see no alternative. Maybe they’ve been innocently seduced by his cult of personality. Or maybe they’re just uneducated, backwards, and don’t know any better.

For your reference, and to help facilitate understanding across the gaping chasm that is the American political divide, I hereby present to you an explanation of the five kinds of Trump Supporters. It’s not going to help you build bridges with them in any way — let’s be real: they’re all far too stubborn to admit being wrong about this man — but at least it will satisfy your incredulous, flabbergasted need to understand.

Reluctants claim not to be fans of Donald Trump. They say they don’t like his personality or his behavior. They’ll tell you they voted for him because he was “the lesser of two evils.” That’s because nothing made them dry heave more than the thought of voting for Hillary Clinton — who they love referring to as a criminal because of Benghazi, Whitewater, and as a certain someone famously put it, her “damn emails.”

As much as they love to talk about Hillary’s alleged illegal moves, Reluctants can’t be bothered to care about any of Trump’s criminal activities. These pure, innocent souls who are in no way complicit to Trump’s insanity had no choice but to vote Make America Orange Again. It was all by default! So you can blame “default” when Americans lose health insurance, the environment turns to garbage, and the rest of the world treats us like its drooling, idiot cousin.

The majority of these claims are from people trying to save face, a way of attempting to fall on the right side of history. They’re only too happy to cheer him on when he does something they like. But when he exhibits one of his despicable traits, says something unthinkable, or blatantly lies over and over — all of which is just another ho-hum day for the President — Reluctants have a way of not noticing. They’ll post some of the things he does that they see as positive on social media, but they won’t say a word about the rest.

They’re not blind to the disgusting stuff — it’s the whole reason they’re reluctant. But rather than gripe about the behavior, personality, and actions of one of the most disgusting men on earth, they’ll go back to something much more safe and comfortable: griping about the “failed” Presidency of Trump’s predecessor.

Like the Reluctants, Watchdogs have no great love for Donald Trump. On a personal level, they don’t approve of his personality, his attitude, or his bullying behavior. So why did they screw over the country by using their solemn vote for President to elect a damage sociopath? They did it because they like his policies. As genuine conservatives, they fear big government and outside influence above all else.

On the whole, they’re Americans who don’t feel safe, who have the same xenophobic fear of The Other as Mr. Trump himself (largely due to 9/11 and other terrorist attacks), want to keep their precious guns at all costs, believe the gay lifestyle is sinful, and refuse anything related to silly notions like the government using its power and resources to help the poor and disabled. (As Trump’s tax cut shows, the government is only supposed to use its power to help the wealthy and entitled. Duh.) They believe benevolence is best left in the hands of private citizens.

Despite Watchdogs’ distaste for him personally, they’ll cheer Mr. Trump on when he signs a bill they approve of or an executive order that gives them the warm fuzzies. As long as he keeps his policy promises, they’ll keep supporting him no matter what utterly bonkers, dangerous, or illegal thing he says or does next.

Swamp-Drainers know exactly who and what they voted for. They just don’t care. Trump’s emotional instability, pathological lying, or unpresidential demeanor doesn’t concern them. Why is that?

Because they’re severely disillusioned with partisan politics. You know how after a new bill is introduced in the House or the Senate, the votes on it are super predictable? If it’s a bill introduced by a Democrat, most of the Democratic Congresspersons are going to vote “yes” on it, while the Republicans will fight their butts off to keep it from passing. The opposite is true for Republican-backed bills. Doesn’t matter what the bill is about or who it will benefit. It’s all a silly game of us vs. them.

When Obama was in office, Republicans tripped over themselves doing anything and everything they could to undermine his initiatives — not because they were necessarily bad, but because they came from him, a Democratic leader. Democrats are trying to do the same thing with Trump right now. Everyone knows that most politicians will do whatever they have to do to stay in office or play the Game of Aisles (right side vs. left side) — the wants and needs of their constituents can go screw themselves.

The outrage is real, and be honest: we all feel it. For politicians, party loyalty comes first, and national loyalty comes a distant second. Swamp-Drainers are tired of these leaders who play the same old game, and want someone from outside the system to come in and clean house. Swamp-Drainers are a big part of the reason that we have the first President in history with no prior governing experience.

You can’t blame them for wanting partisan politics to stop. It’s a frustrating, counter-productive, and unfair waste of our nation’s time and resources. But believing Donald Trump to be the outsider to solve all of our governmental problems makes as much sense as selecting Harvey Weinstein as the next Pope.

These are the die-hards. The true believers, the ones that will blindly follow Trump anywhere. Don’t bother trying to get through to them. It’s an exercise in madness.

The Cultists are giddily drinking the Kool-Aid. They believe every word Trump says — no matter how outrageous, stupid, or blatantly false. They refuse to acknowledge his moral deficiencies, instead pinning all blame on how the media portrays him. They spout meaningless, tired rhetoric as their reasons for supporting him and hating his opponents. They’re Trump groupies who are rarely seen without a Make America Great Again hat proudly adorning their heads. 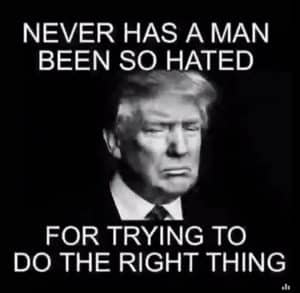 Yes, that’s a thing. Let’s have a moment of silence for the truth, for it is dead and forgotten.

On the campaign trail, Donald Trump once boasted that he could shoot someone in the middle of 5th Avenue and not lose a single voter. While not true, it’s safe to assume murder wouldn’t cause him to lose any Cultists. As an exasperated Anderson Cooper once told a hardcore Trump supporter, “If he took a dump on his desk, you’d defend him.”

Cultists not unintelligent people. They just inexplicably, earnestly believe in Donald Trump. To them, his word is gospel truth, he can do no wrong, he’s the second coming, and anyone that says otherwise is “fake news,” aka the biased liberal media, aka minions of Satan.

To these people, no one will EVER be justified or accurate in criticizing the President, and you will NEVER convince them that he’s not the man they believe him to be.

I hate to use such an unsophisticated term, but there’s no better way of putting it. Pigs are the racists, the sexists, the greedy 1%, and all other forms of humanity’s scum. They’re the bigoted rednecks who display the Confederate flag in the back window of their pickup trucks. They’re the filthy rich sexual harassers who stand accused by the #MeToo movement. They don’t care what anyone else thinks, and they don’t care who they offend. In fact, offending people probably delights them.

The Pigs are summed up by the violence in Charlottesville, Virginia, where neo-Nazi white supremacists marched in the city and clashed with counter-protestors. Despite the fault being with the white supremacists — whether they started the violence or not, they incited the whole thing by, you know, EXISTING — President Trump refused to condemn them until days later when he placed blame “on both sides.” (That was probably one of the happiest days of David Duke’s life.) 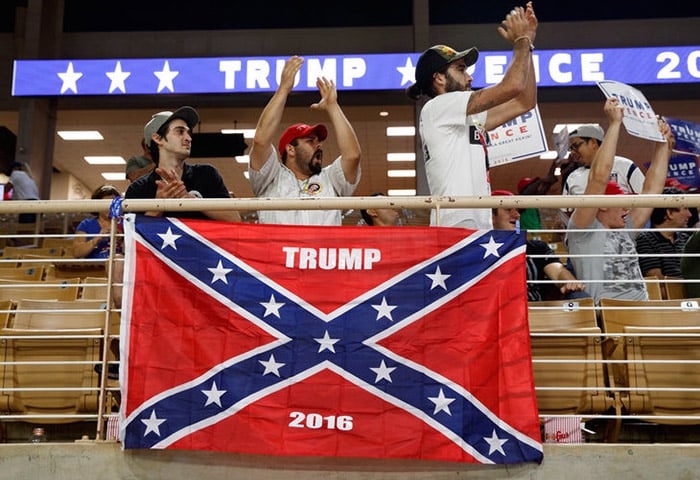 Trump won’t do anything to alienate these voters because they have numbers, and he needs them. And they adore him because he fights for gun rights and doesn’t like foreigners, aka people from those pesky “shithole countries.” As protestors are wont to write on big signs outside of Trump tower, not all Trump supporters are racists — but all racists are Trump supporters.

It isn’t fair to categorize all Trump supporters as Pigs or Cultists. Some of them would gladly rather have someone better to support instead.

Here’s the thing. The Reluctants, Watchdogs, and Swamp-Drainers are in denial. They refuse to believe the truth that supporting Donald Trump, even reluctantly, is telling his contingent of backwards, redneck, racist, sexist, gun-obsessed supporters that it’s entirely okay for them to be as evil as they want.

This Can’t Be Real: There is Now a Trump Dating Site