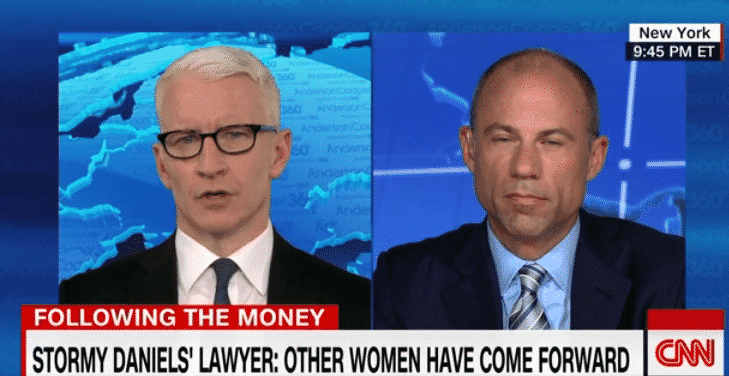 The recent Stormy Daniels allegations against Donald Trump have opened a floodgate (get it, storms makes floods? It is quite witty, really) for other woman-folk to step forward, claiming they TOO were Donald Trumped. What this means for those of you who don’t know is, being Trumped is code for:

I had sex with the current president and he made me fill out a form to not tell anyone after.

So if the use of the word Trumped confuses you still, that’s on me. Anyway, Stormy Daniels’ lawyer was on CNN with Anderson Cooper when he broke the revelation that there are, indeed, more (alleged) mistresses waiting in the wings to call Trump out on his sexual misconduct.

“As of tonight, we’ve been approached by six separate women with similar stories to my client,” said Michael Avenatti, Daniels’ lawyer, in an interview on CNN’s “Anderson Cooper 360.” “I want to stress that we have not vetted these stories to a great degree, however the initial consultation, the initial information that we’re receiving indicate that there are some striking similarities between their stories and that of my client, Miss Clifford.”

But honestly, is anyone on EARTH at all surprised by this? This is a man who boasted about grabbing women he did not even KNOW by the cat. What kind of weirdo grabs people’s cats?

Oh, wait, those weren’t cats, that was slang! Ewwww, that is SO much worse than what I was thinking this whole time.

Will Smith disclosed in a podcast interview recently that he would “consider” running for president “at some point.” In an interview released Monday, the 52-year-old rapper told Crooked Media’s “Pod Save America”: “I think for now I’ll let that office get cleaned up a little bit. And then I’ll consider that at some point down… END_OF_DOCUMENT_TOKEN_TO_BE_REPLACED

Vaccination programs are currently on roll-out and countries that vaccinated for COVID-19 are talking. Questions are everywhere, and it is building up people’s anxieties about vaccination. How has the vaccine affected their population? Are the vaccines any good? Should we research more on newer vaccines? Can the vaccines kill the mutated virus? The answers change… END_OF_DOCUMENT_TOKEN_TO_BE_REPLACED

Texas Senator, Ted Cruz, received heavy criticism after taking a vacation to Cancun with his family in the middle of a crisis. The latest power crisis in Texas left hundreds of homes without electricity and water for more than 48 hours in negative degree weather. This has left the lives of many Texas residents in… END_OF_DOCUMENT_TOKEN_TO_BE_REPLACED