We’ve all read reports indicating that Trump’s first year in office was far from successful, but his second year hasn’t exactly been going well either. If you are one of the few Americans still hanging on to hope that he’ll figure out how to do his job sooner rather than later, these fails will likely burst your bubble. POTUS clearly hasn’t learned squat during his first year in the White House and has somehow managed to become even more careless with his actions. While we might be just a few months into 2018, Trump has already shown signs that indicate we shouldn’t expect much improvement. Here are some of Trump’s worst fails so far this year.

Trump Used Notecards To Remind Him To Care 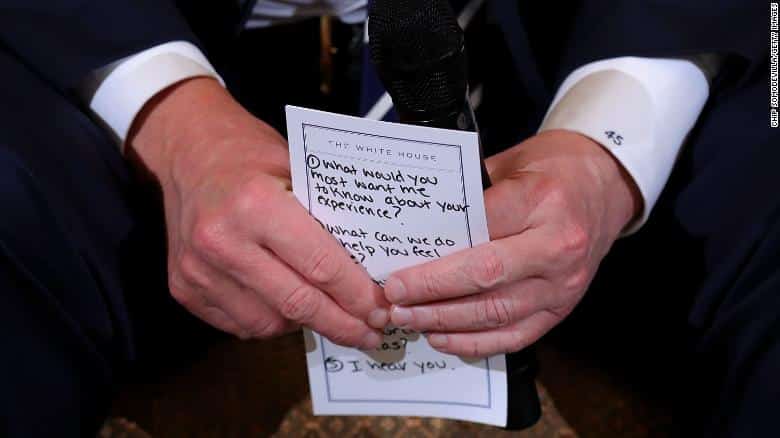 After the Parkland shooting, victims of mass shootings from all over the country shared their experiences and spoke out about the need for gun control at an event Trump attended. It seems our president needed a bit of a reminder on how to be an empathetic human being, and the evidence was captured by a photographer. Written on White House stationery, Trump needed to be reminded to ask, “What would you most want me to know about your experience?” and “What can we do to help you feel safe?” They’re generic questions, but hardly something worth causing an uproar. The true fail here is the fifth and last item on the list where the president needs to be reminded to acknowledge he’s actually listening to these kids as they recall what was likely the worst day of their lives. “I hear you,” it reads proving we live in a world where our president needs to be briefed by the White House to care.

Trump Wants To Arm Our Teachers

In response to yet another school shooting in our country, those with common sense have been demanding stricter gun laws. Those with less common sense are actually suggesting arming our teachers. Unfortunately, our president is on the lesser end of the common sense spectrum. To make things clear, Trump wants these armed teachers to be trained which makes it all okay. Nothing like making public schools even more like prisons to increase graduation rates! To top it all off, POTUS backs up his brilliant idea by saying he thinks active shooter drills are too negative and scary for kids. So let’s just arm their teachers! Having a gun in your face all day isn’t scary at all!

In early January, Trump attended the college football national championship in Atlanta where he was caught on camera attempting to mouth the words of “The Star-Spangled Banner.” POTUS lazily mumbles along with country singer Zac Brown as he belts out the national anthem, missing more words than not. Shouldn’t that be a requirement of the president? Knowing our country’s national anthem? What makes this fail even worse is that Trump insists on giving crap to football players who protest during this moment of the game by kneeling, but at least they can likely recite the words to the national anthem.

Trump’s sheer narcissism has led him to make some outlandish claims throughout his presidency,  and most recently he decided his approval rating was at around 50 percent. He bragged about it being higher than Obama’s because everything needs to be a competition for this guy. When reports surfaced that this was far from the truth and that Trump’s approval ratings were actually between 38 and 44 percent, he actually had the nerve to call it fake news. While Trump is clearly rounding up for his own benefit, he doesn’t seem to understand that a rating of “around 50%” and an actual average rating closer to 40 percent are quite far apart.

Trump Got Caught With His Pants Down

When Michael Wolff’s book Fire and Fury was released, people not only got an inside look at what was going on in the White House, but they also got a better idea of what the people running our country truly think of the president. It seems that not only did Trump not think he would actually win the presidential campaign, but he had no interest in getting himself more familiar with our country’s political history and other essential information. The book quotes Sam Nunberg who was one of Trump’s advisors during his campaign. He said, “I got as far as the Fourth Amendment before his finger is pulling down on his lip and his eyes are rolling back in his head.” The book also claims that Trump went into details about what’s entailed in a golden shower when reports surfaced that Russia had some dirt of the president and that he eats McDonald’s regularly because he’s afraid of being poisoned and thinks there isn’t enough time to mess with his food since preparation is so quick. As a former McDonald’s employee, I can guarantee his food has been spit in and toyed with on more than one occasion.

Trump Brags About His Big Button

We all know that Kim Jong Un has a few screws loose, but rather than ignore his idiotic claims Trump just can’t seem to let the little things go. So, when Jong Un made threats talking about his nuclear button on his desk, our president felt the need to one-up him, claiming his nuclear button is bigger and more powerful. And like most teenage rants, this one also took place on Twitter, letting the world know that their lives are literally in the hands of a moron. His tweet read, “North Korean Leader Kim Jong Un just stated that the ‘Nuclear Button is on his desk at all times.’ Will someone from his depleted and food starved regime please inform him that I too have a Nuclear Button, but it is a much bigger & more powerful one than his, and my Button works!” Fortunately, Trump’s big shiny button likely does nothing more than open and close his garage doors.