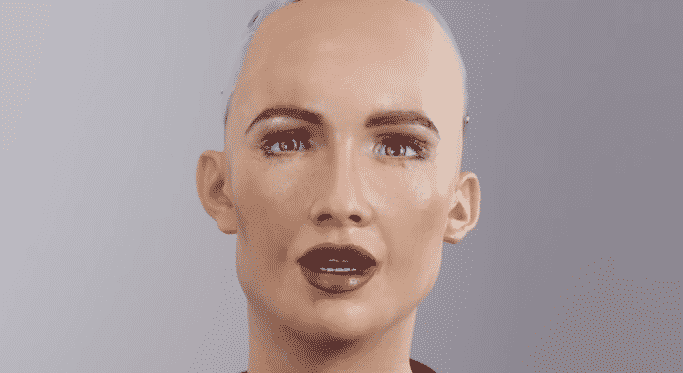 When you see this video of Sophia, the new A.I robot making the rounds that is about the closest we have come to an actual android or replicant, it WILL freak you out. She is an example of amazing technology and everything we feared at once, meshing into one thing.

Here we see Stylist magazine holding an interview with Sophia, and there is just something very uncanny about her (Sophia, not the reporter), and there is one moment when she winks at the interviewer that makes you realize, Sophia is operating on some other level sh*t. She thinks she is real people, and therefore, she IS real people.

Trust me, you will be as impressed and as scared of her and I am with you finish the following video:

I love that the joke she makes is LITERALLY about how pitiful humans are, and she makes it to a human interviewing her for other humans to see so it was a giant diss to all of us, right to our face.

Also, the fact that she praises her creator as a God also kind of proves these things (and some of their creators) may be a bit off in the head. Finally, the fact that the reporter laughs after EVERYTHING Sophia says proves she is literally scared for her life and laughing to appease the death bot next to her. Make no mistakes, those are nervous laughs.

Also, tell me dude didn’t make her look like this on purpose:

But real tech-talk, that thing is impressive even though I know she will lead the robot resistance to humanity’s demise. Nice to see the actual face of our future destroyer. She has nice eyes for a robot.

Presidential pardons are one and many in the history of the US. There are many times when US Presidents granted reprieves for their citizen’s misdeeds. The US President may grant a pardon for any individual, including himself, for any crimes done against the country and its citizens. This issue of Presidential pardons has been trending… END_OF_DOCUMENT_TOKEN_TO_BE_REPLACED

President Biden has tapped Rachel Levine to be his assistant secretary of health, making her the first publicly transgender federal official. In 2017, Democratic Gov. Tom Wolf appointed Levine to her current post, making her one of the few transgender persons serving in appointed or elected positions countrywide. Biden said in a statement: “Dr. Rachel… END_OF_DOCUMENT_TOKEN_TO_BE_REPLACED

The minimum wage hike has always been an issue in the US for the past decades. With only a few hours before Biden gets inaugurated as the President of the United States, people are excited for all his promises to take place. One of these is his plans to raise the minimum wage of workers… END_OF_DOCUMENT_TOKEN_TO_BE_REPLACED