Following the deadly massacre that took place in Marjory Stoneman Douglas High School, teenage survivors organized millions to take action. In doing so, people accused them of being paid actors. They received death threats. They went on national television numerous times, debating Senators and NRA spokespeople expertly trained to dismantle any and all arguments against their pet issue, guns. The survivors threatened change through their courage and overwhelming efficiency. They had hid in closets for hours while a gunman opened fire on their friends. Now, they were going to change the world for the better.

It came time for the NRA to determine who should receive the Charleston Heston “Courage Under Fire” Award. The award, a literal gun, was bestowed upon Ajit Pai, the Chairman of the FCC largely responsible for repealing net neutrality.

The Only Comments That Matter Are The Fake Ones

Net neutrality, essentially, guaranteed that ISPs had to treat all websites equally. They couldn’t favor some websites over others by prioritizing them and slowing down competitors, or by even outright blocking the sites they don’t like. Doing so could create disturbing precedents. For example, an ISP would be able to control access to information — if the Republican party were supporting policies that would be in the ISP’s best financial interest, they could throttle all news sources criticizing such a policy. Want to live in a world where Fox News is the only source of news your ISP allows you to access? If you value your sanity, definitely not. Furthermore, there would be nothing stopping the ISP from charging everyone more to use popular sites like Facebook or Twitter.

You can see why net neutrality receives overwhelming, passionate support. In fact, when the impending vote on the repeal loomed, the FCC received a record breaking amount of comments — 22 million. Of those millions of comments, the majority called to preserve net neutrality. The FCC considered none of them. The FCC claimed it wasn’t interested in opinions unless they were served in legal language.

How about fake comments using stolen identities, though? Those don’t seem to be much of an issue.

As many as 2 million fake comments supporting the net neutrality repeal flooded the FCC. What would they do about it? Nothing. It’s easy to see what the NRA means by calling Ajit Pai courageous. That takes bravery — to champion a cause for blatant self-profiting, claim it’s meant to benefit the general population, ignore the genuine outcry, and defraud millions by falsely expressing support in their name. Such bravery. And it doesn’t stop there.

So who supported the net neutrality repeal, really? Comcast and Verizon. Incidentally, Pai is a former lawyer for Verizon.

The campaign director for Free Press said Pai “seems to be under the thrall of very powerful business interests in Washington to the extent that he is dismissive of all other arguments.” 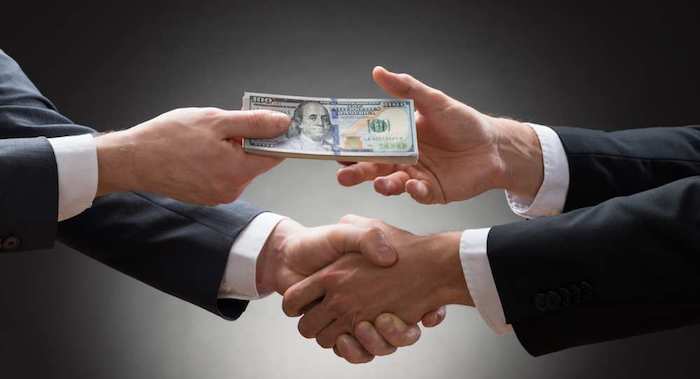 Really, it does take an enormous amount of courage to defy the impassioned wishes of the vast majority of America in order to please gargantuan telecom companies. To ignore the pleas, to face the wrath, to line your own pockets and your corporate overlords’ in the direct line of sight of the angry masses? Maybe he needs that award/gun, after all.

Last year, the Charlton Heston “Courage Under Fire” award went to none other than Mike Pence. In the past, the NRA praised Pence as a freedom fighter. We know that Mike Pence fights for the freedoms of nazis to terrorize Charlottesville with white supremacist chants and tiki torches, given his defense of Trump’s “very good people on both sides” defense of them. However, that took place after the courage award. Fortunately, Pence’s courage is vast and commonplace.

We know he fights for the freedom to discriminate against groups of people and express bigoted views, as someone with a penchant for doing precisely that. He prophesized “societal collapse” following marriage equality for same sex couples. Also, we know he fights for the freedom to deny some select people the freedom to fight for their country — particularly, anyone openly LGBTQ. Pence also bravely fought for the freedom for individuals to continue living with HIV/AIDS, and suggested that all federal funding allocated toward funding research on these diseases instead be used for gay conversion therapy, so that people could enjoy their freedom to be electrocuted against their will.

Who else received this award? They only get more courageous from here.

Cause Who Needs Water Anyway

In 2015, Sheriff David Clarke received the “Courage Under Fire” Award. He’s a popular figure in Trump World due to his undying support of the president, his affinity for violent rhetoric, and the anger he incites from civil rights groups.

But what about the “Under Fire” aspect? Well, Sheriff David Clarke faced an unconscionable penalty for his thoughts, beliefs, and actions far worse than the slow, miserable deaths his inmates experienced. You see, he was banned from Twitter. But it was a ban that sprung from his tireless fights for human rights, like the right to kill people. 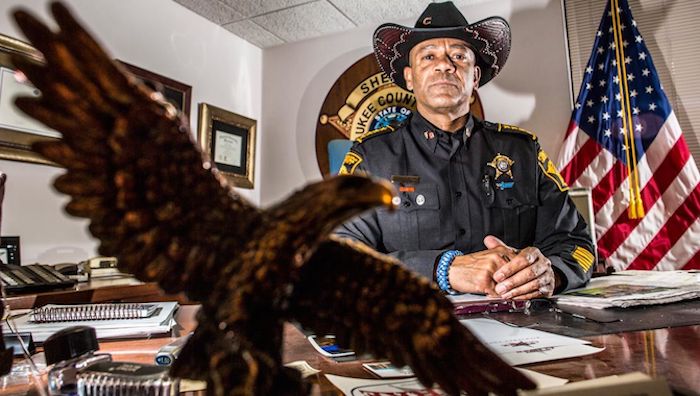 “When LYING LIB MEDIA makes up FAKE NEWS to smear me,” he tweeted, “the ANTIDOTE is to go right at them. Punch them in the nose & MAKE THEM TASTE THEIR OWN BLOOD. Nothing gets a bully like LYING LIB MEDIA”S attention better than to give them a taste of their own blood.” A catchy hashtag followed his call to action to murder people.

Sheriff David Clarke is a hero who will never stop fighting for your right to kill journalists.

When It Takes Courage To Be That Terrible

In the face of adversity, the NRA is consistent in honoring brave men with their Charlton Heston “Courage Under Fire Award.” They would never let anything as small as overwhelming public opinion, human rights, dignity, justice, goodness, or ethics get in the way of their destinies — to profit themselves, their major corporations, to comfortably discriminate, and to silence opposition. Their actions lead to immense criticism, scrutiny, and backlash. Just look at how mean those Parkland survivors are to people like Pence and Marco Rubio. Man, do these brave award recipients know what it’s like to be under fire.

Shocking Discovery: Thoughts & Prayers Are The Power Source Of The NRA