What If Trump Has Been Trolling Us All This Time?

Could the President actually know what he’s doing, with his dangerous, incendiary Twitter comments and wacky behavior? Or is he as clueless as we all believe him to be?

What if his every move is the action of a very savvy man who’s flouting his untouchable status by trolling the entire world? 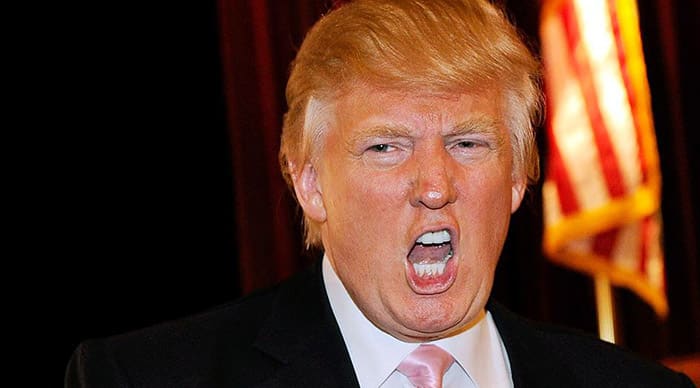 The one thing everyone can agree that Mr. Trump has been successful at is building his brand. Under his leadership, “Trump” began as a high-end real estate company, but became a household name. He’s leveraged that brand on countless high-rise buildings, golf courses, resorts, and casinos. His success in that area has been mixed, but enough that he’s been able to stay in business for many decades.

He’s written or co-written over a dozen books, most of them covering the same topic: how to strike it rich and be like him. He’s also licensed his name to a wide range of products over the years, including water, vodka, wine, energy drinks, chocolate bars, steaks, vitamins, perfume, eyeglasses, a board game, mortgages, chandeliers, an airline, a totally fake university, a line of apparel that was sold exclusively at Macy’s, and more. Most of those products are no longer being made.

Whether or not he deserves the credit he receives for his real estate business, you have to agree that you can’t get your name on that much stuff without at least some business know-how.

Did you know that Donald Trump is the wealthiest person to ever become President of the United States? (He’s also the oldest.) His estimated 3.7 billion net worth makes him wealthier than all forty-four previous Presidents combined.

Clearly, he’s doing something right. Even if it’s just slapping his name on various and sundry products and buildings, it’s a strategy that’s worked for him. As much flak as he gets for being a boisterous, offensive moron… He can’t be a complete idiot, because he really is rich and successful.

And he doesn’t need to be President to prove that success. 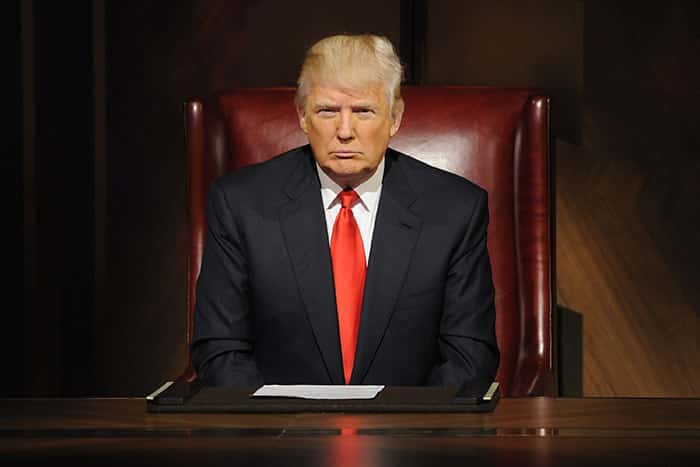 Long before he was President, long before he was the star of The Apprentice, he was billionaire New York socialite and real estate magnate “the Donald.” Either directly or indirectly, his personal affairs were frequently the talk of the town in New York City as his fame and fortune increased. All three of his marriages were massive societal events that anyone who’s anyone never dared miss.

Even Bill and Hillary Clinton attended one — his last one, to Melania in 2005. Trump was a supporter and financial contributor to their causes, including their nonprofit organization and Hillary’s winning run for New York Senator. Photos exist of the two couples arm-in-arm, partying it up at the reception, all big, friendly smiles and Page 6-worthy duds.

How he managed to do it is a matter for another day, but somehow he became as famous and well-known as Hollywood’s biggest movie stars — without ever being one.

Trump’s 14 seasons of hosting The Apprentice elevated his profile further, and probably made him even better at working the media to his advantage. His fame has always been tied to his image as a rich American living a glamorous lifestyle, and he pushed this guise hard on The Apprentice.

Looking back on his Presidential campaign, it’s impossible to ignore how well he manipulated the media. He was the favorite topic of every major news outlet, dominating front pages, TV screens, and news alert headlines for a full year-and-a-half. His bizarre behavior on camera (like when he mocked Marco Rubio by slinging water, or that time he hugged the American flag) combined with the politically incorrect things he constantly spouted off the top of his head made for very high ratings. He was only too happy to provide those ratings, playing the media like an orchestra conductor.

Skeptics might claim that Donald was just “being Donald,” that his outrageousness was the truth of who he really is, and that running for President merely put his crazed conduct on display for everyone to see 24/7 — i.e., he wasn’t “playing” the media so much as benefiting from it’s wide-eyed gaping at his endless disregard for political correctness. Maybe that’s true, maybe not. Either way, whether they applauded his frankness or were appalled at his rudeness, Trump was the darling of American media for 18 months.

Consider this: What if he was using all of that media savvy he’s learned over the years, intentionally being as outrageous as possible during the campaign in order to get more headlines? What if it was all a calculated strategy to make him more famous than ever? (If so, it worked.)

After all, if there’s one thing Donald Trump loves, it’s fame. He’s demonstrated a lack of scruples on countless occasions — there’s ample evidence that he’s a pathological liar, among other things — so why would he care about the moral implications of the twisted road he takes to becoming the most famous person in the world? 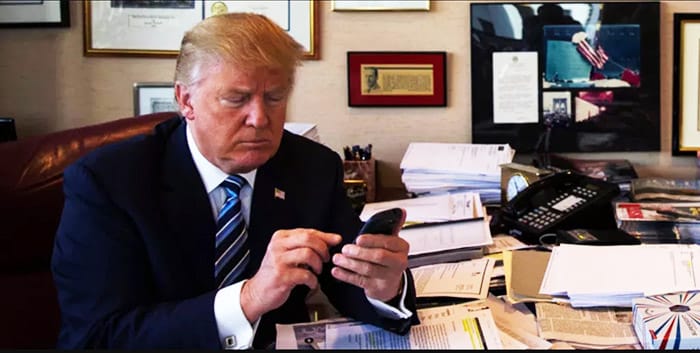 When he signed up for a Twitter account in 2009, he found the perfect medium for communicating regularly with his fans. Short bursts of soundbite quotes that he could send out personally, going around the media and whatever handlers he might have? He was probably kicking himself for not thinking of this glorious social media tool first.

On Twitter, he can be as blunt, insensitive, and immature as he likes, with immediacy and zero filter between his mouth and his followers. It’s Trump Nirvana. (Trump-vana?) And he has said all sorts of inappropriate things, inflammatory things, flat-out untrue things. He threatened a nuclear war with North Korea on Twitter!

Who knows what the covfefe he’s going to Tweet next? It’s impossible to predict, and that’s the point.

Despite this — actions that from any other user would result in being banned — Twitter refuses to remove him. They may claim that they’re doing it for “historical significance” or something, but they’re not fooling anyone. Donald Trump is their meal ticket, their most important user, having elevated Twitter’s relevance higher than ever.

Trump knows that he’s got Twitter over a barrel. Once again, he’s manipulated a public medium to his benefit in a way that no one else ever could. Most people would never even try.

Does that make him smarter than anyone believes? Or just incredibly serendipitous? 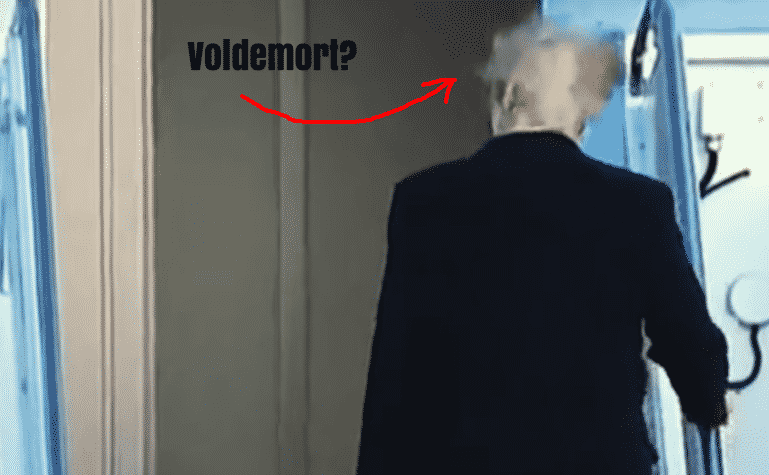 There’s a famous story — relayed by John Oliver in a 2016 broadcast — about how Trump gave an interview to Spy Magazine in 1988, and the finished article referred to him as “short-fingered.” The editor of that article told Vanity Fair that to this day, some thirty years later, he still receives letters from Trump in which there’s a photo of the Donald from some famous newspaper or magazine. On the photo, Trump circles his own hand with a gold Sharpie, and then adds a note that says, “See? Not so short!”

That’s real. It’s not a joke. It really happens.

Can we take a minute to talk about the hair? There’s clearly something unnatural going on there. No one knows what it is, but it involves the mother of all comb-overs and God only knows what product(s) to hold it in place. (Which doesn’t always work.) Remember when he had a woman come up to the stage at one of his rallies and feel his hair to prove that it was real, and really attached to his skull?

Who but the vainest person alive does things like this?

There’s also evidence that he wears dentures, though of course he vehemently denies it. After all, a perfect specimen of humanity like himself would never have fake teeth or tiny hands or goofy hair that conceals a balding head.

The point is: This is a man who cares so much about what others think of his appearance, with such thin skin, that he goes out of his way to prove over and over again that rumors about him are not true. (Even though many of them are.) He’s almost vindictive about it.

Could his Presidency be yet another case of him proving to the world that everyone is wrong about him? He wouldn’t really go to such an extreme to prove his point… Would he? 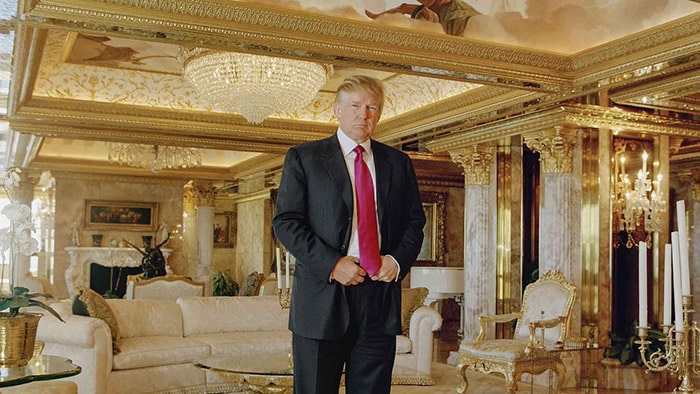 What would it mean if any or all of this is true? What would he be playing at? To what end?

The logical answer is that he’s in it for the fame. Or proving that his egotistically massive self-image is how everyone should see him. One needs only look at his history and pretty much everything he says and does to see that fame is one of his favorite things in the world. The desire to win is what drives him. There’s nothing he cares about more than success, which he equates to all the evidence you should ever need that he is, in fact, a “stable genius.”

There has to be more in it for him than fame, or proving people wrong about him? Right? He couldn’t possibly be undertaking drastic administrative actions that damage international relations and threaten the planet’s survival… to prove his awesomeness?

He wouldn’t do that, right?