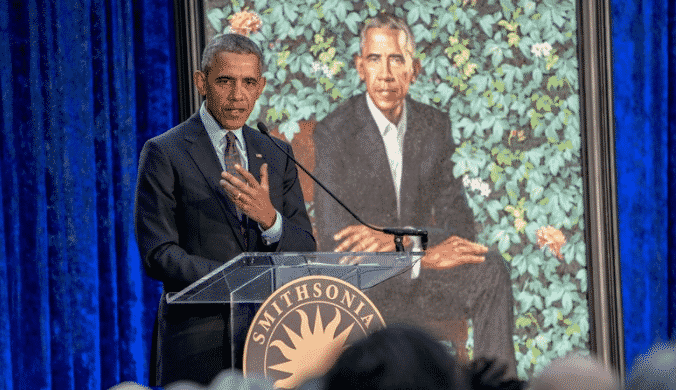 So as we are sure many of you heard, the recent portraits of the Obamas have been publicly revealed and capture the commanding presence and charisma of the man and his wife quite perfectly. Of course, with Barack Obama being the charming man he is, he couldn’t help but take this opportunity to poke a little fun at himself.

While talking about portrait (painted by artist Kehinde Wiley, who KNOWS to dress) during unveiling, Obama said to press:

Self-deprecation is something our current leader doesn’t even know a thing about, truth be told. And seeing this moment was a refreshing reminder that not all hope is lost. Only three years or so left and maybe we can fix this mess we’re in.

Image and story Via

The world is devastated by the news that Britain’s Prince Philip, the Duke of Edinburgh, has died at the age of 99. Palace media confirms that the Duke has expired mid-day today, April 9th. The announcement did not contain any specifics on the cause of death. The United Kingdom will enter a state of national… END_OF_DOCUMENT_TOKEN_TO_BE_REPLACED

Who would have known that religious prophets would be among the most loyal supporters of former President Trump? In fact, it has been observed that the most conservative Christians may have been the right amount of push for Trump’s presidential win back in 2016. Since Trump’s election back in 2016, numerous self-proclaimed “prophets” have been… END_OF_DOCUMENT_TOKEN_TO_BE_REPLACED

President Biden falls and slips multiple times on the Airforce One Steps and PEOPLE ARE GOING CRAZY! What’s the big deal? Some people are hating, while others are making memes just for the fun of it. We are all human, aren’t we? Everyone’s expected to stumble some time in their lives. However, with the internet… END_OF_DOCUMENT_TOKEN_TO_BE_REPLACED