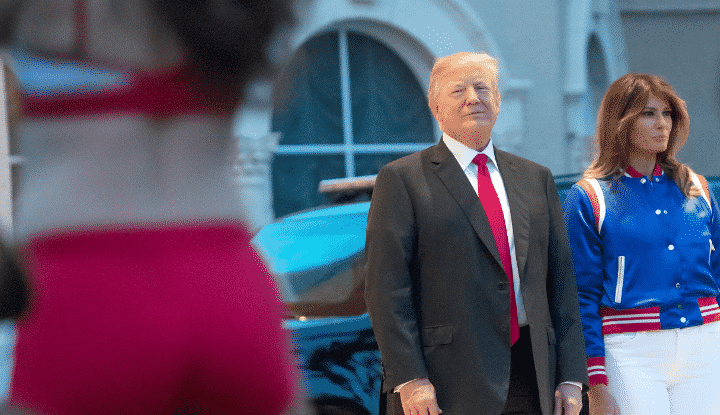 Say what you want about Donald Trump, but Melania Trump has been doing a decent job of smiling in the background and not stealing his spotlight (as you know, he would not allow such a thing), and to her credit, Donald Trump (especially as president of the U.S.A) must not be the easiest person to deal with but she seems to do it with grace. And God knows she needs it for moments like this.

Long story short, Donald and his wife were holding a Super Bowl party at one of his lavish mansions this weekend, and Trump decided to invite some rather lovely cheerleaders for said party. After completely skipping the National Anthem (which by the way, he has condemned athletes for doing through his Twitter, which should come with a mute button), he dissed Melania completely and walked over to talk up all the lovely, half-dressed cheerleaders who he paid to pay attention to him.

Listen, ima keep it real for a minute here. Don, buddy, your wife is stunning and won’t be forever (gravity HATES women) so maybe act like a gentleman and president first and take her along with you to meet and greet the pretty girls? It will make you look classier, it will make her feel less uncomfortable, and it will send the message to everyone watching that you actually may think with your brain and not your TINY brain most of the time. Truth is, though, this is nothing new. The man is known to be very creepy when it comes to how he treats women, and he doesn’t hide this fact.

Melania, you don’t deserve that. Hit me up over here, I will gladly pay you the attention you deserve. And my hair is not a dead squirrel glued to my head, so that will be a refreshing change for you!