What It Was Like to Get Missile Threat Warning From...

If you can see the above picture you now see what thousands of Hawaiians saw on their cellphones Saturday, warning them of an unavoidable and very real missile attack heading their way. So immediately, you have an entire island of people flashing back to Pearl Harbor and suddenly making peace with those they love under the guise they were about to die. A lot of us believed this was North Korea’s first “shot” at us. A sort of proverbial warning shot with little-to-no warning.

Come to find out, they weren’t going to die and there was no missile. At least so they say.

Now I am gonna call bullsh*t on this, but the Hawaiian Govt. issued a public apology saying that someone hit a wrong “button” and the whole thing was a mistake. Yeah, um, no. Buttons for such instances are often only put into the hands of the most powerful, so safe to say there was NO missile, but do not necessarily believe that is because someone hit a wrong button. 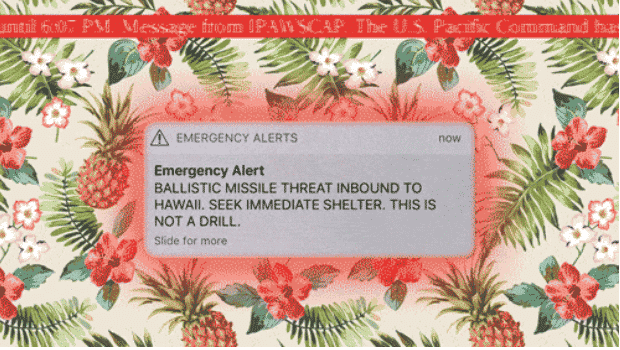 Here is an inside account from a writer at the DailyBeast:

Somewhere deep in sleep, dreaming I am at work… why did everyone leave their phones in the office?… then I feel my wife’s foot tickling me… stop it… then: ALERT! LOUD! What’s that? Turn off your alarm, I think.

My wife leans over and shows me her phone, which displays a dull black and grey EMERGENCY ALERT reading “BALLISTIC MISSILE THREAT INBOUND TO HAWAII. SEEK IMMEDIATE SHELTER. THIS IS NOT A DRILL.”

It’s 8:08 on a Saturday morning. I bolt out up and out of bed, think what everyone else across Hawaii must be thinking: “WTF?!”

Instinctively I rush to the kitchen, passing my 13-year-old son who is sitting on the couch in the living room, holding his phone (typical) presumably playing a game. I rush to check my work phone on the kitchen counter, scrolling through Twitter to see similar disbelief from other people on Oahu.

Very unsettling stuff. There was most likely a genuine missile threat that got negated, so the media went with the “mistake on our part” story to keep the masses from needing to buy diapers.

My suggestion, buy some diapers.

We got lucky today. Next time, we may not be so lucky, real talk.