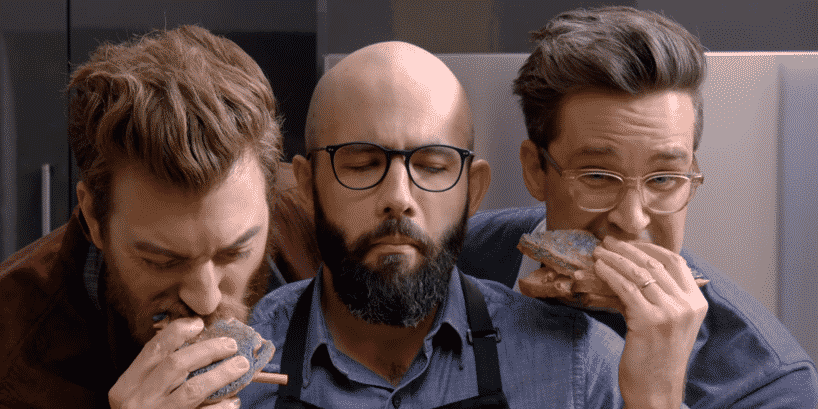 The guys over at GoodMythicalMorning are insane but I  mean that in the best way possible. They took all the tropes of regular morning TV shows and flipped them on their head for their YouTube channel, and the end result has been much well-deserved notoriety as a result of their often hilarious shenanigans. Just watching what they eat alone can be both terrifying and mesmerizing.

One of the things they do is take fictional food created on TV shows and in movies and attempt to both make and eat (at least a LITTLE) bit of their creations for the entertainment of the masses. As you are about to see for yourself, it does end up being incredibly entertaining, oddly enough.

Not sure how I feel about the sandwich itself, but man, the guys are a blast to watch. They are like the adult version of that one kid from your grade school who would eat dirt to make other kids laugh.

(Video Also Featuring the Culinary Stylings of Binging With Babish)

All allegations remain just as allegations, even half a year after the outbreak of the coronavirus pandemic in China. Everyone outside of the country is left to their own devices to decide whether or not what they see on social media is true. However, things take a different turn when the complaints start to trend… END_OF_DOCUMENT_TOKEN_TO_BE_REPLACED

In his latest weekly blessing at the Vatican, Pope Francis has warned Catholics about the dangers of gossip. Although his weekly blessing is not related to COVID-19, the current pandemic tormenting the world, he has raised important points that everyone must remind themselves of. Pope Francis has been in the highest seat of power in… END_OF_DOCUMENT_TOKEN_TO_BE_REPLACED