Magic Johnson gets behind the drive for HIV home testing

by SocialNewsDaily 5 years ago8 months ago

It is strange how the media clouds our perceptions. Thirty years ago, phrases like “AIDS epidemic” were being shouted from the rooftops. HIV and AIDS were cutting a swathe through the world, particularly, but by no means exclusively, in the gay community, and anybody could be struck down, as the likes of Rock Hudson, Freddie Mercury and Kenny Everett proved only too clearly.

Today, anyone who has not had a brush with HIV might think it is no longer a problem. HIV is eminently treatable, and the right treatment regimen can mean it has little effect on day to day life and longevity.

Diagnosis is the key

The sad truth is that living with HIV does not sell papers in the same way that dying of it does. The names of those who have passed, such as those mentioned above, are still uttered in revered tones. Yet the likes of basketball legend Magic Johnson or Frankie Goes to Hollywood front man Holly Johnson (no relation), who have both been living with HIV for more than 20 years and continue to do so, are now seen as yesterday’s news.

This is a dangerous precedent. The key to successfully managing HIV is early diagnosis, the key to early diagnosis is to get tested and the key to getting tested is public awareness. Magic Johnson is a man who is all too aware of the fact, and this is why he is publicly endorsing the growing range of home HIV tests that are now available to buy online or over the counter.

Home HIV testing is available to everyone

From the outside looking in, it seems ludicrous, but there are plenty of people who are so worried about the possibility of being HIV positive and so nervous about asking to be tested that they simply cannot bring themselves to go to a clinic or ask their doctor. This is why HIV test UK innovations are of such crucial importance.

The tests are easy to perform, requiring just a small blood sample from a pinprick, and provide accurate results in a matter of minutes. The kits also provide advice on what steps to take if the test provides a positive result. 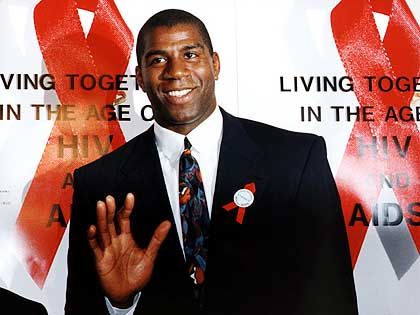 Magic Johnson is a man who has been there, and he understands the problem better than anyone. He also knows the importance of media publicity and the difference that putting his name behind an awareness campaign can make. In an interview on the subject, he told reporters he has seen an alarming trend in people becoming more blasé about HIV, and thinking it has somehow gone away, just because there is less media discussion.

He hopes that the availability of home kits and a public campaign to get people using them will lead to renewed awareness and will save lives.  He worries that the millennial generation is simply unaware of the potentially dire consequences of HIV being left undetected and said: “Early detection saved my life. We jumped on a regimen right away”