Love is Love: Tasmanians Hijacks Road Side Sign in Favor...

Love is love is all the message wrote, laid out in painted tires across a Tasmanian hillside which is normally used to advertise the next big rodeo. To us we would think little of it, but people driving by (including the owner’s of the land who had no idea until they saw it) were quite shocked. Though it seems harmless (and is), the act of low-key vandalism is actually a plea for people to vote yes on gay marriage, which is coming up to vote and causing quite a split among locals. 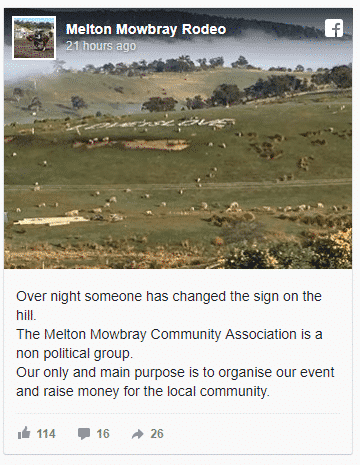 The landowner, named Andrew McShane, claims to know nothing about who put it there (which is most likely true) and if the end message they are trying to send is just to let people who love each other get married, regardless of gender, that is actually a pretty classy way to do.

They are not shoving an agenda down anyone’s throat. They are not picketing or screaming or throwing things (as it seems like that is how we often air our grievances here in America) but rather, they just left a roadside message that they hope some voters agree with.