What Does Your Favorite Emoji Mean Around the World?

Emojis are used around the world to express emotion using quirky yellow faces and fun symbols and figures. Although it’s assumed that the person on the receiving end of your text message understands what you mean when you send your favorite emoji, a recent report by HighSpeedInternet.com might suggest otherwise.

The analysts at HighSpeedInternet.com recently compiled a report that shows the meanings behind popular emojis in nine different English-speaking countries. They administered an international survey using an online survey distribution platform to find out what people really mean when they send popular emojis in their messages. The team’s findings show that even those of us who speak the same language attribute different meanings in the language of emojis.

What’s your go-to emoji? According to the report, the most-used emoji for each of the nine countries was the standard smiley face. This is why they selected the second most-used emoji to highlight in the map above.

As you can see, the UK, the US, Jamaica, and Trinidad are all laughing until the tears start falling. New Zealand and Canada also shared the same emoji favorite, using the heart emoji to show some love in their text messages.

One interesting outlier was Ireland. The Irish are using the smiling poop emoji to express themselves…odd. Australia also kept things original with their emoji usage, using the winking tongue out emoji frequently, and New Zealand preferred the winking kiss emoji.

The same emojis mean different things to individuals around the world. As you can see in the image above, there’s quite a discrepancy in emoji definitions among the English-speaking countries surveyed in the report. Some countries like Ireland and Trinidad were more likely to pick up on explicit meanings for emojis like the eggplant and the peach, while other countries viewed these emojis with more innocent eyes, reporting they simply meant “peach” or “eggplant” and nothing more. As for the fire emoji, most countries agreed it should be used to describe an actual fire, but the UK and Trinidad used the symbol to express attraction.

Although there were definitely some discrepancies across the board, you might find comfort in knowing that you can use the winking kiss emoji internationally without being mistaken for flirting with the recipient of your text message. 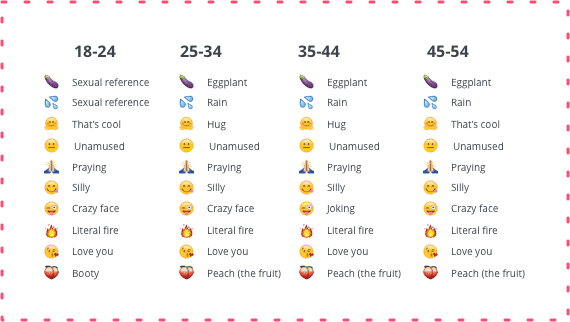 If you’re over the age of 25, it’s possible you’re missing out on some hidden sexual references in commonly-used emojis. The data revealed that survey participants ages 18 to 24 assign vastly different meanings to emojis than older generations. For example, this was the only age group to describe the eggplant and the water spray as sexual references. This age group was also more likely to associate the peach emoji with a “booty” than with the actual fruit.

When the team crunched the actual numbers, they also found that 25 to 34-year-olds and 45 to 54-year-olds were less likely to use the kissing winking emoji platonically. Many (but still not the majority) of the participants in these age groups said they typically reserve this emoji for flirting with a love interest.

If you’ve learned anything from this report so far it’s that emojis are pretty confusing. The analysts pulled out the emojis with varied results to show just how mixed our emotions really are when it comes to tricky symbols. As you can see in the chart above, the peach emoji can take on a whole lot of different meanings, from the actual fruit to a booty and a sexual reference.

The “Folded Hands” emoji is also a serious point of confusion that none of the survey participants had a correct description for. Although the top three meanings assigned to this symbol were praying, blessed, and clapping, the emoji is actually meant to be a Japanese symbol for “thank you.”

The “hug” emoji also proved to be pretty confusing to participants, with high percentages of respondents reporting they use it to say “that’s cool” or to symbolize a “funny shrug.” 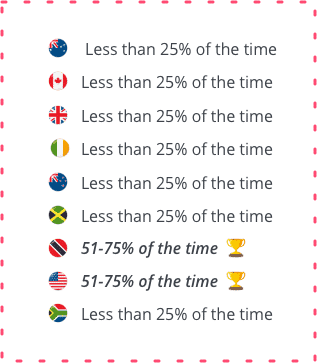 Although there seems to be a bit of confusion around the exact meaning of each emoji, it’s still safe to say that these cute little blobs and colorful symbols could be considered a universal online language. On top of that, they’re certainly a fun way to spice up your texts – no matter what message you’re trying to send. If you’re interested in reviewing the full report, you can find it here on the HighSpeedInternet.com blog.

The Use of Emojis and Emoticons and the Evolution of Netspeak

Author bio: Cosette is a writer and content consultant based out of SLC. She is particularly interested in covering topics surrounding artificial intelligence, connectivity, and consumer technology. You can check out her latest work on Twitter @CosetteJarrett.