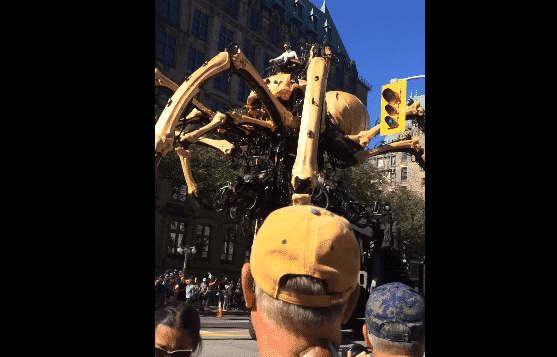 First off, this title is a slight bit misleading. As much as I would LOVE to tell you a giant, robot spider took over a church and now leads the sermon it every Sunday, that would be both freaky and hilarious, but that is not the case here.

In this case, the Archbishop of Ottawa is catching heat for letting someone put up a giant, robotic spider on top of the Notre Dame cathedral there. Yes, you did read that part correctly. There is a giant, mechanical spider on Notre Dame in Ottawa, Ontario. The exact spider can be seen in video below.

The show opened July 27 in the evening, with Kumo “waking up” to organ music from inside the cathedral. As the spider, suspended from cranes, climbed off its perch between the towers, “snow” fell from above as part of the event’s special effects.

As you can imagine, there has been quite a public outcry, with some people even calling  it sacrilegious or satanic. Hate to take the wind out of their sails but it was a pre-approved art instillation, and that is all it is. Odd to put on a church, yes, but regardless, it is there.

But still, I can also understand why some church goers would be put off by a giant, mechanical spider (that moves, by the way) nested atop a church steeple. I can see where that is a little spooky (though kinda badass, really.)

It’s name is Kumo, by the way. Maybe if you treat our new robot overlords well they will embrace us as opposed to putting us into human zoos.

Now that the election results are almost final, we all want to ask what’s going to happen to Donald Trump after leaving the office? All US Presidents inevitably reach the point where they leave the White House.  Besides, the constitution states that all US Presidents are subject to a two-term limit. What do former presidents… END_OF_DOCUMENT_TOKEN_TO_BE_REPLACED

This is the first time in modern history that the US held presidential elections in the middle of a pandemic. In truth, the US elections may have overshadowed COVID-19 and the side effects are limitless. America is facing a tough crisis of discontentment with the current administration. An understandable case but a situation that may… END_OF_DOCUMENT_TOKEN_TO_BE_REPLACED

America’s political climate has been seeing records of changes over the past few decades. However, US election results record a list of surprising firsts for the first time in a long time. With the power of the youth overpowering the US election results, we see how differently they see the world. It shows how inclusivity… END_OF_DOCUMENT_TOKEN_TO_BE_REPLACED