Nothing is worse than a commute into work. Granted, I wouldn’t know what that is like now because I chose the awesome life of a freelance writer. Hell, I rarely have to even have to take off my robe. But I have heard a commute to your soul-sucking job can be exhasuting.

So imagine your shock and awe if you were driving to work and suddenly, you came to a dead stop on the road so a young elephant can practice its soccer skills? I say this because that is just what happened to some drivers in India recently, as captured in the video below.

It all started when a man by the name of Akshoi Gogo (he sounds like a stripper) got stuck in that very traffic jam decided to see what was holding everything up so he got out of his car and checked it out. Much to his surprise, the elephant seen above was cavorting and practicing some slick soccer moves. 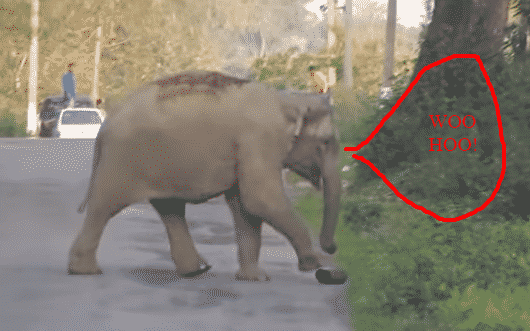 As anyone could see, the elephant was clearly having some fun with a piece of plastic, and after a forty-five minute display of some sick soccer skills, it lost interest and went back to elephanting, which is rumored to be what elephants do best.

Also, the commuters got an awesome story to tell (and the elephant clearly got better at soccer in the process, too), so there’s a silver lining to everything.