How Much Is Jack Sparrow Really Worth?

Everyone’s favorite pirate, Jack Sparrow is back for another Pirates of Caribbean installment. As the newest film gets ready to hit theaters, our friends and jewelry specialists, F. Hinds is taking a look at how much Jack Sparrow and all his jewels are really worth.

Captain Jack Sparrow’s jewelry has been revealed to be worth a hearty $281,731 ahead of the release of the latest installment in the Pirates of the Caribbean on Friday, May 26th.

Valuations by jewelry expert, F. Hinds, worked out how much the buccaneer’s iconic bling would be worth in the real world if recreated as one of pieces. Often referred to as the worst pirate anyone has ever heard of, the jewelry presumably has questionable origin, however. 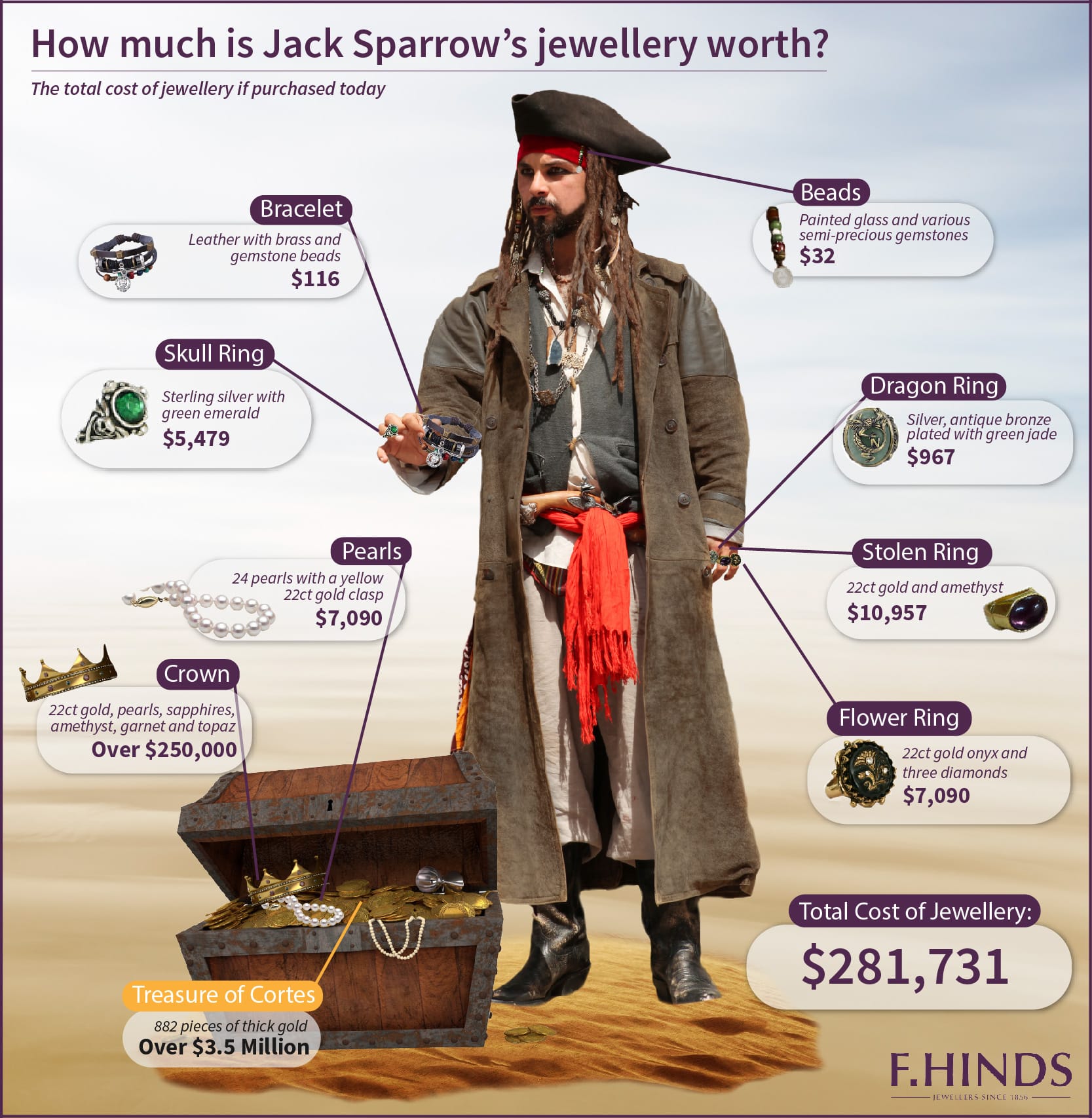 One of Jack’s prized possessions, and made from sterling silver embedded with a single green emerald stone. This would set you back $5,479, making everyone around you green with envy.

This meticulously carved ring would take the skill of a master to create, so the value is in the craftsmanship rather than the precious metals. The design is from the Far East containing a mid-green jade stone, valuing at $967.

Assuming this has high gold content, the design feature is a carved gemstone, with a slight red tinge, inlaid with a gold floral design set with diamonds. A lot of skill would go into creating this ring contributing to its overall value. This piece, seen as an antique containing 22 carats of gold and high-quality diamonds, would cost $7,090.

Whilst in Jack’s possession on his quest to find the chest of the Treasure of Cortés, the weight of the 22 carat gold alone adds up to create a substantial starting point for this piece. In today’s world the oval shaped amethyst is relatively inexpensive, but in Jack’s time would have been prized due to its rich purple color associated with royalty. To reproduce this ring today you would expect to pay around $10,957 making it the most valuable of Jack’s rings.

It’s not all about the silver and gold treasure, the leather fashion accessory found on Jack’s wrist is made from worn leather and gemstone beads, taken to any leather craftsman worth his salt, this piece of jewelry could be made into a one-off piece at an affordable price evaluated at $116.

Using best quality modern day cultured pearls from the South China Sea, Jack’s pearls would retail around $7,090. The pearls Jack is wearing would have been hand dived for and is incomparable in today’s market.

The famous head beads worn by Jack from the very start consists of a red patterned glass beads and various other semi-precious gemstones. The iconic coin at the bottom of the beads is supposed to be a pirate piece of eight, in today’s world it’s a Burmese silver colored Pya as used in the actual films. You could recreate this for around $32.

The typical pirate booty of gold and silver makes up the bulk of the value, Jack’s crown which he stole from the Isle de Muerta is worth upwards of $250,000 and is bejeweled with pearls, blue sapphires and large semi-precious gemstones… luckily for Jack the crown isn’t cursed.

The Treasure of Cortés

This isn’t included in the overall costs of Jack’s jewelry, but it can’t go unnoticed. This treasure chest is jam packed with 882 pieces of Aztec gold coins, valued at over $3,500,000.

Now when you see the movie in theaters next Friday, you can be able to spot out all of these priceless jewels!