This Bully Chose The Wrong Person To Mess With [Video]

Bullying has become a hot topic in schools. In fact, we have seen record number of bullying instances taking place recently. Bully usually pick someone who is they think is weaker than them. Well, this bully picked the wrong kid to mess with and his mistake was recorded for everyone to see. 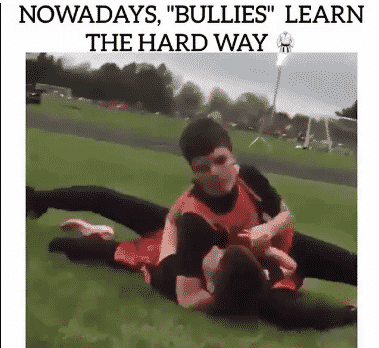 This video shows a larger kid approach a meek looking kid in glasses. He gives the kid a hard time and provokes a fight with him. When the kid doesn’t respond, the bully grabs him by the throat. That’s when the kid realizes what a weak joke the bully is.

He executes the perfect body slam and slams his tormenter to the ground. The bigger kid lays there with the wind knocked out of me, while the person filming begins to laugh. Hopefully, this so-called “tough guy” learned a important lesson.

Check out the footage in the video originally posted on Craziest Sports Fights.

Parents, Fight Cyberbullying With These Tips