#EdBallsDay: How A Twitter Fail Become A Viral Holiday

You’ve probably seen a mention of #EdBallsDay on social media, but many of you might not know the origins of such a strange viral trend.

A little background information should help you understand a little better. Mashable explains that Ed Balls “is a British politician who was a Labour MP for 10 years. He also served as Shadow Chancellor of the Exchequer from 2011-2015, before he lost his seat in the last general election.”

Since leaving the world of politics, Balls has gone on to star in a reality dancing show and other public appearances. Definitely shedding his serious government guy persona. This whole ordeal started in 2011 when Balls decided to do a Twitter search for his name. You know, see what people where saying.

There was just one problem, he mistakenly typed his name as a tweet, not the search bar. That’s when it all began. The Twitter fail was quickly retweeted and shared. It even became the subject of memes. However, the goof didn’t come into the spotlight until 2013. Somehow the twitter fail reemerged and urged people to celebrate the anniversary of Ed Ball’s twitter mishap, April 28. 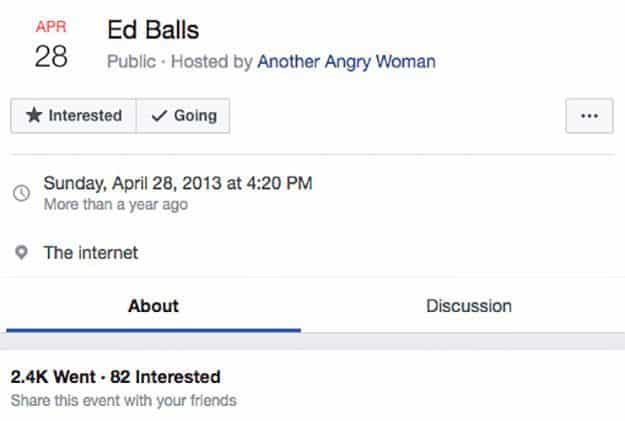 A Facebook event began to circulate on the Internet, inviting people to reshare and retweet the tweet. Shockingly, it went viral. More than 28,000 people took part of the strange social media event, creating #EdBallsDay.

It seems as if everyone took part in #EdBallsDay.

To mark the occasion I've finally framed my signed copy of that tweet @edballs #EdBallsDay pic.twitter.com/CxYEoTZnpd

The original tweet has been shared more than 28,000 times. It seems as #EdBallsDay will live on. Don’t forget to celebrate next April 28.

For more of these hilarious tweets, check out Mashable’s post about #EdBallsDay.