3 People Who Used Their Breakup To Go Viral On...

You’ve probably seen many couple’s loving photos plastered all over social media, but have you ever seen break up photos? Probably not, which is what inspired one Kalamazoo couple (or used to be couple). Back in February, Fox 17 reported Harrison Bach was scrolling through social media when he noticed an influx of his friends posting professional photos with their significant other. That’s when he got the idea to take the same type of pictures, but with his ex-girlfriend, Jackie.

“When I told her about it, she was like totally on board instantly because her and I were always really quirky with our humor,” said Bach during an interview at Western Michigan University. “It was like ‘Oh hey this is just funny and a little ironic and people will get a laugh out of it.’”

It turns out his friends did get a kick out of it. In fact, by that afternoon the photos had been retweeted thousands of times. Then Bach explains he starting receiving calls from major media outlets, like Buzzfeed and Cosmopolitan.

“Later that same day I’m getting calls from BuzzFeed and Cosmopolitan,” said the 22-year-old who’s studying Biology at Western. “I was like ‘this is getting weird’ but it was really funny at the same time.”

Yes, it is weird. But, the photos had gone viral which is exactly what Bach set out to do.

“Online there’s like little battles going on with people,” said Bach. “People are trolling each other. I just don’t get it. And it’s like all I wanted to do was take kind of weird photos and it got totally out of line. You know not weird, just artsy photos.”

Speaking of photo sessions, one family went viral for what they continued to do after their divorce was final. Victoria Baldwin and Adam Dyson went viral after posting a photo collage of what looked like normal family photos. However, the description is what made it unique.

The photos have since been shared thousands of times and stands as a true example of how important it is to put the children first. 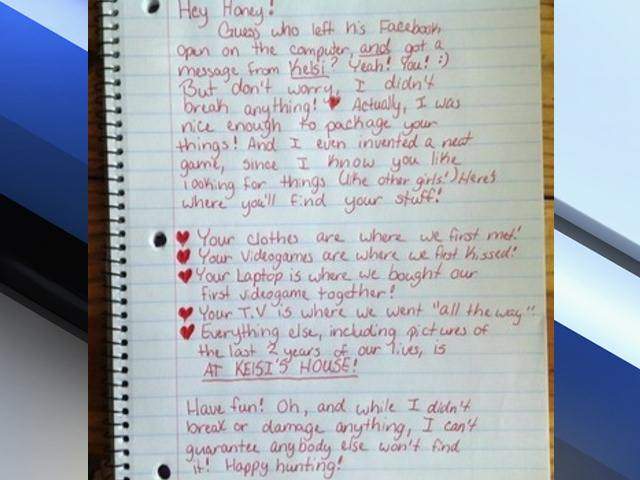 Dear John letters are so last year. One jilted lover decided to get creative after discovering her boyfriend was receiving Facebook messages from other girls. So, instead of destroying his stuff or going crazy. She bagged up his stuff and forced to go on a scavenger hunt revisiting important places of their relationship.

Back in 2013, ABC15 reported one of these original viral breakup trends. They listed the clever scavenger hunt clues and the girlfriend’s disclaimer.

“Your clothes are where we first met. Your laptop is where we bought our first video game together. Everything else, including pictures of the last 2 years of our lives, is at Kelsi’s house,” the anonymous girlfriend writes. “Have fun! Oh, and while I didn’t break or damage anything, I can’t guarantee anybody else won’t find it! Happy hunting!”

While these examples seem to be fun and games, experts point out that it has been scientifically proven that social media can lead to breakups and divorces. One divorce attorney explained that social media activity can even be used to counter the other side during divorce proceedings. So, be careful what you post! Your relationship (and future) could depend on it!

5 Rules for Handling Your Breakup on Social Media