Do You Need A ‘Furniture Prenup’, A Look At This...

A UK-based online furniture retailer, The Furniture Market, have introduced a “furniture prenup form” – suitable for anyone worried about the potential of losing their most prized possessions during a break up.

To settle any unwanted disagreements in the future, the form has been created after a wider survey, which asked the public which pieces of furniture would cause the most arguments over future ownership, indicated the size and scope of the issue. 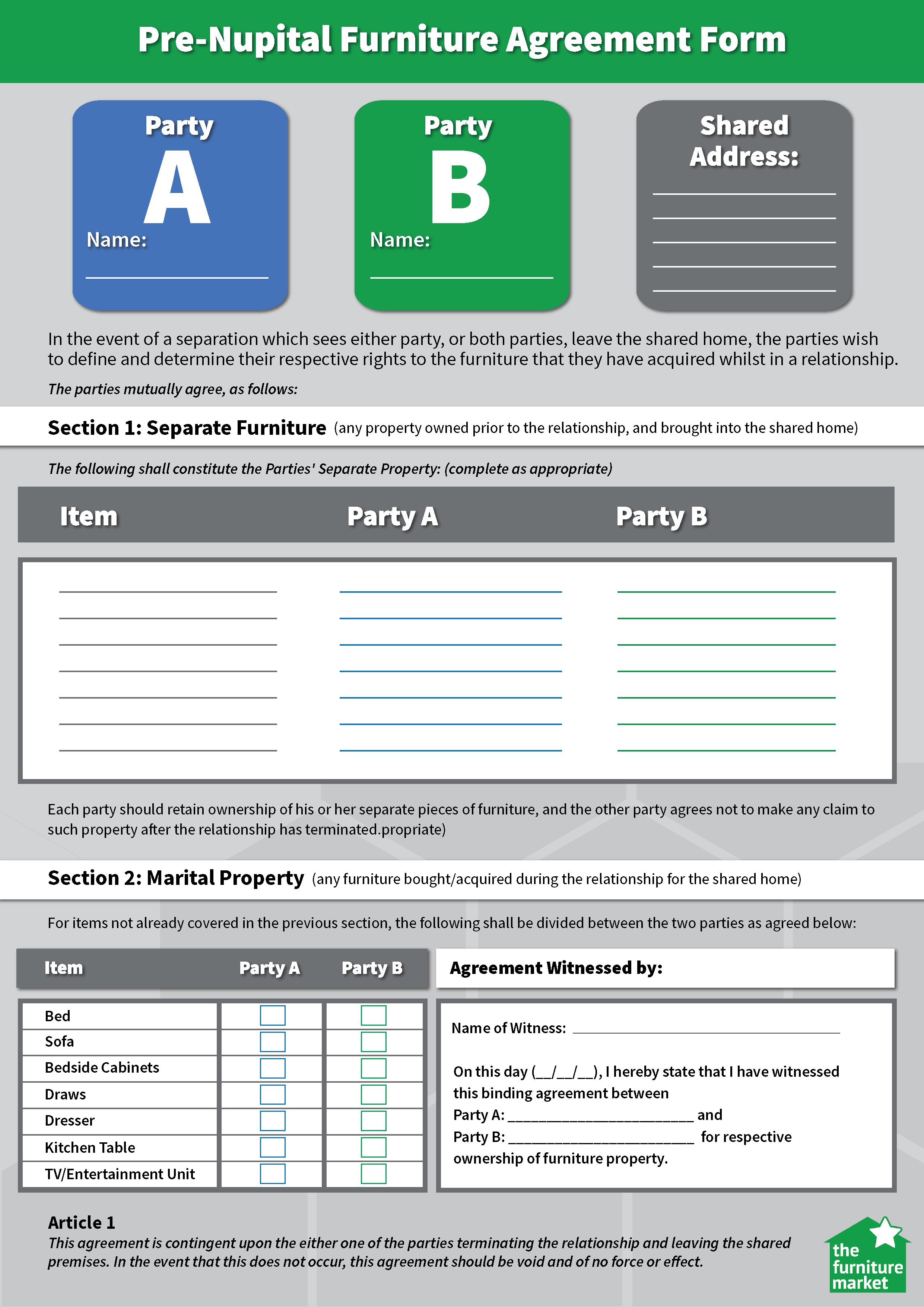 Reducing stress, time, and awkward negotiations, the form will revolutionise the post-breakup process of splitting up shared items. You can check out the entire form here.

The research suggests that deciding who keeps the TV/entertainment unit causes the most arguments, with almost a third (27%) of the respondents claiming it as their priority piece of furniture. The bed was second in demand (18%), closely followed by the sofa (17%).

Out of all pieces of furniture, and potentially in need of a post-break up “Marley and Me” marathon whilst cooped up behind a duvet, women were especially keen on keeping the sofa and bed. Unsurprisingly, the more sentimental items, including the home décor (14%), and the wardrobe (6%) were the next most popular to be at the forefront of disagreements for the females.

Men, on the other hand, would more likely be rubbing their hands together at the prospect of more ‘FIFA’ time on the XBOX, with 30% not willing to let go of the TV/entertainment unit without a slanging match. The bed (16%), sofa (12%), dinning set (6%), and bookcase (6%) were the next most popular items for males.

Across all age categories, the TV/entertainment unit was the most popular instigator of arguments. Those aged 18-24, however, found the bed to be equally as important – perhaps as a fundamental aspect to surviving University.

The findings imply that men are much more stubborn than women, with 58% willing to pay to keep furniture. Women were less motivated by this, with only 42% prepared to the pay the other half for the privilege. Whilst males are more inclined to splash the cash to keep items, the age group of 25-34 are the least likely to do so.

The survey also revealed that:

-The cities to have the biggest disagreements over the TV/entertainment unit were Chelmsford (42%), Wolverhampton (38%), Leicester (34%).
-Glasgow, Bristol, and Sheffield all chose the bed over the TV/entertainment unit as the main cause of arguments.
-The top three cities to choose the sofa as the main cause were Birmingham (23%), Coventry (29%), and Norwich (28%).
-The age group 25-34 were the most bothered about the future whereabouts of the furniture, whereas those aged 55+ were the least concerned.

“We were interested to find out which pieces of furniture were valued the most in relationships, and how far people would be willing to go to keep hold of their beloved items. With this is in mind, we thought what better way to settle any unnecessary disagreements during a breakup than to release a furniture prenup form. This would allow couples to distinguish the rightful owner of items upon purchase,” Robert Walters, Head of E-Commerce at The Furniture Market, said. “We were surprised to find the bed as the second biggest cause of arguments – we thought this would be one of the first things on the discard pile, along with any unwanted photos of the good times shared together. But we appreciate everyone needs a good night’s sleep. We understand that breakups can be tough times for people, so we hope the introduction of our prenup form can make life that little bit easier when going through this difficult period.”

The Furniture Market offers high quality design led furniture at a fraction of the cost of high street stores, by buying directly from factories. Founded in 2004 by Adrian Latham, it has since grown to become one of the largest oak and French and modern furniture retailers in the UK. The Furniture Market operates from a 30,000-square foot site in Cheshire and employs over 30 people.