Game Of Thrones Fans, Daenerys Targaryen Would Need Millions To...

by Meagan Freeman 6 years ago8 months ago

Listen up Game of Thrones fans, we just received this interesting study that we just had to share with you:

Viewers of the popular television show were left on a cliff-hanger at the end of Game of Thrones’ sixth series, with Daenerys’ fleet finally setting off to Westeros. Fans of the show are expected to see how the events pan out in the new series, due to air later this year.

Daenerys Targaryen would have to fork out an eye-watering £174,539,250 to get her army from Essos to Westeros, according to new research.

The research, conducted by global removals company 1st Move International, found that the Mother of Dragons would need 989 ships to transport her astronomical armada.

When making the 300-mile journey across the Narrow Seas, from Mereen to Westeros, to stake her claim to the Iron Throne, food would prove to be the costliest item on the manifest. Khaleesi would need to ensure provisions of 800,000 kg of hay each day, just to keep horses fed.

As well as hay for the horses, she would need to provide 1,025,750kg of food (spread across 142 provision ships) to keep her troops from an empty stomach. The combined cost of food equals £150,785,250, making up the bulk of the overall valuation. 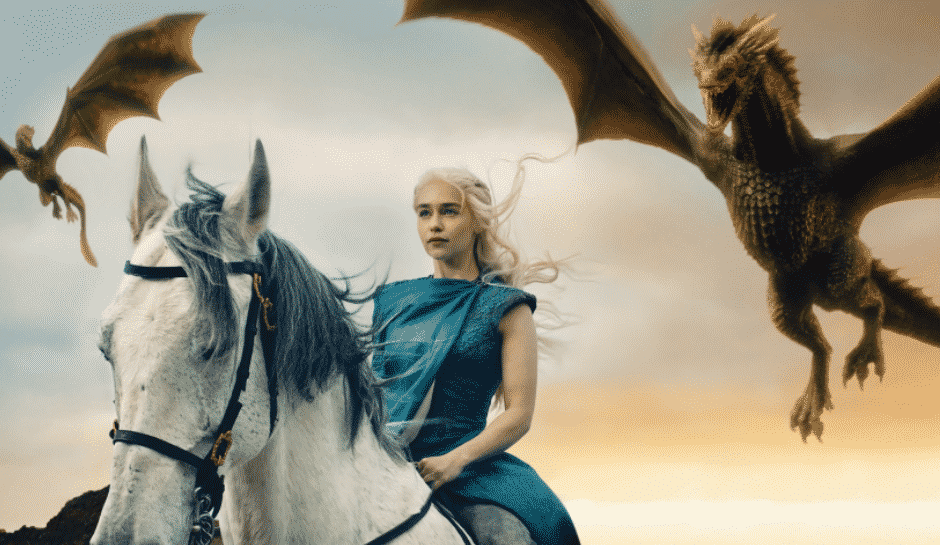 A full breakdown of costs and findings can be found here.

Ms Targaryen’s forces are made up of her highly trained eunuch warriors, the Unsullied (equipped with swords, shields, and an unwavering sense of loyalty to their queen), and the Dothraki (a 100,000 hoard of horse mounted warriors).

It would cost Ms Targaryen £8,492,500 to ship her soldiers (Dothraki – £7.9 million, and Unsullied – £592,000 equating to £79 per troop. To do so, it would require 430 troop carriers, the lion’s share of the armada. The arms required for her men would set her back £5,029,500 and add four ships to her fleet. However, owing to the fact they can fly; Khaleesi’s dragons would be exempt from any shipping charges, bringing the prospect of a fiery demise closer to any would be adversaries.

1st Move also factored a Royal Galleon for the Royal Council, which would be offered free of charge, as well as 12-ship strong armed escort, to blow any possible blockades out of the water, at a cost of £1,932,000.

“She’d probably have to make a visit to the Iron Bank for a loan to secure the funds for this voyage. On the plus side, the odds are weighted highly in her favour to stake her claim to the Iron Throne. With her huge army (and not forgetting her three dragons) you’d have to be either very brave or very stupid to get in the way of her and the crown of all the seven kingdoms of Westeros. It will be fascinating to see how it all pans out, and discover the answer to the question everyone asking – who will claim the Iron Throne and rule over the seven kingdoms?”

Founded in 1997, 1st Move is a specialist moving, packing and shipping company, offering fast, weekly overseas removals direct from the UK to over 6500 destinations worldwide.
1st Move is a member of the British International Freight Association (BIFA). With terminals throughout the UK in: London, Bristol, Birmingham, Manchester, Leeds Liverpool and Glasgow.

Siri is Dank and Full of Game of Thrones Punnage