President Obama isn’t the only World Leader using Twitter, in fact a new survey by the Digital Policy Council has found that 75 percent of the world’s heads of state now have a Twitter presence.

The DPC survey examined the social networking status of 164 countries and found that 123 of those countries have leaders with a Twitter presence.

In comparing numbers only 69 countries had World Leader’s with Twitter accounts in 2011.

While there are 193 countries recognized by the United Nations the DPC for unknown reasons focused only on 164 of those regions.

The study also found that President Barack Obama is by far the most popular world leader on Twitter with 25 million followers. In second place to President Obama is Venezuelan President Hugo Chavez with just over 3.5 million Twitter followers.

As Twitter continues to improve its platform we will likely see more world leaders join the network as they attempt to deliver their own messages at record speeds. 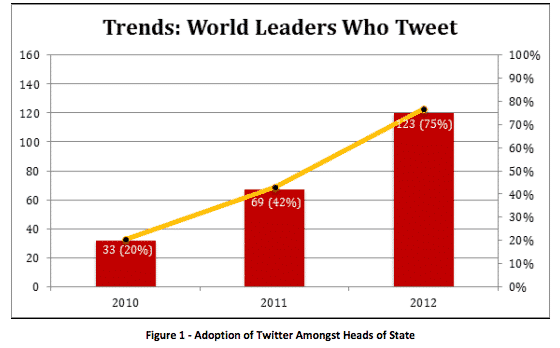 While world leaders may have accounts many of those Twitter presences are run by staff members and not the leaders who claim to own the accounts.