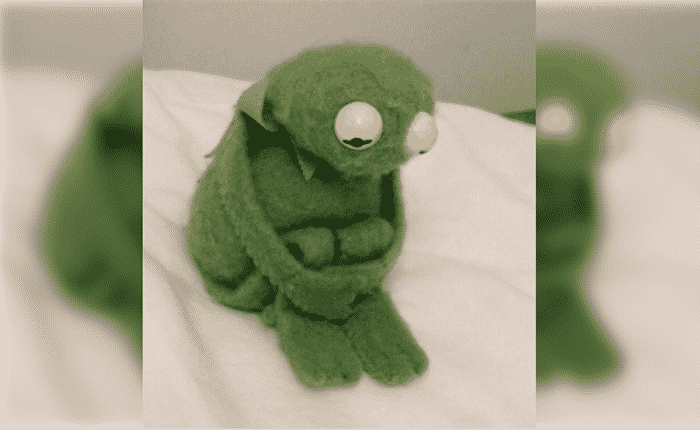 Oh, Kermit. It was all supposed to start out so innocently.

This particular tweet was supposed to be reassuring, but it seems the internet always has it ways of taking things off the beaten path — and into darker territory than we care to admit. Case in point, this original post:

when u give urself a gentle hug evrey night before u go to bed, reassuring urself that no mater wat, the day was yours bc u chose to live it pic.twitter.com/fTH8o5k3h9

Aaaw. Good for you, plus points for emotional health.

So the rest of Twitter wanted to carry over these feelings of tenderness and wonder.

when ur makin a snowman w/ ur niece but she cant roll big snowballs yet so u be the big snowball & wait for her to put a litle snowball on u pic.twitter.com/9gJGyYd9V3

@jonnysun when ur dog is taking up ur whole bed so u sit in the corner so you don't wake them up pic.twitter.com/THnBb75yHa

@jonnysun when you're sitting outside and become mesmerized by the way the grass ripples in the wind pic.twitter.com/hAmI6QxvtM

Don’t they just speak sweetly to our soul?

Enjoy the feeling while it lasts, because some Twitter users just took Kermit to a a cold, …

@jonnysun when you get overwhelmed at the dance and chill in a stall to collect yourself but don't want anyone to identify you by your shoes pic.twitter.com/VFXAvHIsg7

@jonnysun When ur in an argument with a loved one and ur thinking of the right joke to break the silence and make things okay pic.twitter.com/TJCQnlqS96

@jonnysun when ur homesick but u know that feeling is only possible bc u were brave enough to take a chance on the dream of a different life pic.twitter.com/JMzcMPyxYX

Now then. Take a deep breath. Here’ where things start getting darker.

@jonnysun when you realize that your daughter is now too big to hold without it looking silly, and you will never pick her up again pic.twitter.com/ZMbCAdUcB8

.@jonnysun when the painful memory comes back, but it's nice to feel the hurt, to feel anything. pic.twitter.com/aVsFA0DDvk

@jonnysun when you intellectually know that masculinity is a toxic prison but keep catching yourself perpetuating and benefitting from it pic.twitter.com/LErN3sAvTl

Make it stop! for the love of all things Kermit, Make it staaaahp! *ugly sobbing*

DJ Earworm Releases Mashup Of The Best Songs Of 2016

The world is devastated by the news that Britain’s Prince Philip, the Duke of Edinburgh, has died at the age of 99. Palace media confirms that the Duke has expired mid-day today, April 9th. The announcement did not contain any specifics on the cause of death. The United Kingdom will enter a state of national… END_OF_DOCUMENT_TOKEN_TO_BE_REPLACED

Who would have known that religious prophets would be among the most loyal supporters of former President Trump? In fact, it has been observed that the most conservative Christians may have been the right amount of push for Trump’s presidential win back in 2016. Since Trump’s election back in 2016, numerous self-proclaimed “prophets” have been… END_OF_DOCUMENT_TOKEN_TO_BE_REPLACED

President Biden falls and slips multiple times on the Airforce One Steps and PEOPLE ARE GOING CRAZY! What’s the big deal? Some people are hating, while others are making memes just for the fun of it. We are all human, aren’t we? Everyone’s expected to stumble some time in their lives. However, with the internet… END_OF_DOCUMENT_TOKEN_TO_BE_REPLACED