To a good number of us who aren’t as well versed in reading or playing to sheet music, they’re mostly very pretty dots on lines that are supposed to men, er, something. However, under the skilled eye of a trained musician, they have the power to turn those dots and lines into music to enthrall or move us.

And then, of course, there are the crazy, crazy types of sheet music. The kind that won’t even take any particular training or course to recognize as insane — just enough time spent on the internet, and a innate curiousity to learn things. We give you some of the most compelling pieces of sheet MusicNotes to turn viral online.

This piece has been vetted by music experts all over and earned the infamous title of “an impossible and unplayable piece”. And who can blame them when the sheet music looks like this?

IF you ook closely, it’s even got a number of particularly offbeat direction, such as “insert peanuts” “slippage may occur”, and “balance your chair on to legs”. On the next few pages, we’re treated to such gems as “release the penguins” and “like a dirigible”. True enough, this piece is practically impossible to play — unles you’ve managed to sprout a few dozen more able hands and fingers and live in one of Salvador Dali’s paintings.

So what’s the story behnd this, uh, unorthodox bit of classical music? Well, John Stump composed this as a satirical parody. According to his nephew, Stump relished creating nonsense pieces such as this infused with a lot of thought and erudite wit.

Thanks to the internet, we can now actually listen to what this piece is like and appreciate it in all its 8-bit glory. (Yes, 8-bit. Listen, and you’ll understand why.)

Aaaah, yes. The water temple level has never been more cultured and exciting.

In that proud noble spirit of satire, another noteworthy bit of sheet music comes. Just check it out:

That’s a face. That’s an actual face right there giving you the uncle side-eye and staring right at you from the sheet music. Everyone go home. Your argument is invalid.

Atushi Ojisama and Ijigen Waltz (from “A Tribute to Yamasaki Atushi”) is the brainchild of music composer Yamasaki Atushi. According to him, this was arranged by accident (?!?!), and based of “an ancient Cromagnon skinning chant”.

Okay. Let that sink in.

This piece features impossible jumps and key changes, enough to make even the staunchest orchestra-hardened musician nervously laugh of scream internally. This also features moteworthy instructions such as “sleep for two bars”, and “use a semi-ful pitching wedge to back the green.” (we’re not sure what that exactly means, either). At the bottom of the page, you see a teeny-tiny note wrtten in italics, “this music really stinks!” You gotta hand it to Mr Atushi, he knows it’s important to remind musicians not to take everything so seriously.

Here’s what this piece sounds like — if you end up thinking this could be a Vaporwave remixer’s dream come true, you’d be forgiven that. At least you now know what that face sounds like.

Hedwig must have been a very well-loved woman. It takes a special kind of feeling for someone to notate muic into your face — quite literally, too. 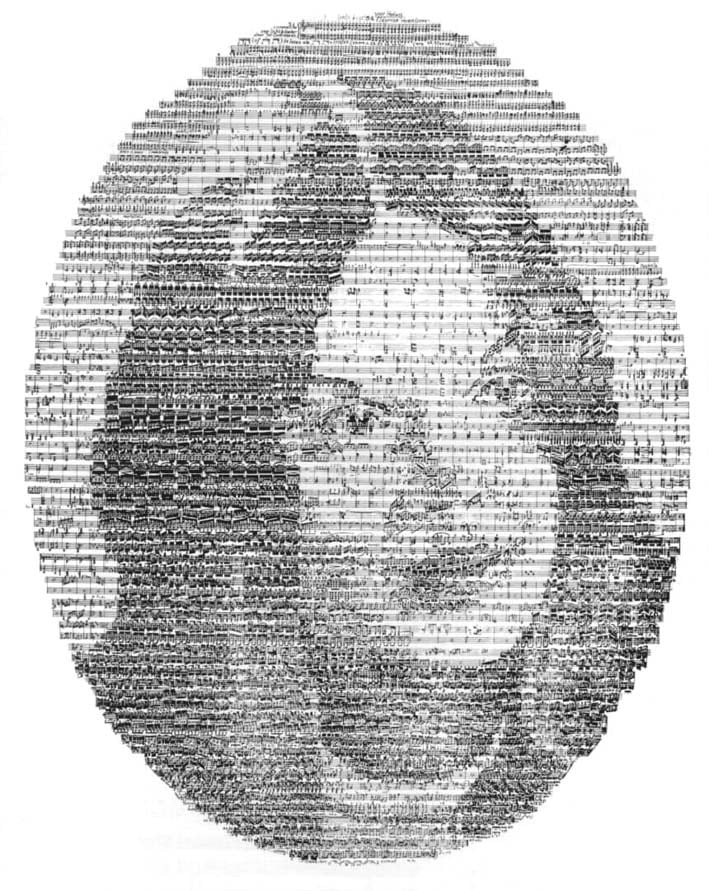 The Dutch composer Andierrssen grew up in a family of artists and musicians, and wanted to give his beloved partner a very, very special gift — Hence, the above sheet music. It took him from 1977 to 1983 to finish the portrait — a full six years as a token of his love for Hedwig. His uncle writes,””His music is as good as his graphic work, if not better, you can get lost in there, gorgeous..”

When played, the piece is nine minutes and twelve seconds long, and actually quite thoughtful too.

While this may not be quite about the sheet music itself, let’s focus first on the song that got memed into local popularity. “Tatlong Bibe” (Three Ducklings) is a children’s nursery rhyme sang in classrooms and playgrounds in the Philippines. It got boosted into the local pop culture consciousness thanks to it getting lypsynched with feeling by a child actor on the action-drama TV Series “Ang Probinsyano” .

Fans of the show went nuts over the song, so much so people started creating their own dances and versions of the song. It hit viral memedom heights when someone arranged this children’s rhyme into a rather airy, spirited classical piece.

Good job, Jane Neland, for making it quite pleasant and refreshing.

You may also enjoy:
This Beethoven-Mambo No 5 Mashup Wins The Internet
McDonalds Branch Uses Classical Music to Diffuse Violence
Classical Indian Musicians Cover Harry Potter Themes; Bring the Magic Back All Over Again