Is Trump Better At Social Media Than Clinton?

This Trump vs Clinton presidential campaign circus is almost to an end, I think we can all be thankful for that. However, a new study is getting both sides riled up again. Wait, were they ever calm?

The Next Web reports:

“According to a recent study from Finnish content discovery firm EzyInsights, Trump’s social media crew has consistently outperformed Clinton’s own team throughout the entire presidential campaign.”

The data was broken down into this chart. You know, in case you needed to really see it… 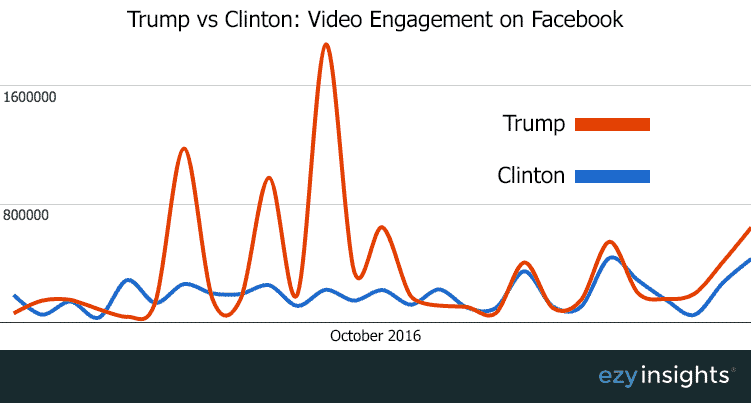 Trump has done 33 live video sessions in the month of October. That is triple of Clinton’s mere 11.

The report says that Trump looks better at Facebook because he focuses on posting more video and image posts than Clinton.

“Without digging too deeply into the actual content of the posts made, the most popular posts from each also tell a story about the strategies of both candidates. We can see that out of the non-video material, Trump has used photos which are very much in-tune with the way popular content is delivered on FB… Hillary Clinton [also] saw good results with a similar photo/text [approach to posts].”

The authors also point out that Trump has a lead in the number of followers oer Clinton with more than 11 million, compared to Clinton’s 7.7 million.

What do you think? Does it matter who “does” social media better?

#NakedTrump Takes Over The Internet While Naked Statues Take Over Cities