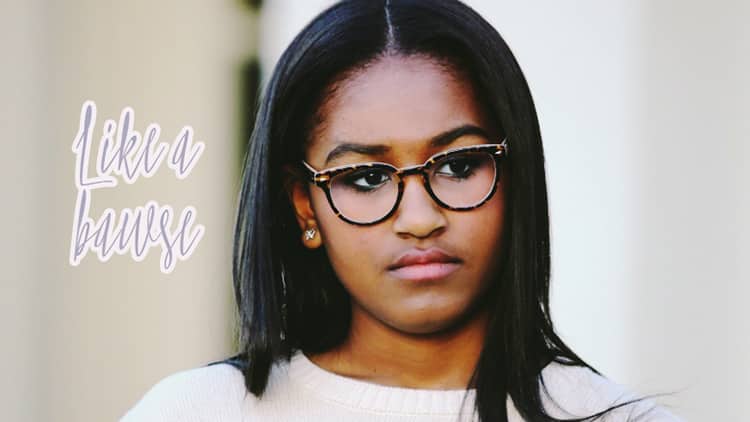 With less than 100 days to the ed of his presidential term. President Barack Obama is still up for making himself and his family the most memorable one — this time, it’s thanks to his daughter Sasha.  Folks, you know how it is: when a teenager schools you on using social media, you sit down and listen. Class is in session.

President Obama shared this anecdote with Jimmy Kimmel about an evening he asked Sasha to teach him about the joys of Snapchat. True enough, his daughter treated him to an impromptu lesson — and made him the star of a Snapchat post of hers.

Obama continued to relate how fascinating this all was. “I started talking to Michelle about the implications of social media and what all this means,” he said.

“Come to find out she [Sasha] was recording us the whole time, and then sent to her friends afterwards: ‘This is my dad lecturing us on the meaning of social media’. And she took a picture of herself sort of looking bored.”

While he chuckles about this, he also recounts how he does certainly have a phone — but it isn’t really a phone. Huh?

“I have email, but I don’t have texting,” he explains. “I now have an iPhone, but it is, you know, like the phone you give your two-year-old,” he grins. “Where they can pretend to press things but nothing actually happens. So my phone has no phone, no camera, no music…  All I have is the internet, and I can send emails. I think it also has that weather box.”

Ah. We feel you, Mr. President.

Watch President Obama share his story in the video below:

Teach Them How To Say Goodbye: Campaign Ad Has Obama Fans In Tears

Now that the election results are almost final, we all want to ask what’s going to happen to Donald Trump after leaving the office? All US Presidents inevitably reach the point where they leave the White House.  Besides, the constitution states that all US Presidents are subject to a two-term limit. What do former presidents… END_OF_DOCUMENT_TOKEN_TO_BE_REPLACED

This is the first time in modern history that the US held presidential elections in the middle of a pandemic. In truth, the US elections may have overshadowed COVID-19 and the side effects are limitless. America is facing a tough crisis of discontentment with the current administration. An understandable case but a situation that may… END_OF_DOCUMENT_TOKEN_TO_BE_REPLACED

America’s political climate has been seeing records of changes over the past few decades. However, US election results record a list of surprising firsts for the first time in a long time. With the power of the youth overpowering the US election results, we see how differently they see the world. It shows how inclusivity… END_OF_DOCUMENT_TOKEN_TO_BE_REPLACED