Christmas is celebrated around the world. However, different parts of the globe celebrate the major holiday extremely differently. There are literally hundreds of different traditions and many of them may seem completely bizarre. So, do you know where some of the most popular strange Christmas traditions come from and why they exist? Here a few that have always had us scratching our heads. 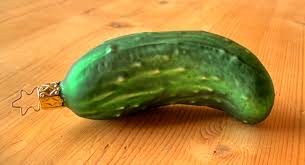 If you spot a pickle ornament on a friend’s tree on Christmas morning, make sure to be the first to point it out! This German tradition centers around a single pickle-shaped ornament. Usually made with blown glass, the ornament used is usually passed down through generations. Each Christmas morning, the green ornament is placed in a hard-to-spot area of the tree. When the children awake to check out their presents, they also try to find the cleverly placed ornament. The first child to find it receives a special present and legend claims that they will have good luck for the coming year.

The legend may have begun in Germany, but many people in Germany are unfamiliar with this tradition. It seems as if during the 1880’s a company began importing the ornaments to America and the trend caught on. So, you are more likely to see families participating in this tradition in the United States, rather than Germany.

Who hasn’t been to invited to an ugly sweater Christmas party? What was once considered a yearly gift from a knitting grandmother has become the main idea between large holiday gatherings. The uglier the better. At these holiday get-togethers, party goers try to outdo each other with the ugliest or tackiest sweater they can find. Many popular retailers have gotten into the trend and you can usually find an “ugly Christmas sweater” to wear. In fact, some stores even offer invitations and party decorations specifically for these type of holiday parties.

According to Time, ugly Christmas sweaters have been around for a long time. In fact, there was a time where the look was actually considered hip, a la Bill Cosby. However, now the green and red eyesores bring about feelings of nostalgia and Christmas’ past and remind us not to take everything so seriously during the holiday season.

Many of us have heard about the Austrian myth of Krampus as the complete opposite of jolly Santa Claus. It seems the folklore began in the Austro-Bavarian Alpine area and told the creepy story of a “half-goat, half-demon” being that punished naughty children. Some versions of the story say Krampus was Santa’s evil twin. The origin of the lore is unclear, but it has no doubt haunted children’s dreams for hundreds of years.

In traditional Austrian parades and celebrations, it is common to find men dressed as Krampus. There are also greeting cards and decorations that feature the wicked creature. Whatever the origin of the story, the story of Krampus seems like a great way to get those misbehaving relatives to mind their manners. 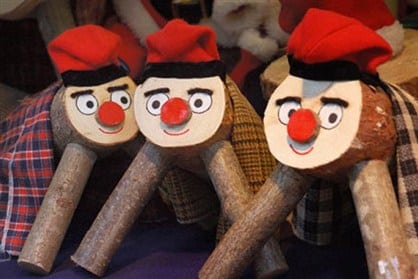 You may of seen one of these strange log creations, but never knew what they were. This tradition comes from Spain and is originally called Caga Tia. It hilariously translates to “the pooping log.” Basically, a hollowed out log is attached to wooden legs and decorated with a face. The strange creation is easily found in Spanish stores during the holiday season. However, in the US, this strange item might be a little harder to come by. Usually this tradition is only carried on by very traditional Spanish families.

The idea is similar to many other holiday traditions. Beginning on December 8th, participants must feed the “pooping log.” Then on Christmas day, the log is moved to the fireplace or similar space where the children beat it with sticks until it “poops” out fruit, nuts or small candies, depending on what he had been fed. While the children destroy the “pooping log,” this hilarious song is sang (of course, it is a bit different when translated): “Poop log, poop log. hazelnuts and cottage cheese, if you don’t poop well, I’ll hit you with a stick, poop log!” We are hoping it is just the translation that makes this song absurd. When the beating is over, one final item is dropped. Depending on the family’s preference, a salt herring, garlic bulb or onion is used.

Shake Up That Boring Christmas Gift Swap With These Great Ideas

5 Ugly Christmas Sweaters to Get You in the Festive Spirit