#SavePepe: When Did Pepe The Frog Get So Angry?

#SavePepe is the campaign recently launched by Matt Furie, the creator of Pepe the Frog. For those of you who aren’t Tweeting, Pepe the Frog has become the calling card for many Twitter users who are biased toward Trump (most of them have the word “deplorable” before their name). But he’s also being misappropriated by far more dangerously conservative Twitter users (see Anti-Semite). Furie recently teamed up with the anti-defamation group to launch his #SavePepe campaign.

Pepe the Frog first appeared in a series of comics on the website 4chan, which some of you might know is the site that members of Anonymous, the hacktivist group, prefer to use. He was a lovable character, known to poke fun at the establishment but certainly not burning any crosses. Enter 2016, the year of ridiculousness. A year when Nazi Frog Twitter is a legitimate phrase.

Okay, Nazi Frog Twitter just told me to check the lawsuit from the "ghostwriter" of Anne Frank's diary.

Furie released this comic on the website thenib.com to protest the use of his beloved character and chronicle the descent of one frog into madness. Pepe doesn’t really seem to have much of a body. Instead his face is used as a meme to express feelings ranging from happiness to rage.

Pepe even has his own reddit page where a change.org letter is circulating. The letter states that Hillary Clinton ran an article on her website in September that branded Pepe as a hate symbol. 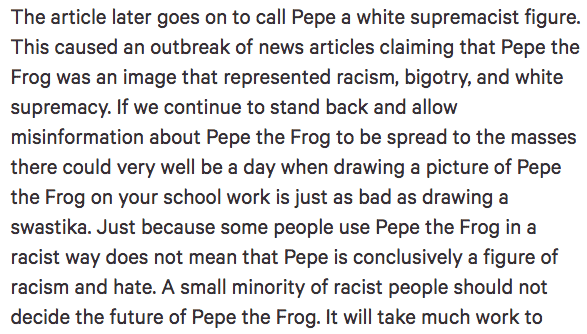 The goal of the petition is to get Hillary Clinton to retract her statement. Furie did an interview with The Atlantic after Clinton’s statement in which he basically said, “once you put something on the internet, you can’t control it.”