This Bag Reveals Something Important About Islamophobia

Islam has become a topic of contention for many politicians. Trump and many of his ilk have railed against it, have pinned many crimes and wrongful accusations against Muslim people. There’s a lot of fear-mongering happening around this religion. Though just how bad can it get?

Just take a look at this bag. How does it make you feel? 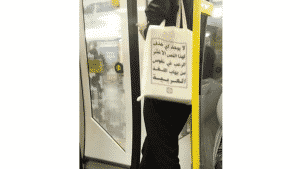 If your first reaction was to feel afraid or uneasy, well… That’s certainly something to think about, isn’t it?

Text on bag reads as: “This text has no other purpose than to terrify those who are afraid of the Arabic language.” pic.twitter.com/vHknRBQoPG

This totebag was spotted in the Berlin metro, and wants people to think about perceptions and attitudes surrounding Islamophobia, and to combat it with wit and class.

This bag is a product of the company Rock Paper Scissors, a graphic design and print studio based in Haifa, Israel. The company is run by Jammalieh, 29, and Haitham Charles Haddad, 27 , and recently showcased their own brand of wit and creativity in Germany.

Many of their products have Arabic on them. Why? Why not? The Palestinian duo explained it’s simply “because it is our language, and part of who we are, and we think it should be part of our urban landscape.” They recounted how this form of writing has begun fade in their own area. “We notice here that the Arabic language is starting to disappear from signs and public places.”

Social Media residents immediately showed their support for the bag and its special kind of cheekiness. The question persists: where can you buy one?

@zarahsultana @MaddowBlog Where can I buy one?

@zarahsultana @LovelyCorrine ooh I want one!

Kudos, Rock Paper Scissors! May your tribe increase, and may you spread the wit around!