It seems like every five minutes we’re seeing the political candidates questioned about their religious beliefs and a new Trump and Jesus website seeks to draw the differences between Trump and Jesus. Donald Trump hasn’t been attacked about his religion very much and he draws a lot of support from evangelical Christians. That’s important because they represent a pretty large demographic in the midwest and they always, always vote.

It’s been reported that Donald Trump has recently found Jesus… and had him deported.

This is probably the worst political t-shirt I've seen. I'm sure Jesus doesn't like it; I hope Trump doesn't either! pic.twitter.com/k0fiAmypqa

The last time that Trump came under fire for his religion was when the Pope criticized his “wall” and the Fox News group had a lot to say about that, calling the pope a political pawn. But, I’m afraid, the truth of the matter is that if the Pope wants to talk about somebody’s Christianity, he’s allowed to. He’s the Pope, in the direct line of Saint Peter. Just like the Dalai Lama is allowed to make decisions concerning the Buddhist principles.

And the new Trump and Jesus website is based on pointing out the differences between Trump and the founder of the world’s largest religion. The website is mostly just propaganda against Trump and his supporters will explain that they’ve taken Trump out of context and made him seem racist and positioned his most radical views against those of Christ, who in these quotes, seems very much like a socialist. 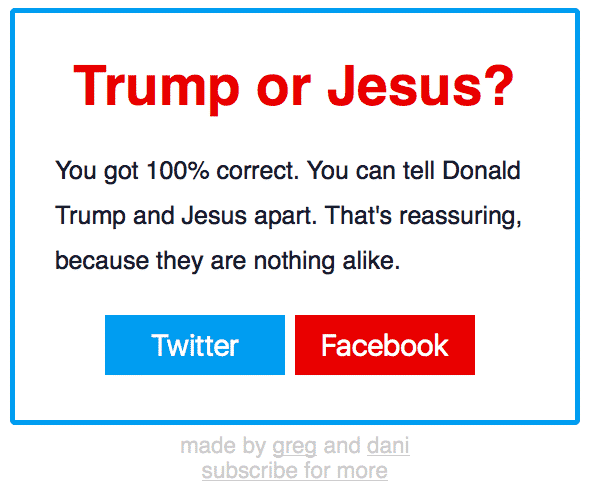 I’m happy to say that I got all of the answers correct and I can tell the difference between Trump and Christ. But after twelve years of Catholic school and around four thousand masses, I should be able to.

The New Hillary Clinton Pac-Man Commercial Is Worth Your Time

What In The Hell Are The #TrumpOlympics