Remember that post when we talked about why covering your webcam is actually pretty important for your privacy? There’s a brand-new case out there that just might compelling enough to convince you why it matters.

He’d been filmed through his own webcam by hackers — and now the hackers were charging him a ten-thousand dollar ransom, in order for this compromising video to not see the light of day.

“Matt, (which may or may not be his real name), initially thought this was an elaborate prank. He even challenged he hackers to go ahead and post the video on the internet. However, when the hackers responded with a screencap of all his friends and family members on Facebook, Matt began to realize this was no laughing matter.

Matt is no alone in this situation. Australia has started to see a rise in cybercrime. There have been 200,000 ransomware attacks in April-May alone this year, and these are just the reported cases. These types of attack resulted in millions of dollars or ransom payments. Although many of the numbers, whether reported or unreported, across the board are pretty nebulous, we do know for sure that it is happening. There are outfit that provide maps that show these attacks as they happen, and from which parts of the globe.

So, how does Matt’s story end? He does manage to barter the ransom amount from $10,000 down to $3,000. However, he changed his mind at the last minute, and posted this status instead for all his Facebook connections to see. 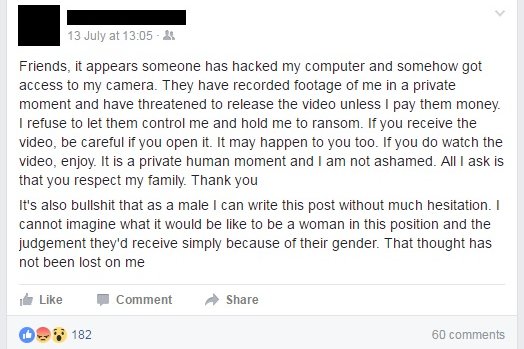 “I put up a Facebook post and let everyone know I was hacked,” he says in an interview.  “I let them know they got me in a private moment and they threatened to release a video unless I paid them money. I let everyone know if they get a link to be careful if they click on it, but if they do watch the video, then enjoy. It’s not something to be ashamed of.”

“It wasn’t an easy post to put up… “My own opinion is to not engage at all with the hackers. I wouldn’t reply.”

We applaud Matt for his courage and his mindfulness.

How to Keep Your Social Media Accounts From Being Hacked