Crime doesn’t pay, especially if you post it to Facebook. One Michigan motorcyclist learned that the hard way after being arrested after bragging about committing a crime on Facebook.

In a lengthy Facebook post, 33-year-old Michael Brown posted about getting away from the police during a high-speed chase. 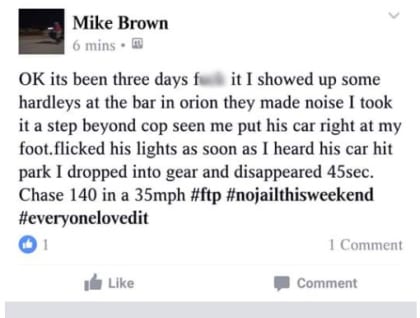 “OK its been three days f**k it I showed up some hardleys at the bar in orion they made noise I took it a step beyond cop seen me put his car right at my foot. Flicked his lights as soon as I heard his car hit park I dropped into gear and disappeared 45 sec. Chase 140 in a 35mph #ftp #nojailthisweekend #everyonelovedit”

Survelliance video from that night back up his account and show him burning rubber before a police cruiser pulls up. As soon as the officer turns on his lights, the motorcyle is seen speeding off.

Local authorities say they never would of closed the case and found this man if he wouldn’t of posted this to Facebook. In fact, he further incriminated himself by posting the speed he was traveling. Due to this high rate of speed, he is now facing a five year felony.

“Not only is it a confession, it also listed info that realistically only the motorist and the officer would know and that makes it then evidence,” said Lake Orion Police Chief Jerry Narsh.

He might of used #NoJailThisWeekend, but he definitely has jail in his future.

Mugger Apologizes On Facebook For Crime He Committed 35 Years Ago