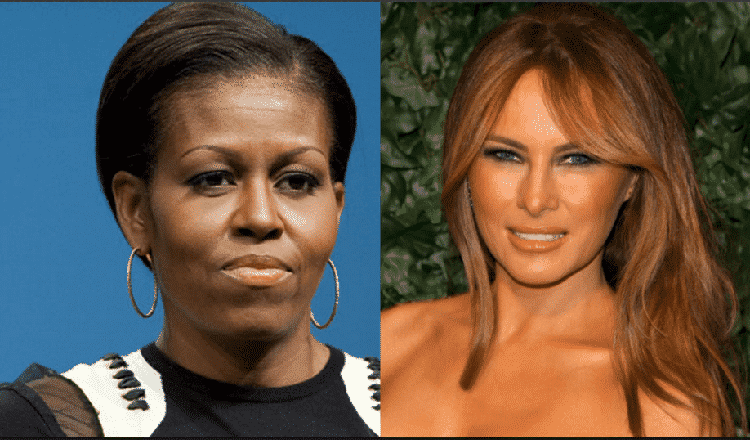 With her latest speech at the Republican National Convention, the words were compelling, touching, and struck a chord with many audience members soaking it all up. The problem?  These words may not have been 100% hers.

Internet sleuths are coming out with side-by-side video proof that many of the words and thoughts were taken word-for-word right out of First Lady Michelle Obama’s speech. See for yourself.

”I am serious. And don’t call me Shirley.” – #FamousMeleniaTrumpQuotes

“Luke, join me, and together we can rule the galaxy as father and son!”#FamousMeleniaTrumpQuotes

Let me make this quite plain. You have been told that a certain Dark Wizard is at large once again. This is a lie. #FamousMelaniaTrumpQuotes

… and yes, even Pokemon.

Even The Fresh Prince of Belair wasn’t safe.

“In west Philadelphia born and raised, on the playground was where I spent most of my days” – #FamousMelaniaTrumpQuotes

Mama Ru, is that you?

“I was born a poor, black child.” #FamousMelaniaTrumpQuotes

The whole alleged copy-paste fiasco was not safe either from ridicule.

“Make sure you put your name on your papers, kids.”
“M-i-c-h…M-e-l-a-n-i-a.”#FamousMelaniaTrumpQuotes pic.twitter.com/m0Ue2h3q5x

“If at first you don’t succeed,
copy and paste again.” #FamousMelaniaTrumpQuotes

When you youtube “how to give a speech”. #FamousMelaniaTrumpQuotes pic.twitter.com/srEboxDZbV

So, it all boils down again to this question: did Melania really plagiarize Michelle’s speech? We’ll let you decide.

The world is devastated by the news that Britain’s Prince Philip, the Duke of Edinburgh, has died at the age of 99. Palace media confirms that the Duke has expired mid-day today, April 9th. The announcement did not contain any specifics on the cause of death. The United Kingdom will enter a state of national… END_OF_DOCUMENT_TOKEN_TO_BE_REPLACED

Who would have known that religious prophets would be among the most loyal supporters of former President Trump? In fact, it has been observed that the most conservative Christians may have been the right amount of push for Trump’s presidential win back in 2016. Since Trump’s election back in 2016, numerous self-proclaimed “prophets” have been… END_OF_DOCUMENT_TOKEN_TO_BE_REPLACED

President Biden falls and slips multiple times on the Airforce One Steps and PEOPLE ARE GOING CRAZY! What’s the big deal? Some people are hating, while others are making memes just for the fun of it. We are all human, aren’t we? Everyone’s expected to stumble some time in their lives. However, with the internet… END_OF_DOCUMENT_TOKEN_TO_BE_REPLACED