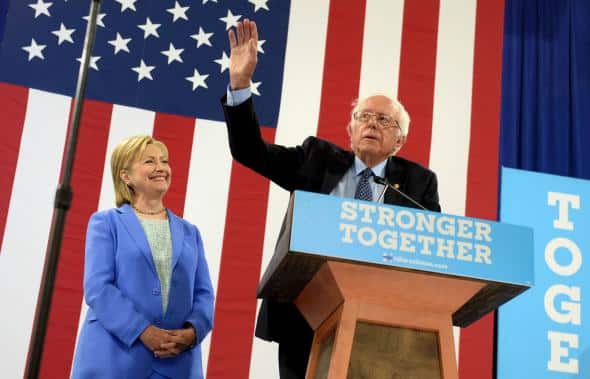 Enraged Bernie Supporters Apparently Missed the Point of His Campaign

As my colleague Alex wrote on Tuesday, Vermont Senator Bernie Sanders officially endorsed Hillary Clinton for president after a protracted battle to reshape the Democratic Party’s 2016 platform. Were it not for the endorsement, the progressive concessions Sanders scored would have likely been rejected, convention delegates would have voted for Clinton, and the Political Revolution would have been meaningless.

This act of compromise, not at all unusual for the deceptively pragmatic Democratic Socialist, has come to be seen as an act of treason by some of his more radical supporters. Uncompromising political voices are an admirable and essential part of the national discourse, but the vitriol puts me in the awkward position of concluding these Sandernistas hitched themselves to a wagon without bothering to consider its destination.

And yet the message had been written in garish colors from the beginning: the objective of Sanders’ presidential run was to reshape the Democratic Party from within, whether that involved a President Sanders or not.

If Bernie were going to run as an independent candidate, he would have done so from the beginning. The point of his campaign was to bring ideas outside the scope of the mainstream political sphere into the Democratic Party, which has both the infrastructure and influence to enact them. Independent political parties are important to what remains of our Democratic process. But they were never on the table for Sanders. That just wasn’t the point.

Still, Sanders was pressured into going against his word to support the eventual Democratic nominee. He kept his word and endorsed Hillary Rodham Clinton—after using his leverage with the Party’s revitalized progressive wing to score major victories in the DNC platform.

And just like that, the weak-minded individuals who supported Bernie because he was yet another political idol to be worshiped, instead of the mere figurehead for a wider populist movement, are retreating to the various holes they crawled out of.

That the Left is incapable of pragmatism is a stereotype sadly proven true. Centrism doesn’t work because you begin with concessions to the Right or Left, and therefore begin from a weakened ideological position. What we need is a Left that not only begins from a strong position, but has the discipline and fortitude to play ball when the time comes for it.

I’m hopeful the true Sanders Democrats will not forget this, and continue to fight for change from within the Democratic Party. If you truly believed it was ‪#‎NotHimUs‬, prove it by carrying the torch. Despite its Clintonian centrism, the Democrats are still viewed as representative of the American Left. And changing that Party from within is a far more realistic path than abstract notions of doing away with the two-party system. Ineffectual as it may be, no candidate yet has proposed a serious plan to overcome the massive hurdles inherent in electing a third-party contender.

Still, endorsing a morally bankrupt candidate like Clinton, whom Sanders supporters have rightly come to despise as a figurehead for Washington elitism, will inevitably earn the ire of independent purists whose demands – by their eclectic and unorganized nature – will never be met by anyone.

These individuals have the unassailable right to participate in the democratic process however they see fit. But they should have known the Political Revolution will be death by a thousand cuts—the United States has yet to destabilize enough to roll out the guillotines.

Where Will The Bernie Sanders Supporters Go?

Is Bernie Sanders Calling It Quits?

Will Smith disclosed in a podcast interview recently that he would “consider” running for president “at some point.” In an interview released Monday, the 52-year-old rapper told Crooked Media’s “Pod Save America”: “I think for now I’ll let that office get cleaned up a little bit. And then I’ll consider that at some point down… END_OF_DOCUMENT_TOKEN_TO_BE_REPLACED

Vaccination programs are currently on roll-out and countries that vaccinated for COVID-19 are talking. Questions are everywhere, and it is building up people’s anxieties about vaccination. How has the vaccine affected their population? Are the vaccines any good? Should we research more on newer vaccines? Can the vaccines kill the mutated virus? The answers change… END_OF_DOCUMENT_TOKEN_TO_BE_REPLACED

Texas Senator, Ted Cruz, received heavy criticism after taking a vacation to Cancun with his family in the middle of a crisis. The latest power crisis in Texas left hundreds of homes without electricity and water for more than 48 hours in negative degree weather. This has left the lives of many Texas residents in… END_OF_DOCUMENT_TOKEN_TO_BE_REPLACED