John Cho’s Sulu is Gay in “Star Trek Beyond”

Just like it says up top: John Cho is giving his character a progressive spin by portraying Hikaru Sulu as a gay man in the upcoming installment Star Trek Beyond. In the film, he is seen raising a daughter with a same sex partner as a pair of loving dads, according to Herald Sun. This is a clear nod to George Takei, who portrayed the helmsman in the TV series.

“I liked the approach, which was not to make a big thing out it, which is where I hope we are going as a species, to not politicize one’s personal orientations,” Cho shared with Herald Sun.

Now on its 50th anniversary, Star Trek is no stranger to taking steps into the progressive, unified future Gene Roddenberry envisioned for his universe. In 1968, it shook audiences with its first interracial kiss that was ever aired on US TV. Tskei himself did no have the liberty to come out as gay and risk losing his job in a much more close-minded time.

“If I wanted to work as an actor I had to keep it a secret,” Takei revealed last year. “Back then I couldn’t marry a white person — that was against the law here, miscegenation. But now I am married to a white dude so we have changed.” 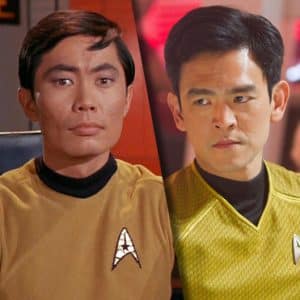 However, the person who has lobbied against this decision is the one most fans would least expect. George Takei himself is happy to see an original gay character in the Star Trek universe, but he feels it shouldn’t be Sulu. He maintains that the producers should have been faithful to Gene Roddenberry’s design of a canonically-straight Sulu. “I’m delighted that there’s a gay character,” He tells Vulture. “Unfortunately, it’s a twisting of Gene’s creation, to which he put in so much thought. I think it’s really unfortunate.”