Well done, UK. You’ve officially hit a brand-new level in intelligence ratings, though in which direction, we’d rather not say.

You’re even starting to give Texas ideas with what might be #Texit. Good luck with that.

Meanwhile, Donald Trump is yet experiencing another bad case of foot-in-mouth disease with his newest tweet on #Brexit:

Just arrived in Scotland. Place is going wild over the vote. They took their country back, just like we will take America back. No games!

To which the good people of Scotland disabused him of his ill-gotten notions, and treated the rest of the world to some delightfully creative and colorful British profanity.

@realDonaldTrump Scotland voted IN you moron

@realDonaldTrump you couldn’t be more out of touch with reality if Nessie bit you on the arse you utter fool. Scotland voted REMAIN.

@realDonaldTrump Scotland voted to stay in the EU you cock juggling thundercunt! 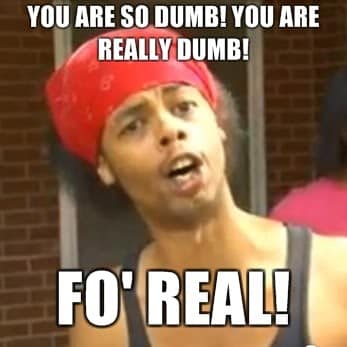 Tumblr ( with some posts courtesy of Facebook) also had much to say about the insanity.

Contingency plans are in motion.

How anyone can trust this man’s opinion is beyond me. We are a laughing stock of a country. Thank you #Brexit. pic.twitter.com/zWmVW67eVn

Brexiteers don’t seem to realise there is a difference between living in the past and learning from it. #REGREXIT

“I didn’t think was going to matter”
“I thought it was a protest vote”
“Next time, I’ll vote remain”#Regrexit pic.twitter.com/dPZrqZ2aCd

This man who voted Leave is aghast that his vote actually happened. Why? Simply because he thought his vote didn’t really matter, and now he’s “quite worried”. (Folks, this is what happens when you make decisions that aren’t carefully thought through. Bad things happen.)

Did people call him out? You bet.

To the man on @BBCNews in Manchester who voted leave but is now “shocked” that his vote mattered and is now “worried”, well done sir. Moron.

@suziewright94 “I thought everyone else would vote to stay” was response I got this a.m. #gobshites

Are you actually joking, man on @BBCNews?! ‘I voted to Leave, didn’t think my vote would matter’. LITERALLY UNBELIEVABLE

The younger denomination of 18-24 year olds in the UK decried the final outcome of the vote. “A 90-year-old has more of a say in our lives than we do,” one teenager declared in the video below.

And now, a New Scotland independence referendum — a country that primarily voted “Remain” — is “highly likely”. This could be very well a new “Scexit”, this time out of the United Kingdom.

This observation, written by a commenter named Nicholas on The Financial Times‘ website, enumerates Brexit’s ‘three tragedies’ quite eloquently.

The most articulate take on #Brexit is actually this FT reader comment today. pic.twitter.com/98b4DwsrTV