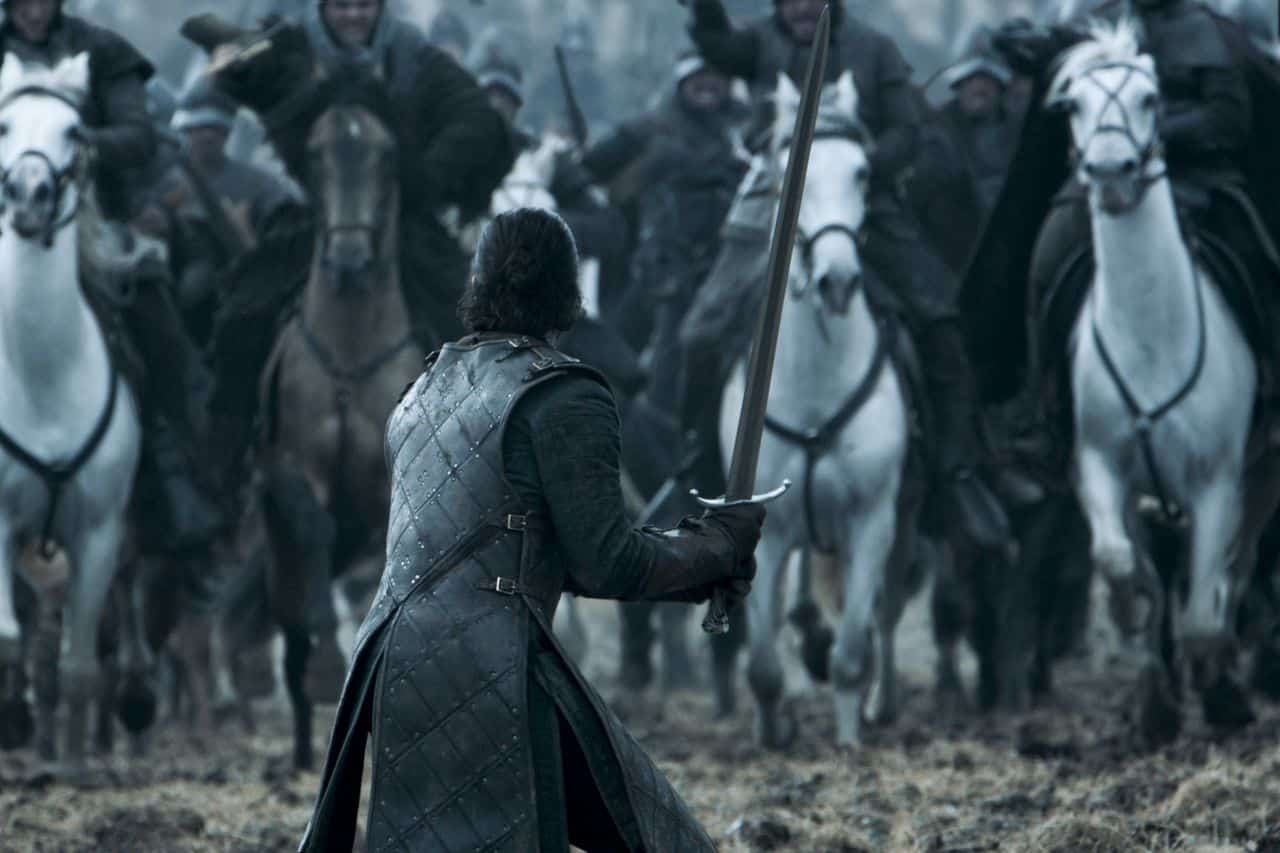 Battle of the Bastards will be remembered as the most disturbingly realistic battle sequence in television history.

Television battles, even on HBO, tend to pull their punches. Especially in the context of gory medieval combat, the mere suggestion of the carnage and panic and terror is usually enough to send audiences the message. In the case of Game of Thrones, HBO’s critically acclaimed adaption of George R.R. Martin’s A Song of Ice and Fire series, full-scale medieval warfare has generally been forgone in favor of one-on-one combat and compelling political intrigue—only occasionally depicting battles, and to great effect.

Last night’s episode, appropriately titled ‘Battle of the Bastards‘, leaves nothing to the imagination: the horrors of battle are exposed from beginning to end, and they’re equally thrilling as they are terrifying and disturbing.

The episode begins with Daenerys Targaryen (and her dragons) defeating the masters of Essos once and for all. The hopeful tone of the episode quickly dissolves when the cameras are turned back to Jon Snow and Sansa Stark’s struggle to retake Winterfell.

Snow’s army is outnumbered, ill-equipped, and composed primarily of wildlings still reeling from an encounter with the White Walkers. Taking on Ramsey Bolton, whose ruthlessness on and off the battlefield makes him a dangerous opponent on reputation alone, there was virtually no hope for Snow and his men to emerge as the victors—until a last minute cavalry charge saved the day Helm’s Deep style.

While the storytelling and character motivations are somewhat underwhelming, ‘Battle of the Bastards’ will make history for its brutally realistic depiction of medieval warfare. With Wun Wun representing the only fantasy element in the sequence, the showdown rivals the opening 25 minutes of Spielberg’s ‘Saving Private Ryan’ for its sheer visceral power.

The chaos and randomness of the battlefield is a striking, disturbing reminder that most men who find themselves in these situations rarely have time to collect themselves before meeting their end. The Bolton army’s arrow volleys are reminiscent of German machine-gun fire wiping out entire landing crafts before any men could even reach the beachhead.

But ‘Battle of the Bastards’ doesn’t simply retread on the gory cinematic territory we’ve seen before. The phalanx sequence, wherein Ramsey’s troops surround Snow’s men and herd them into such a tight crush that they’re in as much danger from enemy spears as they are from the bodyweight of their fellow brothers-in-arms, is so panic inducing it’s easy to forget it was a real military tactic for millennia.

Despite the heavy onslaught, first of arrows and then of cavalry, Jon Snow seems to have fate on his side. In the episode’s most thrilling moment, Snow skillfully dodges attacks and disposes of Bolton troops—but it’s clear he wouldn’t have survived were it not for luck. And although it’s plausible that Jon has some divine backing, what the sequence really demonstrates is that Jon Snow is no longer a man who fears death—and when death can come as swiftly and randomly as it did in the very real conflicts of antiquity, that’s a useful quality to have.

Will Smith disclosed in a podcast interview recently that he would “consider” running for president “at some point.” In an interview released Monday, the 52-year-old rapper told Crooked Media’s “Pod Save America”: “I think for now I’ll let that office get cleaned up a little bit. And then I’ll consider that at some point down… END_OF_DOCUMENT_TOKEN_TO_BE_REPLACED

Vaccination programs are currently on roll-out and countries that vaccinated for COVID-19 are talking. Questions are everywhere, and it is building up people’s anxieties about vaccination. How has the vaccine affected their population? Are the vaccines any good? Should we research more on newer vaccines? Can the vaccines kill the mutated virus? The answers change… END_OF_DOCUMENT_TOKEN_TO_BE_REPLACED

Texas Senator, Ted Cruz, received heavy criticism after taking a vacation to Cancun with his family in the middle of a crisis. The latest power crisis in Texas left hundreds of homes without electricity and water for more than 48 hours in negative degree weather. This has left the lives of many Texas residents in… END_OF_DOCUMENT_TOKEN_TO_BE_REPLACED