Euro 2016 Tournament Is Underway And It Has Changed A...

As the 2016 UEFA Euro soccer tournament is underway, all eyes are on the events in France. The tournament is already making headlines already for more than just the sport. With fans turning violent and tensions running at an all time high, some teams could face expulsion if their crowds don’t get it under control.

Despite this year’s fiasco, the UEFO Euro tournament has been going on for fifteen years now and much has changed over the years. In fact, this is the first year that the tournament was expanded to including 24 teams, as opposed to the normal 16. The matches will be played throughout France in ten cities, Bordeaux, Lens, Lille, Lyon, Marseille, Nice, Paris, Saint-Denis, Saint-Étienne, and Toulouse. The final winner will go on to play at the 2017 FIFA Confederations Cup in Russia.

With such a rich history, one website is taking a look at the evolution of the tournament. We were surprised by how much things have changed. This interesting infographic doesn’t just take a look at how much the uniforms have changed, but it also list which countries won the championship throughout the years. 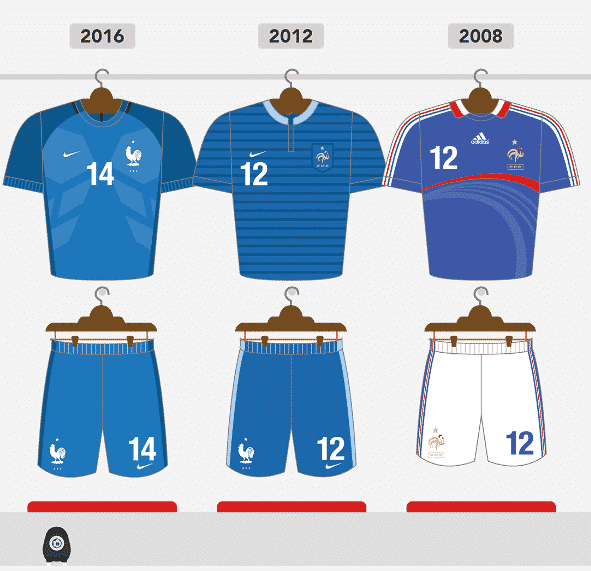 Germany and Spain have three wins, while Italy only has one.

The graphic also takes a look who had the fewest goals conceded, the highest scoring team, hosting country and tournament winner.

Here is the infographic in its entirety: